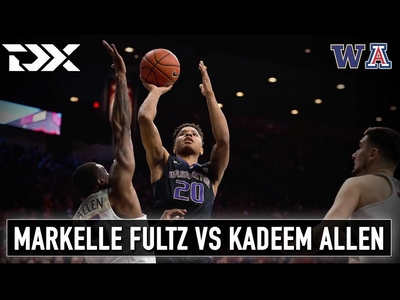 Fultz an 18 year old freshman and projected #1 pick in the draft, was assigned a difficult matchup in the form of 24-year old senior and JUCO transfer Kadeem Allen, known for his exceptional perimeter defense and overall toughness.

Allen was able to bother him into one of the worst games he's played at the collegiate level this season, shooting just 8-23 from the field. His length, quick feet, physicality, technique and tremendous effort level were on full display.

Fultz still had a few nice moments en route to his 16 points, showing the ability to change speeds and create his own shot, missing a few looks that he normally makes, but overall this was far from a vintage performance from the freshman.

Allen took full advantage of the many scouts and executives in the building to demonstrate to talent evaluators that he's a NBA caliber defender. The question now becomes whether he does enough on the other end of the floor to warrant a roster spot.

Mike Schmitz is the video analyst for DraftExpress. Follow him on twitter and check out the DraftExpress Video section. He will be breaking down the NBA draft in digital format all year long for us.
Read Next...