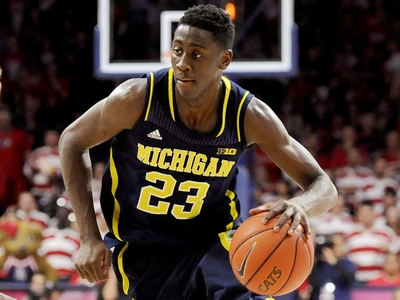 Already in the midst of a somewhat underwhelming season, Caris LeVert was delivered a major setback this week learning he suffered a complete fracture of his left foot, which will require a second surgery and another 12 weeks off basketball activities. The injury ends LeVert's junior season after just 17 games, with his Michigan team stumbling to a 10-7 start, including losses to NJIT, Eastern Michigan, SMU and Purdue. 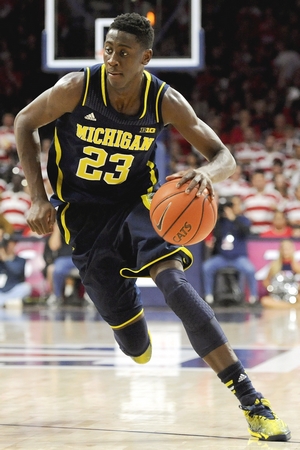 While this is certainly an obstacle to his professional aspirations, it might not be a deal-breaker as far as the 2015 NBA Draft is concerned. Scouts have had over 50 games the past season and a half to evaluate LeVert as a prospect against some of the best competition in college basketball, and as long as his foot heals accordingly, he should be able to participate in some or all of the NBA pre-draft settings teams like to put players through in the lead-up to draft night.

As a 6-7 guard who can essentially play all three backcourt positions, LeVert certainly has his strong points as a pro prospect. He's a highly skilled offensive player, showing the ability to handle the ball, operate smoothly at different speeds, find the open man in a variety of situations, and finish plays with a soft touch. LeVert could be viewed by teams as a sort of poor man's Dante Exum, a big, versatile guard who is unselfish and smart and can be used alongside a variety of different types of players, be it on or off the ball. His ability to handle the ball in transition, as well as in pick and roll and isolation situations is very intriguing at his size, and unlike many big guards, he has very good mechanics on his jumper and is consistent in catch and shoot situations.

Because of his size, solid length, quick feet, and strong anticipation skills, LeVert also has nice potential and versatility defensively. He has shown the ability to stay in front of point guards at the college level, and even though he currently lacks the strength to contain some of the bigger and more physical wings he'll encounter in the NBA, he has a young frame that should continue to fill out as he matures in the next few years.

As someone who was barely an afterthought on most NBA scouts' notebooks just a year ago, LeVert obviously has things he needs to work on. The first, and something we touched on, is his immature frame, which is typical of many late-bloomers in his mold. This affects him as a finisher around the basket, where he converted just 50% of his attempts this season, and 48% last year. He tends to shy away from contact at times and doesn't appear to be the toughest player in the world, often settling for pull-up jumpers in the mid-range area rather than taking the ball strong all the way to the rim, evidenced by his poor free throw rate (4.1 attempts per-40).

His lack of strength is also a hindrance defensively. He tends to get pushed around at times by stronger players, especially when he's used at the small forward position, which he frequently was this year alongside the extremely undersized backcourt duo of Spike Albrecht and Derrick Walton. He'll have to continue to add weight to his frame to hold his own against NBA players.

LeVert's mid-range game is not a strength of his at this point, as he's far more comfortable in catch and shoot situations (44%, 61/138 as a sophomore and junior) then he is pulling up off the dribble (25%, 47/186). Considering his limitations as a finisher around the basket, this is something he'll have to continue to work on to not be rendered a one-dimensional player in the NBA.

Even before his injury, there were some concerns about drafting LeVert too high due to his somewhat passive nature. He didn't look comfortable as Michigan's go-to guy this season, as he's clearly better suited as being a complimentary player who can contributes with his versatility and intelligence rather than being the focal point of an offense.

Despite being a junior, LeVert is still fairly young, not turning 21 until the end of August, which makes him younger than six of the 22 sophomores in our top-100 rankings, and only six months older than some of the freshmen even. His youth and extremely immature frame (he reportedly came to Michigan weighing just 162 pounds) almost led him to being redshirted as a freshman until the coaching staff decided to expand the rotation in December. With that in mind, it's not out of the question to wonder if LeVert still has significant room for improvement over the next few years, far more than your typical college junior. His frame has made major strides, and he's improved by leaps and bounds since arriving at Michigan. Clearly his work ethic is outstanding.

That same work ethic may have been his downfall over the past year or so, though. He missed much of the summer with a stress reaction in his left foot that required surgery, and now saw that same foot suffer an outright fracture. NBA teams will want to take a close look at his physical to figure out how much of an issue that may or may not be for him down the road.

LeVert will need to decide now whether or not to return to Michigan for his senior season. The feedback he gets from NBA teams in the next few months will likely play a large role in that. While this is not considered a weak draft at the moment, it does look fairly shallow at the guard positions, which could help LeVert's stock.