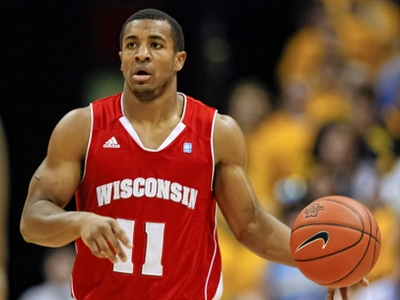 Walker Beeken
@DraftExpress
Jordan Taylor came out of nowhere seemingly to establish himself as one of the best point guards in college basketball. What does that mean for his NBA draft stock?

Wisconsin's Jordan Taylor has emerged as one of the most improved players in the country in 2010-2011. The junior point guard has gone from having an average sophomore season to improving his production in virtually all areas of his game as a junior and becoming one of the premiere point guards in the college game.

Taylor has stepped up to play big minutes this season under coach Bo Ryan, and he's been a catalyst for the Badgers so far, running the team's offense and scoring from the point guard position, and doing so in a very efficient manner, while sporting an outstanding 29.2 PER, good for 7th best amongst all point guards in our database.

From a physical standpoint, Taylor lacks the physical tools of a prototypical NBA point guard prospect. He's a bit on the small side at 6'1 with a strong, sturdily built frame, and athletically, he doesn't have the speed or explosiveness that scouts might like to see from an NBA player his size.

While Taylor hasn't completely come out of nowhere (he played 29.5 minutes per game last season), his improvements from season to season have been tremendous. A big key to these improvements has been the strides he's made as a shooter. His percentages from the field, 3-point arc, and free throw line were terrible his freshman season, but he's turned himself into a very solid shooter, connecting on 85% of his free throws and 42% of his 3-pointers this season.

Almost 70% of Taylor's shot attempts are jumpers, and his effectiveness as a shooter has really opened up the rest of his game. He actually shoots more jumpers off the dribble than he does off the catch, and he shoots a better percentage off the dribble as well, smoothly dribbling into his shot going either direction, and comfortable pulling up behind the arc or in the mid-range area with a quick release.

Much of Taylor's success off the bounce comes from the strength advantage he has over nearly any point guard he faces at the college level. He makes up for his lack of explosiveness by changing speeds and overpowering defenders and using his strong body to bump them and create space, either for his jumper or to get to the basket.

Taylor doesn't get to the rim off the dribble often, but when he does, he's able to use his strength to finish, as he shoots a solid 62% on shots around the basket, and also gets to the free throw line at a high rate. He's shown flashes of an effective floater in the lane as well, which will be an even more important shot for him to have as he attempts the transition the NBA level, where he'd face longer, more athletic defenders in the paint. Even at the college level he struggles to score efficiently inside the arc at times, as evidenced by his sub-50% shooting from 2-point range. This is unlikely to improve in the NBA, which is what makes his perimeter shooting ability so important. 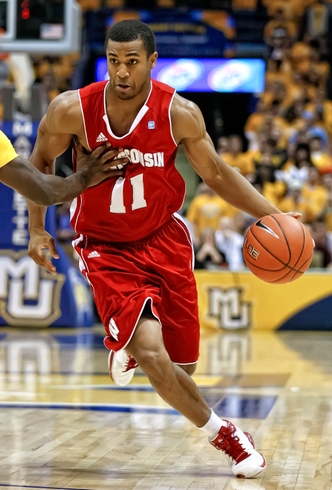 Coach Bo Ryan shows tremendous trust in Taylor, and although the Badgers do run a methodical offense with lots of ball movement, Taylor still has the freedom to make plays, either off the pick-and-roll or isolation opportunities. He embodies Wisconsin's mistake-free, efficient, style of play on the offensive end, playing at a nice pace and showing great poise and decision making skills, as evidenced by the fact that he leads all players in our database in both assist-to-turnover ratio and pure point rating. He commits a shockingly low amount of turnovers relative to the huge role he plays for Wisconsin, which bodes well for his likely-future as a low-mistake backup a coach can count on for solid minutes off the bench.

As a defender at the college level, Taylor does a nice job defending point guards, utilizing his strength, toughness, and smarts. These traits will help him moving forward, but there will be questions about how well he'll translate defensively. He could have trouble staying in front of quicker guards in space as his lateral quickness appears to be just average, and his lack of elevation and length will hurt him challenging shots and defending dribble penetration.

Overall, Taylor has made outstanding strides as a player in each season he's been at Wisconsin, which is very encouraging. He doesn't possess the ideal physical attributes for a point guard prospect, but he's been far too productive to ignore this season. While his bulky frame and strength advantage may not translate to the NBA, his shooting ability and decision making are extremely valuable skills that make him worth keeping an eye on. He'll likely still be at Wisconsin for another year, and if he's able to continue to build on this season's success while working on maximizing his athleticism and shot-creating ability, he'll be a guy that NBA teams will surely take a long look at as a potential backup point guard candidate.
Read Next...