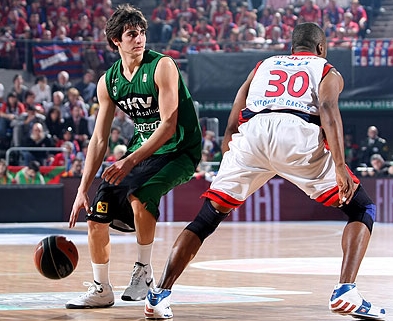 Whether this is mere posturing on Fegan's part is unclear. But if there are obvious obstacles -- including a reported $6 million buyout from Rubio's contract with DKV Joventut  many scouts and coaches familiar with Rubio think the Grizzlies would be wise to surmount them.

"He is by far the smartest player in the draft," Givony said. "His knowledge of the game, his overall feel its amazing. Wherever he goes, those fans are going to fall in love with him. He's such a fun player to watch, so unpredictable, so creative. To me, it's a no-brainer for a franchise like Memphis."

This weekend we were able to learn quite a bit more about the Rubio situation, after speaking with one of the best possible sources on this matter. Unfortunately this source would rather not be named, for obvious reasons. Regardless, this is information that almost anyone interested in the NBA draft would like to read, though, so we decided to run it.

From what we can gather, Rubio is most certainly going to want to have a large say in the team that drafts him, and if hes not satisfied with where he lands, he may just decide not to ever come over, which would obviously be a huge embarrassment for the team that picks him. He is in a great situation with his hometown team outside of Barcelona, and it wouldnt make sense to leave there for anything less than the perfect spot from his standpoint.

The bottom line here is that Ricky has a large buyout5.75 million Euros, both for this year and the year after. Depending on the team that selects him, hes going to make a decision on whether he comes over or not. If hes not satisfied, there is a very real possibility that he doesnt come. His buyout is going to cost him a lot of money, and if it doesnt make sense for him, he wont do it. He is going to have to pay for the privilege of playing in the NBA

According to the source, Rubios decision is going to come down to two things: winning and the role hell play for the team that picks him. The size of the market of the team that drafts him is apparently irrelevant, since his appeal will be on a global scale, reaching far past his teams city limits.

With that in mind, it appears that the Memphis Grizzlies will have to make a very strong sales pitch to Rubio for him to move off his initial stance of not wanting to play for them. Rubios concerns stem from a number of factors, ranging from the potential poor fit of playing alongside a very ball-dominant guard in O.J. Mayo, to the negative experiences conveyed to him by the likes of Juan Carlos Navarro and Pau Gasol.

Oklahoma is a more attractive situation, but there are concerns there about how he fits with Russell Westbrook and whether the two can play together. For now they are not being ruled out.

The question now is how Memphis will respond. Can Chris Wallace and company convince Rubio that his concerns are unfounded? The Grizzlies have not made it a secret that they consider O.J. Mayo to be their point guard of the future, and it may be in their best interest to maximize the asset in the words of our source, by trading the pick. This is not going to be a hostile situation, though, so dont expect any fireworks in the media. Behind the scenes, efforts will be made to steer him the direction of the teams that appear to be most attractive, mainly Sacramento, Dallas, Indiana, Portland and New York, although not all those teams may have the assets or the interest level needed to get a deal done with Memphis. At this stage, Rubio appears unlikely to pull out of the draft.

Whats interesting is that Memphis scouting mission to Spain this weekend may not have gone quite as well as planned, as Rubios team was beaten handily by Real Madrid in game three of the playoffs, behind a very average showing by the Spanish prodigy. Rubio posted 6 points, 3 assists, 5 turnovers and 3 steals on 2/6 shooting in 26 minutes of action. Both Memphis GM Chris Wallace and head coach Lionel Hollins were in attendance.

 Nick Calathes will bypass NBA to play in Greece

Chris Harry of the Orlando Sentinel broke the very interesting story this weekend of Nick Calathes decision to sign with Euroleague champions Panathinaikos of Greece.

Calathes, the state's two-time "Mr. Basketball" from Lake Howell , agreed to terms Friday to play for powerful Panathinaikos , the reigning Euroleague Basketball champion club based in Greece, according to sources close to the former Gators playmaker.

Neither Calathes nor his family would comment on the development, pending announcements from Panathinaikos and UF. Gators Coach Coach Billy Donovan apparently was informed of his player's decision Friday night, with at least one source saying a contract was signed.

The deal, sources said, will pay Calathes around $1.1 million per year, in addition to providing him with a home, car and tax credits, making for a total package commensurate to what the NBA rookie salary scale provides a late-lottery selection. Golden's State forward Anthony Randolph, the final lottery pick of 2008 at No. 14, made $1.424 million as a rookie.

With his Greek heritage and dual citizenship, Calathes figures to be a popular figure in Athens. In addition to joining arguably the world's most elite overseas franchise, there should be endorsement opportunities aplenty, and the built-in honor to represent his country in international competition. Last summer, he played for the Greek National Team during the FIBA Europe Under-20 championships.

This move is interesting for a number of reasons, but has appeared to draw the ire of the college basketball community, who cannot understand why he would chose Europe over the NCAA or the possibility of playing in the NBA.

The reasoning is pretty simple. It comes down to money.

Calathes 3-year, 2.1 million Euro contract gives him an incredible amount of financial security, while still providing the opportunity to continue to get better on the most competitive team in the world outside the NBA. In addition, his very comfortable buyout situation means that he can return to the States as early as next year if he pleases.

Much of the criticism Calathes is receiving stems from the fact that he is considered by many to be a potential late-first round NBA draft pick. If there is anything weve learned from covering the draft over the past six years, its that it is virtually impossible to project who will ultimately get drafted in the late first round and who will slip to the second. Calathes could very well have gone in the 30s and ended up with a non-guaranteed contract, only to get cut in training, as many second rounders often are.

If anything, Calathes may have improved his draft stock with this move. There are a number of teams in the late first roundsuch as New Orleans, Minnesota, Oklahoma City and Chicago who either have multiple picks or may not be interested in adding another guaranteed contract/roster spot to their team at this point. The fact that Calathes will play for one of the most decorated coaches in the world in Zeljko Obradovic on someone elses coin and come back a much better player in one year has to look attractive. With Sarunas Jasikevicius reportedly on the way out of Panathinaikos, a decent amount of playing time will be opened up for him.

Although Calathes will forgo attending the NBA draft combine and the group workouts hes scheduled for in Golden State, Minnesota and New Jersey, its not a given that he withdraws from this draft just yet. He will reportedly be very selective with the teams he decides to visit and make the call on June 15th based on what hes hearing. Although he probably would like to go in the first round from an ego perspective, it may make more sense for him financially to be drafted in the second round now, as that would leave more flexibility for his agent to negotiate his rookie contract next season. Lately were seeing European players like Victor Claver and Christian Eyenga do whatever they can to avoid the rigid salary structure of the rookie scale and not fall into the trap that Rudy Fernandez and Tiago Splitter fell intobeing forced to give up substantial amounts of money for the right to play in the NBA.

-NBA sources continue to indicate that the Los Angeles Clippers are entertaining offers for the #1 pick. Despite their initial comments made on draft night about having already decided to pick Blake Griffin, they are keeping all their options open for now. From what I understand, they didnt want to sound uncertain on draft night, since thats a typical Clippers reaction. This is a very important time for them in terms of season ticket renewals, which is why they had that kneejerk reaction.

-Jonny Flynn appears to be drawing strong interest from the Milwaukee Bucks, as it becomes increasingly clear that they will not be able to retain the services of current point guard Ramon Sessions, due to his excessive contract demands.

-The Warriors are rumored to have strong interest in Brandon Jennings according to several NBA teams drafting in their area, although they may decide to go in another direction if they are able to execute a trade with the Clippers for Baron Davis.

-A source with the Oklahoma City Thunder indicated that there is no truth to the rumor that they are considering trading the #3 pick to Washington for Javale McGee and the #5 pick.

-NBA agency Wasserman Media Group held a workout on Friday in Los Angeles to showcase their 2009 draft clients, including James Johnson, Gerald Henderson, Wayne Ellington, DaJuan Summers, K.C. Rivers, Jimmy Barron and Josh Shipp. There were six teams there reportedlySacramento, Charlotte, Portland, Toronto, the Clippers and Lakers, and various others immediately before or after, including Detroit, Memphis and Oklahoma City. We spoke to two teams who were there, and both mentioned that James Johnson looked extremely impressive. DaJuan Summers also reportedly had his moments and Gerald Henderson looked small, but very athletic, even if his 3-point shot was off.

-In Italy, Jonas Jerebkos Angelico Biella team has pushed Brandon Jennings Lottomatica Roma squad to a decisive fifth game in the playoff quarterfinals. Jerebko had a strong showing in game three with 16 point, four rebounds and five steals. Jennings has not played a single minute in the series yet since his team was forced to go over the limit for foreigners when two of their Italian big men were injured and replaced by Slovenian Jurica Golemac.
Read Next...