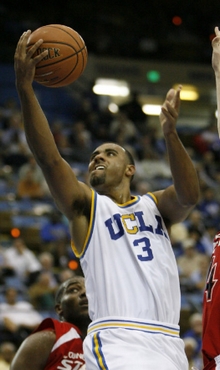 Joey Whelan
@DraftExpress
Josh Shipp picked up right where he left off last year, providing UCLA with solid, versatile contributions from the wing, but is now doing so on much improved efficiency. At 65 and 220 pounds, Shipp has a strong build for a wing, and hes a decent athlete as well. Shipp has steadily improved his production and efficiency in his four seasons at UCLA, even after hip surgery allowed him to play just four games as a sophomore.

Shipps game starts from behind the three-point arc, where hes made excellent strides with his shot, shooting .405 this season, up from .316 last season. Hes also taking more than half of his overall field goal attempts from behind the arc, well up from last year, where about 37% of his shots came from behind the arc. Shipp is an excellent shooter from deep when he has time to get his feet set and isnt rushing things, showing very good mechanics on his shot. He runs into some trouble when shooting on the move, though, with his accuracy falling off considerably, and him having a tendency to rush his shot, resulting in sloppier mechanics. For that reason he isnt much of a threat shooting off screens, even though hes constantly running through screens on offense. To his credit, he seems to find ways to get wide open very often, and gets a lot of clean three-point looks, which he hits with very good regularity.

Shipp also has a nice semblance of a dribble-drive game, showing good ball-handling for a wing with both of his hands, and the ability to drive towards the basket coming off a screen or in isolation situations. His dribbling isnt outstanding, though, and he doesnt show much ability to quickly change directions with the ball in the lane. His creativity around the rim could also be better, not showing much ability to finish with his left hand, and getting into trouble committing charging violations more than your average player. He shows a good ability to get space for a mid-range game, but doesnt have the greatest accuracy on his shots there, something hell definitely need to improve on to stick around at the next level. He shows flashes of a nice right-handed floater, which is definitely something he should continue working on.

Shipp does a good job contributing in other ways on the offensive end as well, being an above average passer for a wing, showing the ability to handle the ball on the perimeter when necessary, and often getting ahead in transition, where he uses his athleticism to finish well at the rim.

On the defensive end, Shipp has good hands and plays the passing lanes well, picking off some passes and starting fast breaks, but his man-to-man defense leaves a lot to be desired. He shows a good fundamental base and doesnt seem to take plays off, but his lateral quickness is extremely questionable, with him routinely getting beat in isolation situations in the early going this season. He also shows a lot of trouble chasing guards around screens, often getting caught, leading to a wide-open shot for his man. These are major concerns for him when projecting to the next level.

Shipp is a very nice role player at the college level, but its still questionable if hell be able to grow into a similar role in the NBA. Hell undoubtedly be invited to Portsmouth, where he will have a chance to prove he belongs, and could be invited to the NBA pre-draft camp as well. He has an outside chance of getting drafted, but most likely will have to prove himself in summer league and training camps to earn a guaranteed contract. Hell need to show he can consistently contribute something at an NBA level other than spot-up shooting to have a chance to stick around in the league.
Read full article