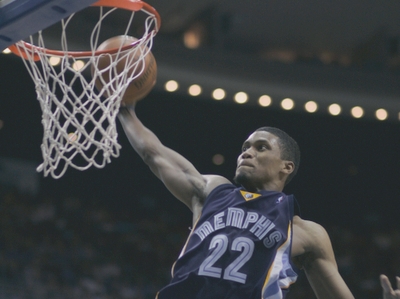 Matt Williams
@DraftExpress
In these reports, we take a look at the point guards moving into their fourth year in the NBA. As we found when we identified which players from the 2005 draft were still in the League, the trajectory of a player's career is often unpredictable, which is why we opted to wait until this group was transitioning out of their rookie contracts to gauge their progress.

Overview: One of the premier players from his draft class. A blossoming young star who took advantage of his opportunities on a bad team, but has some trouble with his consistency. Possesses an outstanding physical profile. Has excellent height, a 73 wingspan, and outstanding run-jump athleticism. A high-flyer. Was as perimeter oriented in his college career as he is now. Former McDonalds All-American won Big East Conference Rookie of the Year Award at UConn. Selected with the eighth pick by the Rockets, but was dealt to Memphis almost immediately. Had a solid rookie year, but blossomed as a perimeter scorer after the departure of Pau Gasol. Took a small step backwards in his third year, but teamed with O.J. Mayo, forms the foundation of Memphiss future. Still has opportunities to improve, particularly as a team player.

Offense: An explosive offensive player. Gets a quarter of his offense from each of isolations, spot ups, and a blend of fast breaks and post ups. Does most of his damage with his jumper. Possesses solid form and has improved his footwork dramatically over time. Gets great elevation and has a high release point. Prone to forcing some shots over defenders, especially off the bounce. Decent three point shooter, still has room to improve his consistency though. Takes a lot of pull up jumpers, using his quickness to get inside and his leaping ability to rise above traffic. Capable catch and shoot player who can knock down shots running off of screens and with a hand in his face. Athleticism is a blessing and curse since is makes him a threat to score one-on-one, but allows him to get some shots off that he probably shouldnt take. Can get to the rim driving in either direction and has no problem creating separation. Has improved his ball-handling since he entered the League, only augmenting his fantastic first step. On the turnover prone side, and doesnt make his teammates better. Brings little to nothing to the table as a passer, and needs to improve his ability to find the open man when he draws additional defenders. Doesnt get to the line at the rate his athleticism could warrant. Possesses outstanding tools, but still needs to refine his shot selection, pick and choose his spots off the dribble, take on contact, and see the floor better.

Defense: Not a great defender considering his tools, but has his moments when hes motivated. Has all the physical tools of a lockdown defender, but lacks the right mentality to get the job done. Able to come up with some steals thanks to his outstanding wingspan. Doesnt block many shots, get in a consistent stance, or show much initiate when recovering or closing out. Wingspan allows him to at least contest spot up jumpers when he closes out, but hes far from aggressive. Puts himself out of position when defending the ball, and lacks a degree of discipline when his man looks to penetrate. Rebounds the ball at a decent rate due to his athleticism. Needs to recognize that his defensive development will be integral to his success when he plays for a competitor.

Overview:Swiss wing with excellent versatility and a very smooth game. Has nice size for a wing and a long frame. Not powerfully built, but proves to be a very fluid player with solid overall athleticism. Does a lot of things well, but isnt a standout in any one area. A nice complementary player who can fill a number of roles. Supplements his all around offensive skills with excellent defensive ability. Emerged as a prospect while playing in France for Chalon before making the jump to Serie A where he was one of Biellas top players. Stood out overseas due to his versatility and athleticism and landed in the lottery. Came over to the NBA immediately and saw considerable playing time. Played well as a rookie with the Bulls, but is still working to improve his offensive efficiency. Traded to Oklahoma City, where his lack of ideal scoring ability isnt as problematic. A smart player with a good work ethic who is an improved jump shot away from been an excellent puzzle piece. Wont ever be a star, but is a solid roleplayer who could become even better. Well respected for the things he brings to the table, one of the few players in his draft class to receive an extension.

Offense: A versatile offensive player who lacks the jump shot to be ideally efficient. Very savvy player who gets more than a third of his touches in spot up situations, while using his athleticism in transition and his high basketball IQ to get open off of screens or cuts, scenarios that account for another third of his total touches. Able to score in a variety of situations, even getting touches in the post and running the pick and roll on occasion. Capable ball handler with nice quickness. Not flashy, but dribbles with a purpose and wont force the issue. Smart passer who displays good vision and decision-making. Does a good job running the floor in transition, and shows a good understanding of spacing. Capable of doing a lot of good things offensively, but isnt always aggressive enough to take advantage of that. Doesnt have much success shooting the ball in catch and shoot situations or off the dribble. Has some issues with the rhythm on his shot, will fadeaway from time to time, and doesnt always fully extend his follow through. Displays a quick release and uses his speed and a crafty spin move to create space for his shot in the midrange. Not a major threat from beyond the arc, struggling notably with a hand in his face when taking set shots. Proves extremely capable around the basket, primarily because he picks and chooses his spots extremely well when attacking the rim. Does the little things to make himself more productive, crashing the offensive glass well for a small forward, cutting backdoor, and giving his teammates an outlet when the dribble into traffic. Could be an outstanding offensive roleplayer if he improved his consistency from beyond the arc or became a bigger threat from the midrange.

Defense: A sound defender with excellent tools. Long arms, quick feet, and good discipline make him adept at getting in the passing lanes. Doesnt take too many risks, but still forces quite a few turnovers. Displays good awareness when defending off the ball. Shows good recovery speed and the ability to contest shots with his wingspan. Good option in one-on-one situations though more powerful players can cause problems for him. Rebounds the ball extremely well on the defensive end. Very smart defender who knows when to give space and when to take it away. Plays with intensity and fits the perimeter stopper role that every team likes to have.

Overview: 3-point shooting specialist who is slowly carving out a niche for himself in the NBA. Has good size for a player with his shooting ability, but lacks the quickness and explosiveness to make an impact in other areas on the NBA level. Possesses a poor wingspan as well. A noted marksman from the day he set foot on Marquettes campus. Improved his offensive versatility over his four collegiate seasons, but was drafted early in the second round for his ability to shoot the three. Played more games in his third year in the NBA than he did in his first two years combined. Has improved his efficiency from inside the arc while finding his stroke from deep. Not the most glamorous player, but a solid shooting specialist who would benefit from a few seasons in the same system. An opportunist who needs the right players around him to be effective and can help spread the floor. Not a good enough defender to see big minutes on most teams. High character individual.

Offense: As with most shooting specialists, Novak gets most of his offense in catch and shoot situations when spotting up. Over 70% of his field goal attempts come from beyond the arc. Gets an extremely low percentage of his attempts around the basket and is almost exclusively a jump shooter. Displays good form featuring a high, compact release and nice follow through. Works well off the ball, displaying the ability to hit jumpers running off of screens. Tends to fade away when shooting of the catch moving to his right, limiting his effectiveness a bit. Reasonably efficient shooting on the move, but significantly better when hes floating on the perimeter with his feet set. Doesnt put the ball on the floor very often. Highly one dimensional, but very good at what he does. Able to spread the floor for his teammates and requires attention on the outside. Solid passer who understands his role. Not a playmaker by any stretch of the imagination, but also almost never turns the ball over. Lights out from the foul line, although he only gets there once in a blue moon. Not a dynamic scorer, but provides a different dimension offensively with his range.

Defense: An active defender who lacks the tools to make much of an impact. Doesnt have the length, strength, lateral quickness or explosiveness to effectively defend the perimeter or the post. Tends to be targeted in the post where more athletic power forwards can take advantage of him. Doesnt display great recovery speed when trying to get back to his man after helping or closing out shooters. Lacks the leaping ability and quickness to make an impact on the glass and wont force any turnovers or block any shots. Will do his best to keep his man from gaining position on the block and gets in a stance out on the perimeter, but lacks the physical profile to be an average defender.
Read Next...