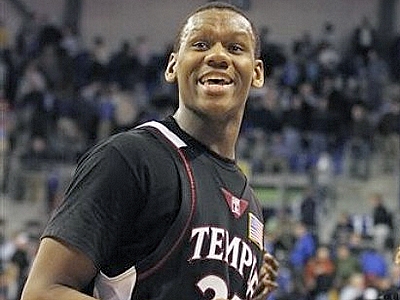 Kyle Nelson
@KNelsonDX
In Atlantic City, the Quarterfinals have ended and the semifinals are upon us. St. Bonaventure, Saint Louis, Dayton, and Massachusetts did not make the cut in what was a thrilling Friday afternoon, evening, and night. Now, only Temple, Rhode Island, Xavier, and Richmond remain to continue their quest for the Atlantic 10 Conference Tournament Championship.

The day began with Temples emphatic 69-51 victory over St. Bonaventure. Temple center Lavoy Allen dominated what was supposed to be an entertaining and revealing match up against Andrew Nicholson. By the numbers, it would seem that it was an even match up. After all, neither prospect scored a tremendous amount of points.

The reality, however, is that Allen dominated Nicholson, grabbing 15 rebounds in addition to 14 points. In the process, Allen showed his varied offensive repertoire, from drop stops to floaters, from put backs to jump hooks. Even more interesting, however, is the ease at which Allen looks for and finds his teammates. His passing opened up the floor today, allowing him to impact the game without scoring.

The question remains, however, if Allen is too unselfish and too passive, both significant criticisms throughout his career. Similarly, can Allen overcome his lack of ideal size and athleticism to contribute at the next level? These questions will have to wait until todays match up against Rhode Island in addition to future competition with NBA-caliber frontcourts.

One thing that was clear, however, was that Lavoy Allen significantly outplayed Andrew Nicholson. Nicholson shot a miserable 5/18 FG on his way to thirteen points and did not do a tremendous amount to convince scouts that he has what it takes to play a role at the next level. For one, he still does not rebound the basketball and though he grabbed seven yesterday, he did not box out on either end of the court, follow missed shots (including his own), and his overall effort did not stand out.

Similarly, his defense remained unimpressive, which certainly has something to do with his lack of strength, but has more to do with his lackadaisical attitude and lack of awareness on this end of the floor. St. Bonaventure does not play lockdown defense by any stretch of the imagination, but Nicholson failed to play any of Temples big men effectively.

On offense, Nicholson retreated to his spot-up jump shot far too often and, though he has proven that he can hit this shot in the past, yesterday he missed. Worst yet, he took his focus out of the post, where his quickness and mobility are particularly effective, for crucial stretches of the game.

When he finally went to the post, he showed improved, but still lacking, footwork and aggressiveness. If a player like Nicholson makes an NBA roster, there will not be many plays called for him, so he will be forced to do the small things if he wants an opportunity to play. Next season, he must focus on improving his overall effort and skill level so that he leaves no doubt that he belongs in the NBA. In the meantime, he has a lot to accomplish.

Elsewhere, Temple combo-guard Juan Fernandez continued to put on a shooting exhibition, showcasing his strengths and weaknesses in front of scouts. At 64, Fernandez has nice size, but his frame and athleticism are lacking. While he did a good job of knocking down shots and finding his teammates under the basket, he struggled against more athletic defenders and has yet to prove that he can guard his position in the NBA.

Michael Eric, Temples 611 center, also looked good, apart from his excellent size, frame, and solid athleticism. He scrapped for loose balls and got position under the basket, both ways for him to compensate for his less than stellar skill set, awareness, and basketball IQ. If he can continue to carry these improvements into next season, then he could be an intriguing prospect down the road.

The next game was a step in the wrong direction and what resulted was the closest the Quarterfinals got to a blowout. From a scouting perspective, there is little of note here.

Keith Cothran did little to distinguish himself in what is becoming a trend. The 64 shooting guard has a quick first step, but he is not particularly creative on the offensive end and made more of an impact by trash talking than by his scoring. This is a performance that Cothran will want to forget and luckily, he has another chance to prove himself. If history is any indication, however, then this is easier said than done.

Willie Reed, unfortunately, will not have another chance in the Atlantic 10 Tournament to perform better. He might have to wait until next year. The athletic 69 sophomore looked out of place against Rhode Islands versatile frontcourt and lacked even the most basic footwork to make much of an impact offensively. On the defensive end, his lack of bulk hurt him in the post and his average awareness did him no favors elsewhere. Towards the end of the game, he seemed to be more comfortable, but he is still very raw offensively and defensively, looking more and more like a four-year college prospect.

The most interesting prospect, which tells you something about the level of competition, was 67 combo-forward Lamonte Ulmer. Ulmer has the prototypical frame and athleticism for a modern NBA wing, but has the skill set of a face-up power forward and just an average basketball IQ. He is a senior, but if he continues to work on his shooting and ball handling while maintaining his defensive intensity, he might be worth a look in the future.

In what was by far the best game of the day, not to mention the roughest, fastest, and most brutal, Xavier rallied from a double-digit deficit to beat the struggling Dayton Flyers.

The key to victory was Terrell Holloway and his clutch free throw shooting, but Jordan Crawfords second-half return to form was just as important.

Interestingly enough, Jordan Crawford was a non-factor until the end of the game. Slowed by nagging pressure defense and stifling man-to-man, Crawford was instantly transformed from the primary ball handler and shot creator to a role player, a shift to which he did not respond particularly well. While he started the game forcing shots and making ill-advised drives to the hoop, he soon started looking for teammates and using his athleticism to attack the basket and draw fouls.

His lack of maturity and focus were also on full display last night, as well, bringing up further questions about his transition to the NBA. Tonight, he was one of Xaviers heroes, but he also showed the scouts in attendance that he has a long way to go on both sides of the ball before contributing at the next level.

Though Xaviers 69 center Jason Love is not very athletic or quick, he is always in the right place at the right time. He boxes out for rebounds, sets good screens, moves well without the ball, and shows improved footwork. He is a tough player, but also intelligent. While his lack of athleticism likely disqualifies him from an NBA roster spot, he should have no trouble finding a job this summer.

For Dayton, it was a particularly somber scene. After 30 minutes of brilliant coaching, the Fylers squandered a 15-point lead, culminating in a technical foul, a 6 point swing and a crushing defeat at the hands of a bitter rival.

Individually, it was bittersweet to see a team full of interesting players bow out so early. Small forward Chris Johnson only played 11 minutes before fouling out, unable to showcase his superb shooting stroke and explosiveness around the rim. Though hes just a sophomore and he will be back next year, it was a non-descript end to an otherwise much improved season.

Senior power guard Marcus Johnson also looked solid, locking down Jordan Crawford for stretches and using his freakish athleticism to attack the basket and to compensate for his developing skills. His shooting motion needs some serious work and his compact 63 frame does him few favors, but he is a quality player and should have a long professional career after he graduates this spring.

Most notably, however, last night marked 68 combo-forward Chris Wrights exit from the tournament. Wright struggled with his shot, but used his quick first step, strength, and athleticism to attack the basket, putting points on the board despite his sub par shooting night.

His aggressiveness and assertiveness with the ball in his hands were a welcome sight, even though his shooting mechanics, ball handling, and perimeter instincts still need significant work. It seems as though he is slowly but surely on his way towards transitioning into a wing or legitimate combo-forward at the next level. He will have to prove himself defensively despite his lack of ideal length, but his above average lateral quickness, size, and quick hands should help ease the transition.

At this point, Wrights future plans are unknown. When we asked him about his plans for this summer and for next year, he responded, Thats not something that Im worried about right now. Regardless, he showed the positive and negative aspects of his game and found a way to contribute regardless of whether or not his shot was falling.

Xavier advanced, all but ending Daytons NCAA Tournament hopes, and will meet Richmond this afternoon in the semifinals.

This game was ugly from the onset, rescued from obscurity by an inspired run by Massachusetts shooting guard Ricky Harris, likely the last run in his college career. Along with hot shooting from backcourt-mate Anthony Gurley, the Minutemen stormed back from a double-digit deficit before bowing out to Richmond, who will test their balanced attack against Xavier. As we mentioned before, be on the lookout for Richmond combo-guard Kevin Anderson and shooting guard David Gonzalvez, two players who should match up well against the Musketeers.