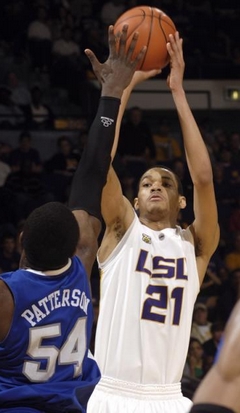 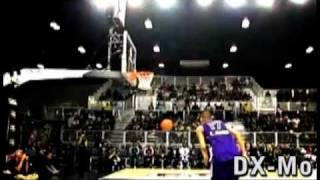 Joseph Treutlein
@DraftExpress
As you can read by following the link to his profile, we wrote extensively about LSUs 611, 190 pound power forward Chris Johnson at the end of last season. He is an interesting prospect in the deep and talented SEC because of his size, athleticism, and versatility, but he is still very much a developing player who has yet to reach his full potential. Last year, the 23 year old senior had the opportunity to play more minutes than ever in his career and responded with career highs of 11.6 ppg (52.5% FG, 30.6% 3FG, 85.2% FT), 6.6 rpg, and 2.6 bpg. This season, however, more progress is expected from Johnson, and if he wants to remain wants to remain relevant in the mind of NBA scouts, it will be essential that he delivers.

First, Johnson will have to improve some of his glaring weaknesses. While there is likely little hope of correcting his extremely slight frame, Johnson must work to show that he can man the post at least part-time at the collegiate level. He has shown promise with his footwork and very nice quickness and leaping ability in the paint, but his lack of bulk makes it extremely difficult for him to post up and keep his position. Lacking the lateral quickness to play on the perimeter at the next level, its going to be essential for Johnson to show improvements dealing with contact on the interior.

Similarly, Johnson is going to have to continue to work on his raw perimeter skills. His jump-shot, one of the principal weapons in his offensive arsenal is extremely hit or miss at this point. First and foremost, it is necessary for him to develop a consistent shooting motion. Then, he should work to remove excess motion, specifically kicking his legs out and falling away from the basket from his shot. Thanks to his length and his extremely high release point, his jump-shot could be incredibly difficult to defend if he can improve.

Last season, Johnson showed tantalizing offensive potential on occasions, sometimes creating his own shot from mid-range or other times driving to the basket from the perimeter and in transition. Though these are by no means staples in his offensive repertoire, he should look to continue to expand his offense next season and prove to scouts that he is not just another spot-up-shooting big man.

Defensively, Johnson will have to prove that he has a position. He had trouble staying in front of perimeter players, and in the post he lacked the strength to be very effective against back-to-the-basket big men.

The odds are somewhat against Johnson, as at the end of the day he is a 611, 190 pound face-up power forward with a developing skill-set that oftentimes does not involve post play. If he can prove, however, that he is still improving and should he have a good senior season, then there is a chance that somebody will give him a serious look on draft night.
Read full article

Joey Whelan
@DraftExpress
It has been a disappointing season for LSU, and the Tigers are simply playing out the stretch of the regular season at this point in the year. What has been promising though is the development and sudden appearance on the scene of junior Chris Johnson. After seeing limited time as a freshman and sophomore, Johnson was suddenly thrust into a starting role, where he has certainly had his troubles, but has shown flashes of tremendous talent and ability.

At 611 and just 190 pounds, Johnson has tremendous length, but is rail thin. While his enormous wingspan is a huge plus for him, he doesnt appear to have a frame that will allow or support much gain in weight. This lack of strength and ability to withstand much contact has hampered Johnson a tremendous amount in certain aspects of his game. His 5.5 rebounds per game for example is a very poor number for a player of his size and length. Johnson is capable of pulling in plenty of balls outside of his immediate area, but often he is muscled so far out of position by opponents that he simply cant make a play on the ball.

For a player listed at a frontcourt position, Johnson generally looks very uncomfortable in the post. Again, his slight build is a major factor in is lacking post game. Johnson cant hold his position on the block for more than a second or two, so often his post up opportunities are thwarted if teammates dont get him the ball quickly. When he has the ball, though, he shows some signs of having a drop step or dribble move to the middle, he has to go around defenders simply because he cant body them up or take much contact at all. As a result of his inability to play physical on the block, Johnson often resorts to a fade away jump shot down low, showing nice form and a consistent stroke, allowing him to finish the shot with a good amount of regularity.

When he is forced completely off the block and is given a little more room on the outside, Johnson likes the face up when he catches the ball with his back to the basket. Again, he shoots a solid percentage from the mid-range when he is able to get squared, although he shows some tendency to fade even when he has room for his shot. From this position, Johnson has also shown the ability to put the ball on the floor. While by no means is he a fantastic ball handler, the skills he displays for a player his size are fairly impressive. He can change direction when attacking the basket, and his first step is quick enough that he can on occasion beat some backcourt defenders off the dribble, and is certainly capable of taking most frontcourt players to the basket.

Johnson is at his most effective when he can spot up in the half court set. He likes to rotate to the weak side of the floor and set up on the perimeter, where he shoots just over 30%. While he isnt a lights out shooter from beyond the arc, if left open, he can do some damage on the outside. What is impressive though, is Johnsons ability to catch and shoot off of cuts. It is rare at the collegiate level to see a player of his size so fluid in their ability set up and fire. With that said though, Johnson does have a long, slow release that he needs space to get off, and he hasnt shown much ability to shoot off the dribble yet.

Like he does in the high post, Johnson will drive to the basket from time to time when he catches the ball out on the perimeter. While he isnt a tremendous leaper, he is a quick one, so he often catches defenders off guard with how fast he gets into the air; this also helps him a lot on the offensive glass. Johnson shows great body control for a player his size, often contorting his body around defenders in order to get himself a better look at the hoop. He shows surprisingly nice touch as well, so while his body may get tossed around due to its lack of bulk; Johnson is often still able to finish plays around the rim thanks to his finesse.

Defensively is where some questions start to arise with Johnson. While he shows some flashes of quickness on the offensive end, his lateral quickness is not good enough to guard most perimeter players at the college level, let alone in the NBA. While his size and length seem to make him a natural candidate to play the power forward spot, he doesnt have the strength to hold up as a post defender. He does come away with over two blocks per game, but this is typically against smaller opponents whom he is able to block on their way to the basket. It would be much harder for him to do this when being backed down by frontcourt players; in fact he rarely even defends the post because of his lack of bulk. Typically Johnson is left to cover taller perimeter players, but again he struggles when they take him off the dribble.

Another issue with Johnson is his basketball IQ and decision making abilities. He is one of the worst passing big men in the NCAA, and has one of the worst assist to turnover ratios in the nation. He also at times makes questionable decisions about when he should be handling the ball in the open floor and when he should defer to a guard. A lot of this may stem from the fact that prior to this season, he hadnt played very much at all.

Turning 23 this July, Johnson is old for his class, and despite his obvious shortcomings, he is a very intriguing prospect. He is a tremendous athlete, showing versatility, some quickness and great body control. He is an excellent shooter for a player of his size; in his first 13 games this season prior to missing time with a fractured hand, Johnson was connecting on 62% of his shots from the field. Despite a drop in his shooting percentage since the injury, he still has had some big games including an 8-15 performance against Tennessee and an 8-11 game against Florida. While his lack of a more solid frame may keep him from breaking into the NBA initially after his senior season, Johnson will certainly be an impact player in the SEC next year and will garner interest wherever he ends up landing. It will be interesting to see what kind of improvement he can make to his body this summer.
Read full article