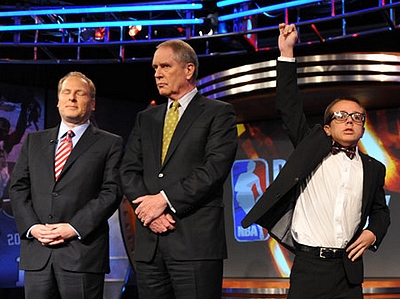 Jonathan Givony
@DraftExpress
With the order of the draft now set in stone, we take a look at the implications of the lottery drawing on each of the top 14 picks and what they might mean for the stock of various players in the draft. We also think about which players teams might consider at each individual draft slot.

Making the biggest jump in the lottery, from 8th to first with a pick that they acquired through a trade with, who else, the LA Clippers, this was a good night to be a Cavs fan.

The team will now likely be able to draft their point guard and hopefully franchise player of the future in Kyrie Irving, which gives their rebuilding process a massive shot in the arm.

The Cavs will surely play things close to the vest and give a good long hard look at Derrick Williams and any trade offers that are made, but even Minnesota Timberwolves GM David Kahn said in the lottery aftermath that he expects Cleveland to draft Kyrie Irving because they need a point guard.

As long as everything checks out OK long term with Irving's toe, it would a huge surprise to see Cleveland pass on him at #1.

There are a couple of different ways to look at this if you're a Timberwolves fan.

On one hand, things could have been much worse, as the team only moved down one spot instead of three, and is still in the top two in what is widely thought of as a two player draft. On the other hand, Williams plays the same position as their top two scorers, creating some serious overlap that will need to be resolved eventually. This adds further uncertainty to a team that is already in fluxin-between coaches and point guardsa situation that is far from ideal considering the team's record last season.

At this point, there are a lot of unanswered questions still left to explore. Their front office indicates to us that they'll be very active in trade discussions this summer.

This is where the draft really starts seemingly, as soon as the consensus top two picks are off the board. The discrepancy between the prospects perceived to be the 3rd and 10th best talents is about as small as we can remember in our eight years covering the draft, which will make for a busy and interesting lead-up on Utah's part as they try to sift through all their options and figure out what would be the most effective move to make here.

For now, we're going with Knight, as he fills a major need for the team in the backcourt, and can also play alongside incumbent point guard Devin Harris without any major problems. As the youngest player in the draft, he has plenty of upside to grow into, and shouldn't have any issue living in Salt Lake City based on what we've learned about him.

Vesely (who the team liked very much according to sources when they were slated to pick 6th), Walker and others will also likely get strong consideration.

With their point guard of the future in the fold, the Cavs can now move on to addressing one of their other many needs. Their frontcourt would be a good place to start. An athletic pick and roll finisher like Valanciunas would pair up very well with Kyrie Irving, but the likes of Kanter, Biyombo, Leonard and Vesely will also surely get long looks as the talent gap between any of these prospects is not huge. The Cavs will also likely field offers for this pick.

While the Raptors did fall two spots to the 3rd overall pick, they should still be able to come away with one of the coveted guard prospectsBrandon Knight or Kemba Walker, due to the fact that Cleveland and Minnesota surely will look in a different direction after picking Irving and Williams 1-2.

Drafting a floor general is surely the next step in Toronto's rebuilding process, especially when evaluating the alternatives that are on the board. When it's all said and done, Toronto may end up with the same player at #5 that they would have taken at #3, just at a lower slot on the rookie salary scale.

The Wizards have to be disappointed by falling two spots to 6th overall, but still have a comparable group of prospects to choose from at this point. Vesely and Leonard would give them more athleticism and toughness on the wing, while Biyombo and Kanter would be frontcourt upgrades. Surely the team will go through an extended evaluation process before making their final decision, but Vesely is rumored to be the early favorite.

Sacramento's fall from five to seven is a bit more painful considering it likely takes them out of the mix for upgrading their backcourt situation, which clearly seems to be their biggest need at the moment. There are still some solid frontcourt prospects available, though, particularly Biyombo, who seems like a perfect fit alongside DeMarcus Cousins, where his offensive limitations wouldn't look quite as glaring.

The Pistons have plenty of needs, and it's doubtful whether they'll be able to solve them all in one night. Not in this draft class, and not after sliding down one spot to the #8 pick. There are question marks about whether Rodney Stuckey is their point guard of the future, better suited at the 2, or would even be most effective coming off the bench. Rip Hamilton and Tayshaun Prince may not be here long term. And while the team has invested a great deal of money in power forwards Charlie Villanueva and Jason Maxiell, the position is anything but fortified judging by the results of last season.

At this point, the team may have to take a long look at Enes Kanter, even if it may be difficult to play him together with starting center Greg Monroe, whose heavy feet make him ill-suited to guard perimeter oriented power forwards. Kanter is a poor match in Utah, Toronto and Sacramento with their current starting centers, and is scaring off already-skeptical teams with his unwillingness to work out competitively for any team. Nevertheless, NBA teams need size and toughness inside the paint, and the Pistons were too weak of a team, in too weak of a draft to pick solely on need.

Trying to plug holes over the last few years by putting on band aids on gaping wounds, the Bobcats are in one of the least desirable positions of any team in the NBA considering their roster makeup and cap situation. The team has few assets, many needs and looks far away from competing for anything more than a first round playoff exit in the absolute best case scenario.

The #9 pick therefore isn't going to change the franchise's fortunes in a single night, but there will be an opportunity to add a player who can hopefully develop into a building block moving forward.

Power forward looks like a good place to start, and the team should be able to provide Donatas Motiejunas the minutes and touches needed to develop into an asset down the road. His skill-level and overall polish will allow him to put up major numbers right off the bat, and should ease the scoring load on Stephen Jackson and D.J. Augustin playing both the 4 and the 5 spots.

Small forward is another spot where the team has a major hole, which could very well make Kawhi Leonard an attractive option. He's no Gerald Wallace, at least not immediately, but his rebounding, toughness and work ethic could be useful even if his offensive limitations are not ideal considering Charlotte's struggles in that area last season.

The Bucks ranked as the worst offensive team in the NBA last season, which makes it very natural for them to look at Marcus Morris arguably the most skilled collegiate big men in this draft. Morris comes in ready to play right away, and will fit in very well with the mentality demanded by head coach Scott Skiles. He can space the floor for Brandon Jennings and Andrew Bogut, and score inside the paint with his highly developed post-up game. Him and Luc Richard Mbah a Moute would make an intriguing combination at the 3 and 4 spots, as they seem to complement each other quite well.

Golden State needs toughness and rebounding in a major way, and trotted out a host of extremely limited small forwards defensively last season. Kawhi Leonard would give them an upgrade in all those categories, even if he'll have to improve his perimeter shooting stroke substantially to get playing time alongside the Warriors' ball-dominant guards.

The Jazz have very little depth on the wing and Alec Burks will give them an immediate upgrade athletically with his smooth ball-handling skills and overall shot-creating ability. He would be a good fit next to projected #3 pick Brandon Knight, as the two can share playmaking responsibilities and have strengths and weaknesses that match up well.

The Suns are in a tricky spot  not quite rebuilding but clearly in transition and obviously have a big need at the power forward spot in terms of toughness and rebounding. Morris is the best of both worlds, as he's a good fit with their current roster, and has upside to continue to develop down the road. He's able to play the 4 in bigger lineups or the 5 in small lineups and can space the floor for Steve Nash and Aaron Brooks the way their system demands.

The Rockets started Shane Battier for much of the year at small forward, and then traded him at the deadline for Hasheem Thabeet. The team seems to have just one 3 on their roster at the moment in Chase Budinger, and no combo forward who can match up with the face-up 4s we see quite a bit out west. Harris has considerable upside at just 18 years old and will be able to fit in culturally right away into the team's locker room. He's smart enough to internalize everything that's thrown at him, and has one of the better work ethics of any player in this draft.
Read Next...