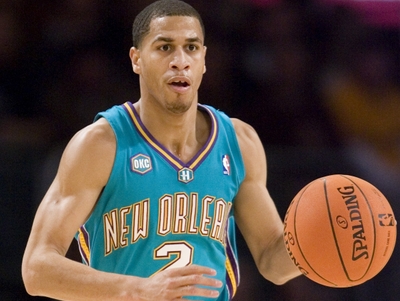 Jonathan Givony
@DraftExpress
We take a look through our soon to be released Overseas Free Agent rankings through a variety of parameters, analyzing the players who have been added and removed from the list with a scouting eye's look at those who moved up or down the most.

Europe was all the rage last summer, as high profile signings like Josh Childress, Jannero Pargo and Earl Boykins made many around the NBA wonder whether the overseas market would soon become a major factor in free agency.

This was more than just a bunch of European players like Bostjan Nachbar, Nenad Krstic and Juan Carlos Navarro packing their bags and heading back home-- European franchises were now competing with NBA teams for coveted role-players in their prime.

All of a sudden Kobe Bryant and LeBron James were fielding questions in press conferences about the possibility that they might consider crossing the ocean as well, with those savvy superstars doing very little to discourage that notion.

Alas, the collapse of the global economy quickly brought everyone back down to earth, as those that decided to sign in Russia (Pargo, Nachbar, Krstic, etc) appeared to get burned badly as their teams could no longer afford their contracts. Thus, a number of major players in the (already limited) luxury free agent market were taken out of the mix.

With Dynamo Moscow near bankruptcy and Russian powerhouses CSKA and Khimki having slashed their budget substantially, only a handful of teams capable of spending 7-figures on players still exist. Most of them (with the exception of Olympiacos) seem to prefer signing proven veterans who have played in Europe rather than rolling the dice on a Von Wafer type--an experiment that already seems to have backfired on the Greek team that signed him.

Many of those that left last summer are now back in the NBA, which creates the first category we'll look at, players who were on our Overseas Free Agent rankings list in 2009 who are now being removed.

The number you'll see next to the player's name is his ranking from last year on the overseas free agent list.

Part One: Made the NBA:

As documented on this site already, Pargo took the big money overseas after failing to receive the type of offers he expected from the NBA in the summer of 2008, but wasnt able to fully show his potential at the European level due to a combination of injuries and financial difficulties on the part of the team he played for in Russia.

Despite the setbacks, he still describes his overseas experience as being a positive one, at least in conversations with us. He quickly found a 1.99 million dollar contract in his hometown of Chicago this summer, struggling somewhat with nagging injuries early this season, but is still the same microwave scorer off the bench.

Haislip didnt appear to be in the biggest rush to return to the NBA when we sat down to speak with him at the Copa del Rey in Spain last February, but he nonetheless finds himself on San Antonios roster right now. He signed a two year contract for 1.77 million dollars, with the second year being non-guaranteed until July 1st, 2010.

Not only did Haislip take a massive pay cut to come back to the NBAhe could be making far more than the veteran minimum in Europebut he really hasnt enjoyed much playing time to justify his sacrifice. Hes seen a grand total of four minutes in the entire season thus far.

As weve discussed numerous times when profiling his strengths and weakness, Haislip was always going to be a poor fit on a team (like the Spurs) that put such a large emphasis on defense and rebounding (his two biggest shortcomings) from their role-playing big men.

The fact that San Antonio may be the deepest team in the NBA at his position (Antonio McDyess, DeJuan Blair and Matt Bonner are all outstanding options, besides Tim Duncan) obviously doesnt help matters much. On a different team that values his scoring, athleticism and shot-creating ability more, Haislip would probably be in much better shape.

Right now its still too early to gauge whether Haislip made a mistake in passing up a much larger guaranteed contract in Europe in the prime of his career for the sake of warming San Antonios bench. Its not looking good so far, though.

Despite the gaudy stats, Arroyos European adventure was mostly a bust, as it was clear that Maccabi Tel Aviv couldnt replace him quick enough (with Andrew Wisniewski) this summer. Arroyo, a proven NBA backup point guard with seven years of experience underneath his belt, ended up signing a non-guaranteed deal with Miamiclearly a sign of how desolate the market was at the time. Things seemed to have worked out well for him, though, as hes seeing over 15 minutes per game and is performing fairly well thus far.

The 7-2 Slovenian center didnt have the type of year many expected from him alongside Brandon Jennings in Lottomatica Roma, although much of that had to do with the limited playing time he saw next to Andre Hutson. He averaged under 19 minutes per game in both the Euroleague and Italian league, looking somewhat frustrated along the way, but that didnt stop Philadelphia from offering him a guaranteed contract for the veteran minimum (1.1 million dollars) this summer. Not surprisingly, he hasnt done much for them. Were there better candidates out there considering their rebuilding status? Possibly.

The 5-5 point guard signed a massive contract with Virtus Bologna last summer for over 3 million dollars, and for the most part did a pretty good job for them, even if there were obviously some growing pains along the way. He still wasnt able to help the team get out of the quarterfinals of the playoffs, though.

With the 7-figure contract European market drying up quickly this summer, Boykins was left with offers that paled in comparison with the deal he had just finished, forcing him to sit and wait for something better to open up. A rash of injuries in Washington in mid-November did exactly that, and Boykins has been playing 20 minutes per game on a minimum contract since.

Non-Free Agents who moved from Europe to the NBA

-Carlos Delfino- Rights were owned by the Toronto Raptors, who signed and traded him to the Milwaukee Bucks.

-Ersan Ilyasova- Rights were owned by Milwaukee, signed by Bucks for three years. Looking like a major steal for them so far.

-David Andersen- Rights were owned by Atlanta. Traded to Houston for a 2nd round pick and cash. Also looking like a very good acquisition thus far.

-Serge Ibaka- Drafted by Oklahoma City in 2008. Played the 2008/2009 season for Manresa in the ACB, and signed by the Thunder this summer after an excellent summer league campaign. Obviously a project, but shows huge potential to develop down the road.
Read Next...