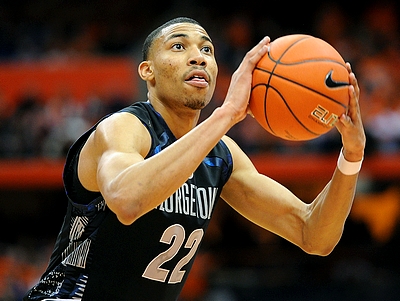 -As has been the case in recent years with top prospects at the small forward position, who often provide a number of layers of value on both ends the floor aside from their scoring, Otto Porter looks good but not great on paper.

Ranking just above the sample average in usage, Otto Porter's 14.7 possessions isn't terribly impressive, but his 1.06 points per-possession overall ranks fourth in this group, and his free throw rate of 18.5% is good for second. He used 87.3% of his possessions in the half court, the second highest percentage of any small forward prospect. Getting out in transition on a well below average 12.7% of his possessions playing for a very slow-paced Georgetown squad, he scored 1.45 points per-possession and got to the line almost 30% of the time on the break, leading this group in both categories, making you wonder how he'd fare on a team that was more committed to getting out in transition.

Seeing just 20% of his offense creating his own shot on the pick and roll, isolation situations, and post-ups, Porter's profile reflects the work he did in Georgetown's Princeton-style motion offense. Cuts alone account for roughly the same percentage of his total possessions as opportunities to create his own shot. A slightly below average finisher converting 1.13 points per-shot as a sophomore, Porter scored a tremendous 1.393 points per-shot as a freshman in an even more compact role. In contrast to his decline around the rim, Porter made progress as a set shooter this year, knocking down a top-three 42.3% of his catch and shoot jumpers, a significant jump from the 37.4% he made a year ago.

Porter's main weakness on paper aside from his lack of prolific isolation and pick and roll usage, is his pull up jump shot. Making just 25.6% of his 1.3 attempts per-game, it will be worth monitoring whether he can improve as a scorer off the dribble and recapture his efficiency around the rim. Lauded for his ability to help a team as a high-level complementary player, Porter's improved shooting and savvy off-ball movement certainly seem to support claims that he'll fit in on whatever roster he's drafted onto without constantly needing the ball in his hands.

-This exercise doesn't paint Shabazz Muhammad in a positive light. Although it is impressive for any freshman to use 18.5 possessions per-game, Muhammad's 0.953 overall points per-possession doesn't stand out among his peer group, ranking fourth last.

Muhammad's role is what sets him apart on paper, as his play-type distribution is truly unique. Using 4.8 possessions per-game in transition, more than any other SF, Muhammad was extremely opportunistic on the break, but he scored just 0.98 points per-possession there, the second worst mark in our sample. His usage on put backs and running off screens are also extremely high relative to the sample averages, as his 2.4 and 3.5 possessions per-game in those situations are both top-two marks, but again, his efficiency in actually converting there leaves a lot to be desired. By comparison, he used an exceedingly low 1.1 combined possessions per-game on isolations and pick and rolls, offering a look into how little he was asked to create off the dribble in Ben Howland's offense.

A below average 22.6% jump shooter off the dribble but respectable 40% jump shooter off the catch, Muhammad did his best work with his feet set in spot-up situations, which accounted for his 12.5% of his offense, the lowest of any small forward prospect this season. One of the biggest enigmas in this draft, Shabazz Muhammad was prolific, but less than efficient, in a large, abnormal role.


-
Russian prospect Sergey Karasev, like point guard Dennis Schroeder, continues the unusual pattern of 2013 international prospects not looking at all out of place among their NCAA peers. His 15.2 possessions per-game usage ranks above the norm, while his 0.99 points per-possession is exactly average.

Playing against some of the top teams in Europe in the VTB United league and EuroCup, Karasev led Triumph in scoring many nights, and while his efficiency in any single playtype does not stand out, his extensive usage is a reminder that he was a go-to scorer in some of the top Leagues outside of the NBA at the tender age of 19, which is incredibly rare.

Knocking down just 31.1% of his jump shots last season, Karasev's numbers seems to belie his shooting ability, as he regularly impressed scouts with his range and consistency over the course of the week at the Nike Hoop Summit, but struggled to find consistency through much of the season.

-
Dario Saric has already withdrawn from the draft, which might be a good thing considering he ranked as the least efficient shooter and overall scorer, and most turnover prone player in this group. His 0.84 PPP and 22% turnover rate are a bit misleading though, as he struggled mightily when he first returned to action in the Adriatic League before looking more comfortable and settling in nicely in the far weaker Croatian League later on. It will be interesting to see how much he can improve in various areas next season.

-Glen Rice ranks second-last in usage among this group at 12.2 possessions per-game, but impresses with his third-ranked 1.07 points per-possessions playing in the NBADL.

Though Rice ranks second last in the number of possessions that he used on the half court at 9.2 possessions per-game, his 45.6% shooting outside of transition ranks first among all small forward prospects. An average jump shooter in this study at .99 PPP (although shooting from the NBA 3-point line), Rice doesn't force midrange jump shots, attempting just 0.4 per-game, which helps him rank a cut above the rest of the field in efficiency given he shoots 59.1% at the rim and 36.2% on his catch and shoot jump shots.

-Reggie Bullock's roleplayer potential is absolutely clear on paper. He gets to the rim for a bottom-3 1.9 shots per-game, but his 1.29 points per-shot on catch and shoot jumpers ranks first in this group and drives him to the head of the pack in overall scoring efficiency with his 1.11 PPP overall. On top of his jump shot, Bullock scores a top-5 ranked 1.37 points per-possession in transition and a sample leading 1.36 points per-shot as a finisher in the half court. He operates one-on-one less than any player in this group at just 0.4 times per-game and made just 21% of his pull-up jumpers, but his ability to spread the floor, make open shots, and be opportunistic finding easy baskets jumps off the page immediately.

-Tony Snell doesn't stand out much on paper aside from his second ranked 40.1% shooting on jump shots of all types of the perimeter. Only getting to the rim for 1.6 attempts as a finisher per-game, Snell's value, like Bullock, is in his ability to spread the floor.

-Ohio State forward Deshaun Thomas ranks as the highest usage player in this group and scored a top-five ranked 1.02 points per-possession. Thomas turns the ball over on an incredibly low 7.7% of his possessions and scores in a variety of ways, shooting 47% on a sample leading 2.6 possessions per-game in the post, a second ranked 64.2% as a finisher, and a slightly below average 32.8% away from the basket as a jump shooter. Questions remain about Thomas's ability to defend the three at the NBA level, but he was one of the most prolific, efficient volume scorers in the country last seasons.

-Carrick Felix leads this group in transition field goal percentage, converting on the break at a 69.4% clip. He's an average jump shooter and finisher, but his athleticism works in his favor in the open floor.
Read Next...