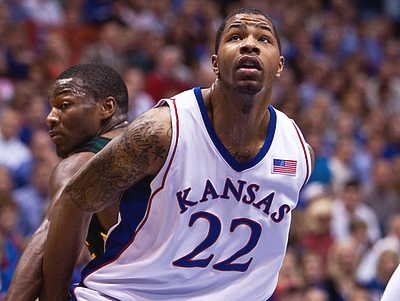 One of the most polished big men in all of college basketball, Marcus Morris took somewhat of a back seat to Cole Aldrich, Sherron Collins and Xavier Henry last year, but looks like a prime candidate for a breakout season in 2010-2011.

Showing nice tools for the power forward position, including solid height, a strong frame, and good, but not great athleticism, Morris' production stems mainly from his unique versatility and extremely high skill-level.

While not looking terribly explosive on first glance, he's an incredibly fluid and coordinated athlete who can do a little bit of everything on the basketball court.

Offensively, Morris displays an almost complete game, being capable of scoring effectively and efficiently both on the perimeter and in the post, along with the aggressiveness needed to take advantage of his skill-set, always looking to make his presence felt when given the opportunity to do so. He shot an outstanding 59% inside the arc last season, and an intriguing 37.5% from 3-point range.

Despite attempting just 32 3-pointers last season, Morris is clearly a very capable shooter with his feet set, the type of player who opposing defenses need to respect, which helps create great spacing for his teammates to benefit from.

Very much a threat to do damage from the perimeter with the ball in his hands as well, Morris has an excellent first step and the ability to penetrate driving either left or right, which puts plenty of pressure on the defense.

If the paint appears overly congested, Morris shows the unique ability for a power forward to stop and pull-up for a smooth off the dribble jumper, or even change directions and maneuver his way stealthy around opponents, thanks to his polished footwork and excellent ball-handling skills.

As Morris matures and continues to improve his skill-level even further over the next few years, he will develop into quite a shot-creating mismatch threat at the power forward position, particularly in one on one situations.

Not one to be content just hanging around the perimeter, the biggest share of Morris' offense actually comes in the post, where his aggressive nature, terrific touch (particularly using the glass) and smooth footwork come in extremely handy at the college level.

A very good finisher around the basket for these exact reasons, there are some question marks regarding whether Morris' average leaping ability will make it difficult for him to score at quite the same rate around the rim in the NBA.

Quite a versatile offensive player as noted, Morris gets production by running the floor extremely well, crashing the offensive glass and finishing around the basket, looking very aggressive and opportunistic with his scoring attempts, which he clearly needed to be with players like Collins, Henry and Aldrich playing alongside him.

Defensively, Morris does not have the height, length or explosiveness to act as a real game changing presence in the paint, but he still puts a very good effort in and sees excellent results at the college level for that reason.

His lateral quickness and excellent fluidity give Bill Self the ability to switch on the pick and roll, where Morris does a good job moving his feet and staying in front of smaller players, something that gives Kansas a big advantage in the half-court.

As a rebounder, Morris' production was just average last season, particularly on the defensive end. It's not quite clear how much playing alongside a terrific rebounder in Cole Aldrich had to do with that, which is something to keep an eye on this season.

Morris received little to no attention last year from most NBA draft outlets, but there's a good chance that will change as soon as this season kicks off. His performance at the adidas Nations Experience in August was truly eye opening. Rarely do you find prospects who are as skilled and versatile standing 6-foot 9, and considering that he's only going into his junior season, there's no reason why he can't continue to improve down the road.


Having profiled Burks fairly late in the season with a comprehensive scouting report, we've elected to wait and see what type of progress he's made with a fresh perspective in a few months, rather than rehashing many of the same comments made last year based off his 2009-2010 game footage.

While Judge still has some apparent gaps and weaknesses in his game, he's a fantastic athlete and plays with energy two things that make him intriguing from a long-term NBA perspective. With a few more years to hone his game and become more well-rounded offensively, he is a player we'll inevitably evaluate again down the road.


Having profiled Hamilton fairly late in the season with a comprehensive scouting report, we've elected to wait and see what type of progress he's made with a fresh perspective in a few months, rather than rehashing many of the same comments made last year based off his 2009-2010 game footage.

A former top-30 high school recruit with ideal physical attributes and a world of talent at his disposal, Freshman Elijah Johnson showed flashes of phenomenal potential in the very limited opportunities he had last season, playing just 6.6 minutes per game. The third string point guard for Kansas behind Sherron Collins and Tyshawn Taylor, Johnson will surely be contributing significantly more sooner rather than later.

Johnson has nice size for the point guard position at around 6-2, to go along with an excellent frame and excellent athleticism. He is very fast in the open court, and shows great potential with his ability to convert around the basket, not being afraid to use his strong body to bully his way to the rim and finish aggressively amongst the trees.

Johnson's perimeter shooting ability also looks promising, as he has a very nice looking stroke with fundamentally sound mechanics and an excellent follow through. He looks like a very capable threat with his feet set, but appears to have some work to do with his ability to shoot off the dribble.

Defensively, Johnson has excellent tools with his size, length, frame and lateral quickness, but appeared to be lacking somewhat in the experience and fundamentals department in the very little we were able to see from the minutes he was on the court.

As a point guard, Johnson appears to have good playmaking instincts, as he did not seem to have too many issues running Kansas' half-court offense in his limited time on the court last season, and posted a strong 7.4 assists per-40 minutes in a very small sample size of 151 minutes. Regardless, he shows very nice court vision of film and excellent anticipation skills at times, being able to not only make the simple pass but also surprising you at times with the swagger to go out and improvise on the fly with some extremely creative assists.

Clearly lacking experience as all freshmen point guards do, Johnson looks like an improvable ball-handler who still has plenty of work to do on his advanced shot-creating ability and pick and roll skills. Cutting down on unforced errors and continuing to improve on his mid-range game will be important for him moving forward.

With that said, the flashes of potential that Johnson dropped last season were hard to ignore, and when bunched together lead you to believe that he could be on his way to a breakout year as a sophomore. He was criticized at the high school level for being somewhat of an underachiever at times and not always playing up to his potential, so it will be interesting to see how that manifests itself in a larger role this season.
Read Next...