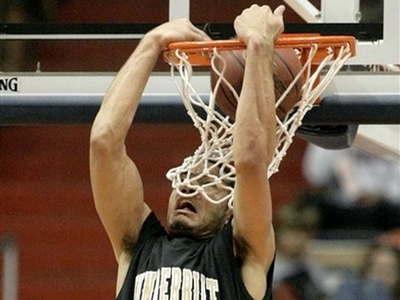 As a reminder, incoming freshmen have been excluded from this series.

One of the most pleasant surprises in last seasons mediocre SEC was the emergence of Vanderbilt freshman Jeff Taylor. An under the radar high school recruit, largely due to his non-traditional background going to high school in New Mexico, by way of Sweden, Taylor regardless managed to emerge as Vanderbilts most important player for big stretches of the season, being named to the All-SEC Freshman team for his efforts.

Taylor has prototypical physical tools for a high-caliber NBA wing player, starting with great size at 6-7, a frame that should have no problem putting on weight, and a good wingspan. He is an absolutely electrifying athlete on top of that, regularly playing well above the rim thanks to his tremendous leaping ability, and also possessing a very quick first step. His NBA upside is significant for these reasons alone, but he has some legit talent, as evidenced by the defense he played and the 18.4 points he averaged per-40 minutes pace adjusted in his first season of college basketball.

Offensively, Taylor is clearly at his best in the open floor, where his athleticism really shines through. Hes nowhere near as effective in the half-court at this point, though, as hes an average ball-handler and a fairly mediocre shooter.

Taylor can beat his man off the dribble quite effectively thanks to his excellent first step and long strides, but he struggles to create his own shot at times since he lacks advanced ball-handling moves and struggles to operate with his left hand or change directions with the ball. He is a very fluid player, though, with nice footwork and some very interesting spin-moves in his arsenal, so it may only be a matter of time until he becomes a high-level shot-creator. As it is, he is a pretty solid mismatch threat already at the collegiate level.

Spending heavy minutes at the power forward position, a sizable amount of Taylors offense is created by others, especially in Vanderbilts Princeton offense, which stresses a great deal of off the ball movement. His terrific size, quickness and leaping ability make him an ideal candidate to run backdoor cuts for, a play that gets him plenty of great looks around the basket. He doesnt show any type of post-up game (a shame considering his tools), but is a fairly good passer, even if that is negated somewhat by his high turnover averages. Taylor gets to the free throw line at an excellent rate, nearly 7-times per-40 minutes pace adjusted, although he could stand to improve somewhat on his 69% shooting from the charity stripe.

As a shooter is where Taylor needs to improve the most to reach his extremely high ceiling. He made just 9 of 41 3-point attempts last season (22%), mostly of the spot-up variety. Taylor sports a slow, deliberate release, not looking all that confident hoisting up shots past 17-18 feet, and seeing streaky results even from that range. He actually has decent shooting mechanics, and is smart enough to know to step into the mid-range area if he has time to get his shot off, but will have to improve considerably in this area if hes to make the transition to playing out on the wing full-time. He has almost zero ability to pull-up off the dribble at this point as well, not getting much elevation on his jumper.

Defense might be Taylors biggest selling point as a prospect, and probably will continue to be his calling card in the NBA. He has outstanding tools to get the job done on this end of the floor, and hes both willing and able to use them to the benefit of his team. Taylor gets low on every possession in an intense fundamental stance, moving his feet extremely well and absolutely smothering smaller opponents with his size, length and outstanding lateral quickness. He is almost always assigned to defend the opposing teams best player, and is a great weapon to have against the pick and roll since he can switch on anyone from the 1-4 positions. Taylor is also a phenomenal rebounder (particularly offensively) for his position, pulling down nearly 10 rebounds per-40 minutes pace adjusted. This is a testament to his physical tools, but also his excellent activity level.

Despite the fact that hes getting almost no exposure whatsoever from the national media, Taylor appears to be on the verge of a breakout season that will put him firmly on the radar of NBA talent evaluators, and likely in a major way. Considering that he owns a European Union passport (he was born in Sweden and already played for their national team) he will likely be pursued heavily by some of the top teams in Europe next summer if he decides to pass up declaring for the draft, but surely has the NBA in his future if hes willing to be patient. At this point hes just starting to scratch the surface on his true potential.

Having profiled Patterson at the conclusion of last season, we will wait until the season kicks off to revisit his scouting report.

Having profiled White in depth this summer at the USA Basketball Tryouts, we will wait until the season kicks off to revisit his scouting report.

Though Alabama went through a difficult transition last year and experienced a painful rebuilding season, JaMychal Greens performance is reason enough to think that next season will be better. The freshman big man showed a versatile skill set, with plenty of potential to improve in the future. Next season is integral to Greens draft hopes, as he must show scouts that he is more consistent on both ends of the floor, and able to lead a young Alabama team back to respectability.

Standing somewhere between 68 and 69, Green has decent, though certainly not ideal, size for an NBA power forward. He could stand to slim down and continue to get stronger, but he has a very solid frame, which, along with his athleticism, gives him a huge advantage at the collegiate level while not being quite as skilled as some of his peers. He plays above the rim at the collegiate level and has nice quickness in the post as well as in the open floor.

Green is still quite raw on the offensive end, though he shows the potential to develop into an effective post scorer. For one, he has a very soft touch around the basket, which oftentimes goes unnoticed because of his poor footwork and ball handling abilities. He does not really have a go-to move in the post. When he catches the ball on the block, he usually resorts to an awkward looking jump hook. It seems as though post-scoring instincts are just not there yet, as he often looks somewhat confused about what to do next when he catches the ball in the post. Similarly, he has to learn how to catch the ball and go straight up to the basket, instead of bringing the ball down first, which allows defenses to get set around him.

Another problem is that he does not look for his teammates on the perimeter and sometimes tries to get through two and three defenders, which oftentimes results in a turnover, a foul, or both. He commited nearly three turnovers for every assist he garnered last year, which is not a good rate at all. Confidence is the key for Green, but so too is becoming more assertive and aggressive in the paint while making and committing to good decisions with the ball in his hands. Improving in this area is essential if he wants to not only emerge as a dominant scorer in the SEC, but also find a niche in the NBA.

Green does two things very well on offense, however. He was a surprisingly adept spot-up shooter, with range extending to just inside of the collegiate three-point line. While his shooting motion is a bit compressed and still very deliberate, he shoots with a very high arc and an extremely soft touch. According to Synergy Sports Technologys quantified report, Green made 72% of his uncontested spot-up jump shots, an outstanding percentage for a big man, even if clearly the sample size leaves something to be desired. When contested, however, his percentages fell to 28%, which makes sense considering how much his form deteriorated with a hand in his face. While he does not have much of a mid-range game to speak of, Green did show some flashes of developing a passable face-up game, occasionally utilizing a pump fake on the perimeter and taking his man off of the dribble to the basket. His poor ball handling ability, however, stunts him tremendously in this area. Consistency is the key, and scouts will be watching to see if Green can incorporate these flashes into his offensive repertoire.

Green also attacks the offensive boards very well. He finished last season as the fifth best offensive rebounder per 40 minutes pace adjusted of all collegiate prospects in our database, averaging 5.2 offensive rebounds per game. After grabbing the rebound, Green usually found a way to put the ball into the basket, either in the form of an emphatic dunk or a layup. He has great hands, which combined with his athleticism, wingspan, and strength, really help him on the boards. He is a very good positional rebounder at this stage, but if he boxed his man out more often, he could develop into an even better rebounding presence at the collegiate level.

On the defensive end, Green shows a lot of potential to develop into a solid presence in the near future. While his ability to move his feet on the perimeter leaves much to be desired, he moves very quickly in the post and does a good job of staying with his man and on the ball in one-on-one situations. He has good timing in the post, as well, which allows him to be a good shot blocker at the collegiate level, though he finds himself out of position sometimes as a result. Maintaining his focus next year is essential and he must prove to scouts that he can defend at the next level.

JaMychal Green has the opportunity to develop into a legitimate NBA prospect next season if he can improve considerably upon his freshman campaign. His combination of athleticism, rebounding ability, and shooting touch are all skills that are coveted at the next level. The problem (for now) is that he has not put it all together yet and is nowhere close to being as consistent as he must be if he wants to play at the next level. Alabama enters next season firmly planted under the radar with a new coach and a young roster. He looks to be a couple years away from the NBA, but if Green can emerge as a legitimate star in the SEC, then scouts will surely take better notice.

Having profiled Hopson at the conclusion of last season, we will wait until the season kicks off to revisit his scouting report.
Read Next...