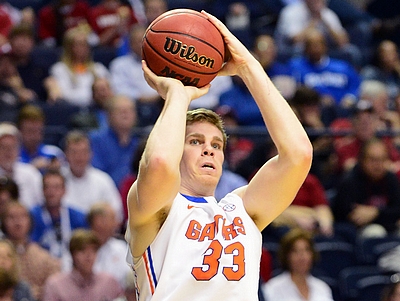 Joseph Treutlein
@DraftExpress
Erik Murphy is arguably the top-shooting big man in this draft, but his deficiencies as a defender and rebounder have given some scouts room for pause. How does he stack up in this year's draft class? 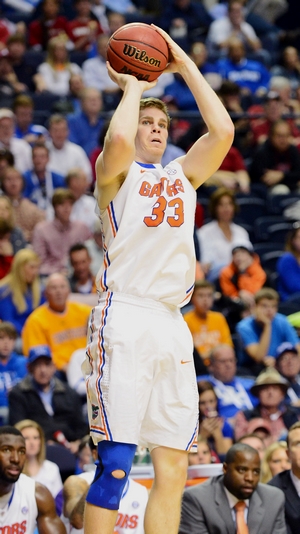 From a physical standpoint, Murphy has undergone one of the more noteworthy transformations you'll see from college players, adding a significant amount of upper and lower body mass to his frame, and looking like a radically different player from the one who set foot on campus in Gainesville four years ago.

Murphy's added size and strength has helped him do a better job establishing post position and battling with the opposition inside on both ends of the floor, though it hasn't been without negative side effects. While Murphy remains a relatively agile player for a big man, he definitely seems to have lost some of his fluidity over the years, not being able to change directions as well, looking a little more awkward in his movements, and often finding himself falling to the floor following lay-up attempts on offense or closeouts on defense. Given how sizeable a transformation he's made in such a short time period, he probably hasn't yet found the ideal combination of size and speed for his body, but he's clearly shown the work ethic and drive to maximize his physical abilities, and likely will continue to do so going forward.

On the offensive end, Murphy's undergone a similar transformation over the years with his role in Florida's offense, evolving from a garbage-man type inside player in his first two seasons to much more of an outside shooting specialist the past two years. Exactly half of his 8.8 field-goal attempts per game come from behind the three-point arc, and he shot a very impressive 45.3% on threes as a senior, a number that's increased each of the past three seasons. He does a good job playing within his team's offense to get open for spot-up shots and pick-and-pop attempts, and his combination of size, length, and shooting form give him a release point that makes it easy to get off shots.


The rest of Murphy's offensive game has diminished over his time at Florida, though he still has a competent post game that worked well against the competition he faced in the NCAA. As his body has changed, he's been able to do a much better job establishing early position and backing his man down, where he often relies on simple hook shots with either hand to finish, as he boasts good touch around the rim. While he finishes efficiently in this regard at the NCAA level, he often gets very little separation even against this competition, and it's tough to see this aspect of his game translating successfully to the NBA in its current form. While it's not something to count out if he can continue developing into a better overall athlete, it's hard to see it being a skill any NBA team would rely on from him.

Murphy's physical changes have also had notable effects on his defense, where he's actually developed into a very solid post defender over the years, showing good fundamentals, effort level, and a solid strength base to keep his man from backing him down. He uses his size and length well to contest shots, and in this area he possesses more than enough agility and lateral quickness to stay in front of his man. On the other hand, his defensively ability on the perimeter and stepping out on pick-and-rolls isn't quite what it was earlier in his career, as he often looks like a fish out of water on isolation mismatches and struggles to maintain his balance on pick-and-rolls when hedging screens.

The most concerning aspect for Murphy on the defensive end, however, is his poor rebounding numbers, as the 6.2 defensive boards per 40 pace adjusted he posted as a senior (the highest mark of his career) is well below average for a big man. Murphy ranks 15 out of the 18 collegiate power forwards in our top-100 rankings in defensive rebounding, which is certainly something he could do a better job with and likely will need to at the next level.

Looking forward, Murphy's potential as a shooting specialist stretch four should give him ample opportunities to hear his name called on draft night and/or find a home in the NBA, but given there isn't anything else he does at an above average level from an NBA perspective, he will likely need a little luck to find that niche.

His steady improvement in college, the work he put in developing his body off the court, and his solid basketball IQ are all things that should help him, but maximizing his abilities as a defender and rebounder would definitely improve his chances at having a long career. Even without those improvements, it's not hard to draw a comparison between Murphy and fellow Florida alum Matt Bonner, who's managed to have a long and successful NBA career with a very similar skill set and physical profile, but finding that success is easier said than done for one-dimensional players, so adding another way to distinguish his game would be very helpful in shoring up his chances.
Read Next...