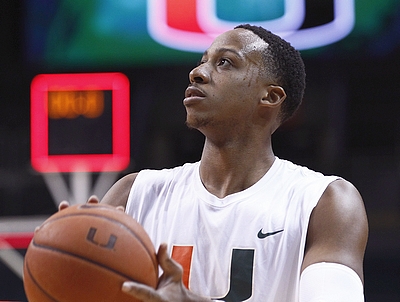 Derek Bodner
@DerekBodnerNBA
Kenny Kadji has established himself as one of the most skilled big men in college basketball, playing for a Miami team that remains undefeated in the ACC. How does he stack up as a NBA prospect and will his advanced age hurt him come draft time? 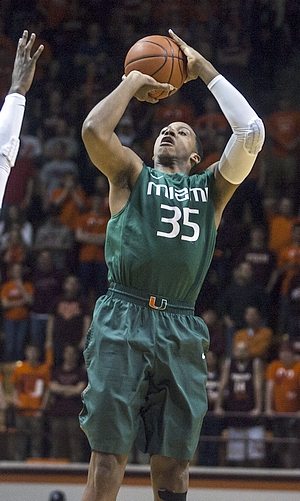 After a strong junior season, Kenny Kadji continues to be a major contributor for second year coach Jim Larranaga and the Miami Hurricanes, who currently possess a 20-3 overall record and sit atop the ACC with a 13-0 record, including impressive wins over Duke, Michigan State, Virginia, North Carolina State, and others.

On the offensive side of the court, Kadji is one of the most versatile players you'll find in college basketball, as he's capable of putting the ball in the net in a variety of ways. His floor-spacing ability remains one of his most intriguing aspects as a NBA prospect, with most of his jumpers coming from catch and shoot situations and pick and rolls. He has soft touch on his jump shot, with good form and a high release point that makes him very difficult to contest considering his terrific size.

While the 36.5% he is shooting from 3 point range is a drop off from the 41.8% he shot his junior year, he has upped his attempts to 3.5 three point attempts per game, and his overall point per possession on jump shots is up to an excellent 1.094 points per possession according to Synergy Sports Technology, an increase from 1.019 the previous season. 3-point attempts now represent over 80% of his jump shots, taking the long two point jump shots virtually out of his game and creating an overall more efficient jump shooter. Kadji appears to have extended his range, and should not have much trouble adjusting out to the longer NBA three point line.

Kadji also continues to see considerable touches in the post. While he's not exceptionally tough or athletic and his footwork is not the most advanced out there in terms of counter moves, he has great size, a strong frame, long arms, and a high skill-level, which goes a long way at the college level on a team with too many offensive options for a defense to key in on him on any particular night. He has a high release point on his right handed hook that is tough to defend, and shows nice touch going over his left shoulder on a turnaround jump shot, both of which he appears to not have much trouble getting off over length.

On the negative side, most of his moves in the post are finished going away from the basket, and he doesn't draw fouls at a very high rate. The combination of a lack of power post move going towards the basket and his role as a jump shooter create a big man who is towards the bottom third of our database for power forward prospects in terms of free throw attempts per field goal attempts.

Kadji is capable of putting the ball on the floor fairly well for a player his size, showing the ability to beat opposing big men off the dribble with straight line drives going mostly to his right, usually to attack defenders closing out too aggressively in catch and shoot situations. He can also handle the ball a bit in transition. He doesn't have much of a left hand, though, and can become ineffective and turnover prone when met with resistance and forced to change direction. He has fairly good touch on a floater in the lane when he does get there, and his length, touch and scoring instincts make him a good finisher in the paint, despite the fact that he's not incredibly quick or explosive.

Defensively, Kadji doesn't possess tremendous leaping ability and struggles to move his feet laterally at times on the perimeter, both concerns when projecting to the next level. That being said, he stands 6'11", with very good length and a refined frame. He uses his length well defensively, both in the post and as a weakside help defender, and he has a strong lower body and does a good job holding position in the paint, with good timing on blocked shots. Miami is one of the top ranked defensive teams in the country, and Kadji is an integral piece of that equation. He's seeing plenty of minutes at the power forward position, which is very unique at the college level considering his size, and gives him a nice framework to build off for the pro level.

One of Kadji's main weaknesses last year was on the defensive glass, where his 5.1 defensive rebounds per 40 minutes pace adjusted were one of the worst figures in our database for a big man. He has improved upon that considerably, up to 7.1 defensive rebounds per 40 minutes pace adjusted, which, while still only an average figure for a power forward prospect is leaps and bounds better than his production last year. His length and lower body strength help him in this regard, and he has done a better job boxing out and fighting for position early. While still not the most instinctive rebounder, and still prone to suffering lapses in intensity at times, his improvement in this area is critical for his ability to find a role at the next level.

Overall, Kadji is having an outstanding senior season and has to be drawing plenty of attention to himself with the skill-level and scoring instincts he's displayed as a long-armed and strong 6-11 power forward. His improvement on the defensive glass and as a shooter makes it easier to project a trajectory where he could be a contributor, something he'll have to be able to do fairly early in his career, as he will be 25 years old at the time of the draft. His combination of scoring instincts, perimeter shooting ability and size is intriguing in today's NBA, particularly as Miami continues to have success in the ACC as they gear up for an NCAA tournament run.

Even though Kadji's advanced age competing against players 3-7 years younger than him on any given night makes his accomplishments this season slightly less impressive, there is a real dearth of skilled, non-one dimensional floor spacing big men who can hold their own defensively and on the glass, which should earn him plenty of looks over the course of the NBA pre-draft process.
Read Next...