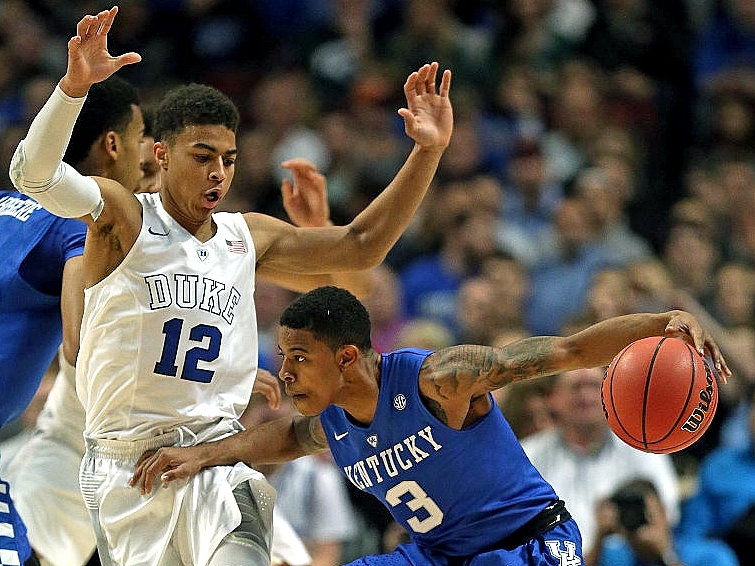 Jon Giesbrecht
@Jon_Giesbrecht
Tyler Ulis ranks among the most dynamic point guard prospects in the NBA despite standing just 5'9. Averaging 14.2 points, 3.2 rebounds, and 5.9 assists per game, Ulis has come up big for a young, developing Kentucky team in key moments early on.More DX 2015-2016 Season Video Breakdowns
-Ben Simmons vs Kentucky
-Buddy Hield's 46 point Explosion vs Kansas
-Kay Felder Strengths and Weaknesses Breakdown
-Pascal Siakam vs Baylor Video Analysis
-Ben Simmons vs Henry Ellenson Head to Head Matchup Analysis
-Karl-Anthony Towns vs Kristaps Porzingis Head to Head Matchup Analysis
-D'Angelo Russell vs Emmanuel Mudiay Head to Head Matchup AnalysisComing off a surprising loss to a very young Ohio State team that had been reeling from a string of early losses, Kentucky looked to rebound a week later against a Louisville team that ranks among the top defensive units in the country this season.

With plenty of scouts in attendance, Tyler Ulis led the Wildcats to a 75-73 victory turning in arguably his top individual performance of the season scoring 21 points on 12 shots to go along with 8 assists and only 1 turnover. While it would be foolish to draw too many long term conclusions off this contest alone, this is a very interesting matchup to analyze nonetheless due to the relentless pressure Kentucky's heated in-state rival puts on opposing guards.

Via Jon Giesbrecht, here's a video breakdown of some of the more notable things NBA scouts were able to see last night, both good and bad, on either end of the floor.