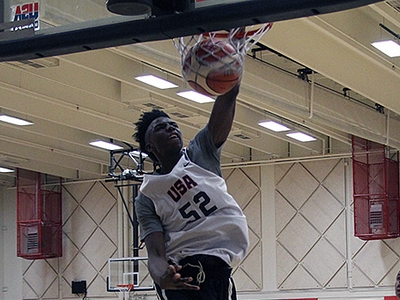 Strengths
-Not exceptionally tall, but has a gigantic plus-seven wingspan that allows him to play significantly bigger than his height. Frame has continued to fill out since the last time we saw him
-One of the best athletes in high school basketball. Has great quickness and is incredibly explosive around the rim.
-Extremely effective in transition. Very difficult to contain in the open floor.
-Can straight line attack with a very quick first step
-Doesn't shy away from contact. Takes ball strong to the basket, drawing plenty of fouls in the process
-Shooting mechanics don't look terrible. Gets good rotation. Comes out of hand decently. Jumper doesn't appear to be broken
-High energy wing player who flies around defensively and crashes the glass on both ends of the floor with great purpose. Shows really nice anticipation skills getting in the passing lanes. Could be a terror locking down point and shooting guards with his length and quickness.

Weaknesses
-Measured just 6'3 ¼ without shoes last summer
-Struggles to make shots consistently. Release is a little slow due to windup and ball-dip. Mechanics don't look bad, but airballed quite a few jumpers in Colorado Springs. 8/48 (17%) from beyond the arc in the EYBL this season. Only shooting 64% from the free throw line.
-Advanced ball-handling skills are still a work in progress in the half-court. Doesn't change directions or speeds very well. Struggles to react to help defenses at times.
-Not a great passer. Doesn't have an exceptional feel for the game. Can get very wild at times. Committed more turnovers (41) than assists (33) in the EYBL this season thus far (16 games).

Outlook Highly rated shooting guard prospect who continues to make strides with his frame and skill-level. Tremendous athlete who plays with a very high intensity level. Will need to refine his jump-shot, ball-handling and passing ability, but has significant potential with the strong foundation he already brings to the table.

Outlook Shooting guard with a world of talent at his disposal. Still figuring out how to put everything together on a consistent basis. Really struggled at times in the three days we watched him in Colorado Springs. Still dropped some glimpses to remind you just how talented he is. Will need to find a higher intensity level to allow him to utilize his tools more consistently on both ends of the floor, especially when the game doesn't revolve around him.

Strengths
-Has good size for a SG at 6'6. Has a frame that should fill out nicely in time
-Solid athlete. Moves well. Has some leaping ability
-Tremendous shooting stroke. Big time catch and shoot threat, especially when he catches it on the hop. Gets great rotation on the ball and has deep range. Excellent shot preparation. Shot 40% for 3 on over six attempts per game in the Nike EYBL.
-Very intelligent player. Moves the ball crisply. Finds open man. Keeps the offense flowing. Passes ahead in transition. 2/1 assist to turnover ratio in EYBL play.
-Competitive defensively. Uses his size to his advantage. Gets right up in opposing guards. Holds his ground against bigger players too. Stays in front nicely

Weaknesses
-Doesn't have great length. Measured just a 6'6 wingspan last summer. Frame has potential but has a lot of work to do to.
-Can be somewhat one dimensional offensively. Not a great ball-handler. Only go to the free throw line 25 times in nearly 500 minutes in the EYBL.
-Didn't show much of a pull-up game. Mostly a catch and shoot guy at this stage
-May struggle defensively early on with his lack of length and strength.

Outlook Has the makings of an outstanding college player. Could emerge as a bonafide NBA prospect down the road as he continues to improve his frame and versatility.