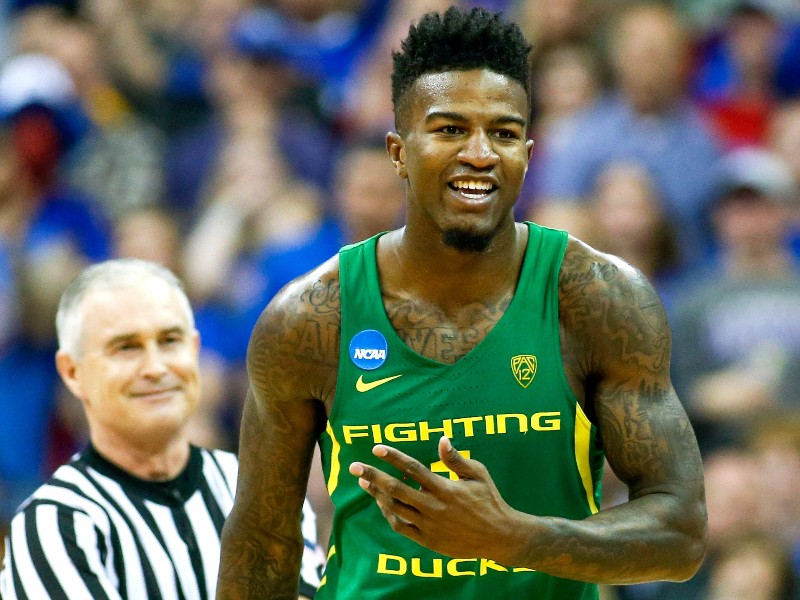 Jordan Bell, the 2017 Pac 12 Defensive Player of the year, burst on to the national consciousness with a memorable Elite Eight performance in a victory of Kansas which included 8 blocks, 13 rebounds, 4 assists, and numerous game changing plays on the defensive end.  The Long Beach, California native was a solid piece for the Ducks as a redshirt sophomore, but with the departure of Elgin Cook and Dwayne Benjamin, Bell took on a whole new role and starred as the defensive and rebounding anchor of an Oregon team that made its first NCAA Final Four appearance since 1939.

At 6'9, 225 pounds, and a wingspan measuring 6'11, Bell is somewhat stuck between the power forward and center position from a physical perspective, but projects more as a 5 at the NBA level given his offensive skill set.  What Bell lacks in ideal size, length and bulk at the center position, he makes up for with effort and elite-level athletic ability, which allows him to impact the game as rebounder, shot blocking threat, pick and roll switcher, finisher, and transition scorer.

On the offensive end, Bell had the most productive season of his college career, averaging a career best 11.0 points per game on an efficient 63.6% from the field.  The two aspects of Bell's offensive game where he contributes most are in transition and as a catch and finish guy around the rim.  He runs the floor extremely well for a big, and has the athleticism and coordination to be an effective rim runner and lob target in the open court.  In the half court, he is best cutting off the ball, or sitting along the baseline waiting for dump off finishes.  He has great hands and is a quick leaper who can catch and finish above the rim very swiftly.  His mobility, hands, and athleticism should project him as viable threat diving at the rim out of pick and rolls.  He wasn't featured heavily as a pick and roll option at Oregon (just 9.5% of his total offense via Synergy), due to the Ducks' personnel, but proved to be capable when he was.

Skill wise, Bell's offensive production as a scorer is very much a work in progress.  While he has shown improvement with his back to the basket, he lacks any real advanced moves and relies on short jump hooks around the rim.  His touch around the basket comes and goes, and he can be turnover prone creating on the low block when faced with pressure.

He shot just 10 for 31 on jumpers this year, with the majority of those makes coming inside of 17 feet.  He struggles with consistency on his perimeter shot, and often passes up open looks without creating any real high percentage opportunities off the bounce.  His release is on the slow side and he gets an inconsistent trajectory on his shot outside of mid-range areas.  His ability to improve on his jump shot will be key to opening up the rest of his offensive game, and allowing for better team spacing as defenses don't currently have to worry about him stretching the floor.

While Bell struggles for the most part creating offense in one on one situations, he does handle and pass well for a guy at his position.  He has a fairly quick first step and is capable of attacking the basket in a straight line and finishing with either hand.  He averaged 2.5 assists per 40 minutes this season, and his ability to read the floor on the move out of short rolls should translate very well with NBA spacing.

An aspect of Bell's game that he excels in is his ability to rebound the basketball.  He averaged a career best 11.9 rebounds per 40 minutes, including 12+ rebounds in each of the Ducks NCAA Tournament's games.  He is best on the offensive glass, where he is aggressive and has great instincts attacking the ball off the rim.  His timing and athleticism allow him to be a big time threat attacking the offensive glass for tip-dunks.  His motor really shines on the offensive boards as well, where he shows his ability to get off the floor quickly and make multiple effort plays around the rim.

Defensively, Bell also has the potential to be a solid rebounder, but relies more on his athleticism rather than boxing out technique, and can get caught ball watching at times.  His lack of bulk is somewhat of a concern here, as he is prone to getting moved around by stronger players, something that could be somewhat of an issue on the defensive glass in the NBA.

A lot of the intrigue around Bell in the NBA stems from the versatility and impact that he can have on the defensive end of the floor.  Despite his lack of ideal size and length, he is a tremendous weak side shot blocker, and shows incredible timing rotating over off the ball and protecting the rim.  He averaged 3.1 blocks per 40 minutes, with many of those coming in highlight reel fashion.  He controls the paint in the half court as an interior shot blocking presence and has the speed and leaping ability to make chase down blocks in transition.

Outside of his shot blocking ability, he also has great anticipation getting into passing lanes, and has the lateral quickness to be able to switch onto smaller guards on the perimeter.  His ability to switch ball screens on the perimeter and guard multiple positions will be huge for his ability to stay on the floor at the next level.  At just 6'9 he does struggle to guard more traditional big men on the block, but the modern style of the NBA favors Bell's ability to stay on the floor in small ball lineups and spend time plugging gaps and guarding multiple positions.  A creative coaching staff might try and use him as a stopper on go-to scorers who are bigger wing players or combo forward types, and he appears to have the quickness to hold his own here.

It took four years at Oregon for Jordan Bell to fully grow into his role as a defensive enforcer and rebounder, but it comes at a good time, as many NBA teams are in the market for a big man who can defend multiple positions, rebound, protect the basket, and stay on the court with guard oriented lineups. He has a lot of room for improvement on the offensive end of the floor, but his energy and defense should translate well at the NBA level and if he can carve out a similar blue collar role with an NBA team, he should have a successful career.
Read Next...