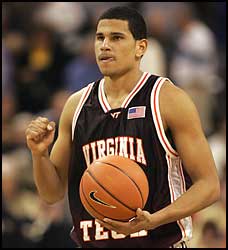 Joey Whelan
@DraftExpress
Vassallo enters the year as one of the most prolific shooters that the collegiate game has to offer. Awfully productive last season, the senior will have the opportunity to bolster his numbers even more given the graduation of Deron Washington on a very young Hokie team.

The biggest asset that Vassallo brings to the table is easily his ability to shoot the ball from beyond the three point arc. Ranking 11th in DraftExpress percentage of team three pointers made and 22nd in DraftExpress overall three pointers made, he places himself statistically amongst the top 7 or 8 players returning to the collegiate game this season in those categories. His size, ability to get his shot off quickly, and high release point make his shot extremely difficult to block for even more athletic defenders.

Improving over the last year was Vassallos game off of the bounce, although it is still subpar for a shooting guard prospect. He has proven capable of putting the ball on the deck one or two times and knocking down a jumper from midrange, although he rarely opts to take the ball all the way to the rim. Ball handling still remains a concern on the offensive end, especially when combined with his below average first step. On the bright side though, A.D. has shown off some nifty court vision in terms of finding the open man when he isnt able to score himself. He turns the ball over too much considering how heavily he relies on his jump-shot, though, sporting a negative assist to turnover ratio.

The Puerto Rico native uses his height and burly build to do a decent job of rebounding the ball for a swingman, caroming boards to the tune of 4.6 per game. His size doesnt especially help him on the defensive end though, where he struggles to guard even small forwards at the collegiate level. Vassallos poor lateral quickness hurts him especially when trying to contain players with strong dribble drive arsenals.

There will certainly be interest amongst NBA personnel for Vassallo simply due to his ability to shoot the ball from deep and put points on the board. He will have the chance to increase his scoring output this year while getting plenty of exposure in the ACC. Vassallo should have the opportunity to strut his stuff at Portsmouth and then possibly the NBA Pre-Draft camp, and strong showings at either should give him the opportunity to at least receive a training camp invite.
Read full article

Jonathan Watters
@DraftExpress
A.D Vassallo is a player who saw inconsistent minutes and gave inconsistent production in his first year at Virginia Tech. After a slow start, Vassallo was able to carve himself a niche in the second half of the season, playing 30+ minutes per game for six straight games in January and February, scoring in double digits in four of them, one of them being for 29 points. His production and minutes began to dip down after that, though he still held a spot in the rotation. All of Virginia Techs starters are returning this season, so Vassallo is going to be in a fight for minutes, though he should easily trump his 16.6 average from last season.

Vassallos best skill at this moment is his outside shooting ability, specifically when spotting up. He has a pretty stroke and decent release speed to go along with a high release point, which allows him to often shoot over defenders. He rarely shoots from the outside off of more than one dribble, though he occasionally takes some questionable shots, be it for being too far behind the arc or having a hand in his face.

Vassallos offensive repertoire is pretty lacking beyond his outside shot, as hes not extremely proficient attacking the hole. His first step is nothing special, though the respect he gets for his outside shot gives him some opportunities to get into the lane. Once in the lane, he can tend to pull-up for a shot too early, sometimes with a hand in his face or being off-balanced. When he does go all the way to the rim, he has pretty good touch around the basket, though he lacks much creativity with his shots. It often seems as if hes chucking the ball at the basket while on the move, both when its a lay-up or a pull-up jumper. Vassallo will need to work on his ability to create better once in the lane or his ability to more effectively shoot bad shots before he takes his offensive game to the next level. Because of an unspectacular first step, Vassallo would be better served working on his bad-shot shooting. Putting in a lot of practice on some on-the-move, off-balance, contested floaters the way Adam Morrison does could do a lot for his already respectable mid-range game. He shows some really nice instincts in this regard early on, though.

Vassallo, with his strong 66, 215-pound build, does attack the glass pretty well offensively, getting good position and having good anticipation for a swingman. He doesnt contribute much in the other areas on offense, though, not being an incredibly proficient dribbler or passer. Defensively, Vassallo needs to work on his quickness in staying in front of players on the perimeter.

Vassallo has a strong skill to build upon in his outside shot, and if he can add another consistent element to his offensive game while improving his man-to-man defense, he could average 30+ minutes a game and begin to show what hes capable of as a prospect. Working on his slashing game to complement his outside shooting should be his biggest concern on offense. This season will go a long way in telling if Vassallo is an NBA prospect or not.
Read full article