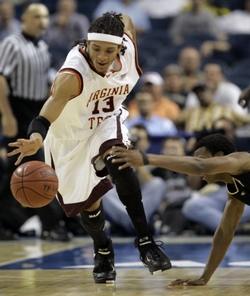 Joey Whelan
@DraftExpress
Deron Washington, one of the local favorites, had his best performance in his final game, scoring 21 points, including a surprising 4-5 shooting from beyond the arc, much higher than his regular season statistics would have you think he was capable of. This game really showcased Washingtons athleticism as he was given several opportunities in the open floor to make plays for his team. In the half court set he did show a quick first step but his lack of tremendous ball handling or savvy kept him from being more effective at taking defenders off the dribble. As was the case during the regular season he was inconsistent on the offensive end, making both impressive and poor plays when he had the ball. While there were flashes of ability at multiple points throughout the week, Washington confirmed what we already knew about him: he is a tremendous athlete with a poor basketball IQ and plenty of skill development needed. Defensively he gambled excessively and seemed to play with a reckless abandon that had to make those around him nervous, as his play frequently borders on dirty. Most concerning was his poor body language and the way he just didnt seem to fit in with anyone else on the team, not cheering his teammates on, and showing very little regard for making anyone except himself look good.
Read full article

Joey Whelan
@DraftExpress
Deron Washington had an inconsistent junior season for Virginia Tech, but he came on strong in the later half of the season, giving us a glimpse into the potential of an extremely athletic wingman. Washington stands 67, with good length and excellent athleticism, and he has a nice groundwork of skills to go along with it. With teammates Jamon Gordon, Zabian Dowdell, and Coleman Collins all graduating, Washington will be thrust into a feature role, where hell be able to show just how good of a prospect he really is.

Washington doesnt really have one stand-out skill offensively, but hes shown flashes of very good things in all areas, starting with his outside shot. He shot a less than impressive .308 from three-point range last season, but his shooting form is solid, he has a decently quick release. He also has a consistent release point, and he looks confident taking it. With more work, its definitely feasible to see him become a much better outside shooter.

Washingtons pull-up jumper is another weapon of his, and hes had a bit more success with that than his outside shot thus far in his career. His accuracy isnt all there yet consistently, but one thing he is excellent with is his body control, as hes able to pull up on a dime and maintain solid form, keeping his body upright and square to the basket. He has a nice in-between game when he catches the ball around 10-18 feet away from the basket, being able to put the ball on the floor for one or two dribbles and showing excellent footwork on little slashing drives; using drop-steps, pivots, hesitations, and fakes to find a route to the basket. Washington struggles a bit when he is in pure isolation situations far away from the basket, though, as his ball-handling could use some work, especially his left hand, which he rarely goes to.

At the basket, Washington shies away from contact due to his lack of strength, and while he shows good creativity in getting to the rim with his footwork, he could use a bit more polish in creating high-percentage shots once at the rim, struggling when hes contested in that area. Washington does do a good job moving without the ball, though, getting open near the rim and easily finishing on cuts with his explosive athleticism.

Defensively, Washington has all the tools you look for in a defender, with his length, athleticism, and quickness. At times he looks very good playing pressure defense, not giving his man much breathing room and moving his feet to stay in front of his man, but at other times he can look lazy and not put in the effort laterally. He often was matched up with opposing big men last year, even though hes clearly a SG/SF, so thats not helping him develop his perimeter defense. Hes woeful defending in the post, not possessing the footwork or strength to force his opponent into tough shots, though his length occasionally compensates.

All in all, Washington could be a bit of a sleeper prospect at this moment, and he should have plenty of opportunities to awake over the course of the season, as he should get extended minutes and offensive touches on the diminished Virginia Tech team. Right now hed probably be a fringe second rounder, but with his physical tools and hopefully improving skill-set, he could easily raise his stock over the course of the year and down the road at the pre-draft camps.
Read full article

Joey Whelan
@DraftExpress
While it wasnt exactly a pretty showing for Virginia Tech, one player who acquitted himself quite nicely isnt headed out of town quite yet. That would be third year wing Deron Washington, who has quietly emerged as an intriguing professional prospect. Washington will never be the smartest or craftiest player on the court, but has found more ways to contribute as his career has progressed. The core of Washingtons appeal is his downright freakish athleticism; legitimate bounce realistically comparable to that of an Eddie Robinson or Stephen Jackson.

Just like Robinson, Washingtons biggest issues currently show up in his lack of strength. For every play Washington is able to make thanks to his extreme length and quick leaping ability, there are two where he loses half a step because of his inability to get physical. Nonetheless, his wiry athleticism and reach allows him to make plays that the average wing athlete wouldnt even bother to attempt. His length and lift alone allowed him to average 1.2 blocks and 1.0 steals per game in 2007. He very much looks the part of an NBA wing streaking down the court and finishing over defenders in fast break situations, or slashing to the basket and hanging in the air for acrobatic half-court scores. Washingtons outside jumper is still quite inconsistent, but looked very much improved in the first round win over Illinois when he knocked down two crucial 3-pointers to get the Hokies back into the game. He was the lone Virginia Tech player able to create much of anything against SIUs machine-like team defense, slashing to the rim for several nifty scores.

With Dowdell and Gordon out of eligibility, 2008 will be a major opportunity for Washington to break out. He must continue to improve his ball-handling and shooting consistency, and add enough strength that he can take a bit of contact when creating his own offense. His court sense is improved, but he still must learn to avoid the occasional mental lapse at the wrong time. It is easy to see Washington as the type of player who thrives in the supporting role he was in this year, but probably wont ever thrive as the go-to scorer Greenberg is now in search of. With that said, Washington has improved to the point where continued steps in the right direction could allow him to emerge as a standout in the ACC and a legitimate NBA Draft prospect.
Read full article