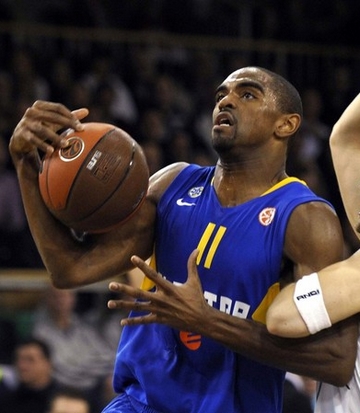 Anderson has NBA physical tools, nice size, a good frame, long arms and solid athleticism, to go along with aggressive shot-creating ability and nice scoring instincts. Maccabi gives him a lot of freedom in their offense, and Anderson is responding by showing terrific all-around versatility. He gets to the free throw line, can make plays for others and is a solid defender. On the downside, hes a bit too turnover prone and shows poor shot-selection at times, not being as consistent a perimeter shooter as you might hope. Still, considering his physical tools and the way hes producing at the highest level of European basketball, its a pretty safe bet to say that Anderson deserves another look. He has another year on his contract with Maccabi, but has a free NBA opt-out clause he can take advantage of until the latter part of July.
Read full article

Strengths
Anderson is a physical, strong SG/SF that likes to post up and can defend with toughness. He is very good at scoring in the post for a guard, thanks to a very solid back to the basket game, and a surprisingly effective short hook shot. He is a strong finisher close to the hoop and knows how to use his physical strength to his advantage.

He has improved his outside range over his career and is a moderately good outside shooter at this point. He's not a great shooter, but he can shoot from deep and usually makes them if he is left open. He has a very good touch around the basket and in the post is where he is most dangerous on offense.

Anderson has very good hands; if he gets position down low, he just vacuums the ball into his grasp. He usually makes good decisions and if he has the mismatch against a smaller guard, he will take advantage of it.

On offense, Michigan State sometimes uses Anderson as the PG and that shows that he has some versatility and can handle the basketball. He is not a true PG, but he does have ball-handling skills and can set up his teammates if asked to.

Anderson is a very good leader as well; he has been one of the hardest working players on Michigan State over the past four seasons. He is an intense, fiery competitor that gets along with his teammates but also expects the best out of them as well. He has a history of making big shots throughout the season and is not afraid to take the big shot if he needs to.


Weaknesses
Anderson lacks a true position in the pros because at Michigan State he has been asked to play four different positions on offense and defense.

He has adequate ball handling skills for a SF, but his lack of range on his jump shot will hinder his performance at the shooting guard position. However, in the NBA, the position prospects play is usually the position they can defend, and Anderson can defend NBA SF's I believe, even though he may be just a bit undersized for it. The position issue is a question about Anderson because he might be labeled a tweener. He has the size of a guard yet he has played most effectively in the post in college. That's also where coach Izzo usually sends him on defense as well.

Anderson is not a true SG because he cannot shoot that well from the perimeter. He has improved on his shooting over his career, but overall he is still well below average in this aspect, shooting only 30% on the year on a limited number of attempts. What will get Anderson on the court are his defensive skills, not his offensive skills. At times Anderson has been known to hit the outside shot, but generally, he is a streaky shooter at best outside of the paint.

Anderson is only average athletically for an NBA SG. He does not run the floor very well and looks a bit slow on offense. Coach Izzo having Anderson guard PF's on defense has hurt his NBA potential because at the next level he is a SG/SF, however he rarely guards players on the perimeter.

However, to his credit, it is impressive that a guard with a 6-6 220 frame can defend Big Ten PF's. That also helps explain the type of player Anderson is, he does what's asked of him and doesn't complain.

At times, his fundamentals on defense are poor and he gets a bit complacent. Since he is used to defending slower plays most of the time, when he switches out on perimeter players he'll often get beat off the dribble. To be effective in the league he will have to learn all the tricks to become a good overall defender and will have to learn how to play against players that are better athletes than he is.

His overall ball handling ability is also a question; at times, he dribbles the ball too much and sometimes has the ball stolen from him if pressured. He can create off the dribble a bit, but I would not say he has a quick first step. Instead, he uses his strength and footwork to get into the lane.


Competition
His senior season has easily been the best of his career so far. He is scoring a lot more on offense and is doing a very good job on defense as well. His best game by far was against Wisconsin at home on senior day when he put up 28 points and was perfect from the field. As a junior, he had solid games against good competition in Kansas, Oklahoma and Kentucky. Anderson will not usually stand out statistically, though, because he is best on the defensive end.

Outlook
Anderson is an NBA prospect because of his defensive abilities and has been taught by a good defensive coach for four years at Michigan State. He is not a great athlete, but he has nice size and has a good physical build for a guard. He could play SG or SF and be a solid defender off the bench. His work ethic and leadership ability improves his chances of making it in the NBA as well.

He is not an outstanding athlete, he lacks great quickness and court speed, but he is a quality athlete whose main asset is his physical strength and toughness for a guard. What Anderson lacks in quickness he makes up for with good footwork and anticipation skills on defense. His physical strength is an advantage that helps him on the defensive end as well.

If Anderson is drafted, he will most likely be a mid 2nd round pick to a late 2nd round pick. He is not an outstanding shooter, and this is his biggest weakness considering the position he'll be expected to play.


Comments
Even though Anderson is not an outstanding athlete, I think he has enough to get by. He is a strong finisher around the hoop and he has thrown down some very aggressive dunks during his career as a Spartan. I really like his versatility to handle the basketball; at times, he has been the team's best ball handler and was the best at creating his own shot of the dribble. When he started out at Michigan State, he was nothing special, but he has worked his way into becoming a very good defensive player and a physically powerful forward/guard.

I think Anderson's toughness and leadership abilities are underrated, when he gets the chance to show his abilities I think he will take advantage of them. I have no doubt though that he will be picked up by someone because he is a fine defensive player.
Read full article