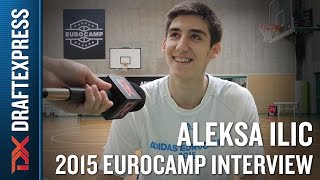 DraftExpress
@DraftExpress
Intriguing Montegrin forward Aleksa Ilic measured 6'8.25 without shoes with a 7'0.5 wingspan. Registering only a 29 inch maximum vertical leap Ilic's real ability belies his testing results as his athletic feats for Sutjesk Niksic this season and for the Montenegrin U18 national team suggest he's one the most explosive young athletes in European basketball. Ilic's game doesn't resemble that of a typical international NBA prospect at this point, and he still needs to work on his frail 178-pound frame, but the 18 year old is almost big enough to play the power forward position at the NBA level, where his athletic ability would be an asset if his skill level rounds out.

-19 year old center Zoran Nikolic has impressive size, standing 6'10.5 without shoes to go along with a 233-pound frame, a 9'1.5 standing reach and a 7'1.75 wingspan. Playing primarily for Prat Joventut in the LEB Gold, Nikolic was impressive at times this weekend, and his strong measurements for a center are a bonus.
Read full article