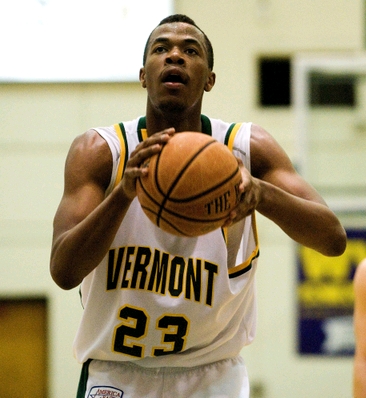 Joey Whelan
@DraftExpress
Antonio Andersons senior season ended in disappointment, when Memphis was eliminated from the Sweet 16 by streaking Missouri. Despite the loss, the fourth year shooting guard was able to display some of the different aspects of his game that will make him an appealing prospect to some team somewhere. In fact, the season as a whole was a major plus, as Anderson saw increases in nearly every major statistical category across the board in his last year with the Tigers.

When we last took a look at Anderson before the season began, the biggest knock against him was his lack of shooting ability and poor ball handling skills. With the year now over, we can say he made some marginal improvements in these areas, but still has a lot of work to do. Anderson shot a career best 45% from the floor this year, even while taking more shots. This was due in large part to the improvements he showed in his ability to finish in the lane. While last season, over 50% of his shots came in spot up situations, that number dropped to 34%, while there was a significant increase in the number of times he put the ball on the deck and attacked the rim. Anderson still struggles mightily with his perimeter game, seeing his three-point field goal percentage drop eight points from last year. The biggest issue in his form right now appears to be the tendency for his non-shooting elbow to fly out and alter his shot from time to time. This may be the biggest issue holding him back from establishing himself as an NBA player long term.

Anderson still does very well in transition thanks to his athleticism and hustle. He runs the floor well and when he gets momentum going proves to have pretty good leaping ability. Generally, this athleticism tends to disappear in the half court set for a few reasons. Despite having good quickness, the previously mentioned poor ball handling skills prevent the senior from beating most defenders off the dribble. While he may show good elevation when in a full sprint, Anderson is unable to explode when caught in traffic as he often is out of control with the ball by that point. With all of that said though, he does have a strong enough body that he can finish with contact in the lane. His hustle is also on constant display in the paint where he averages better than an offensive rebound per game, a good number for a perimeter player.

What proved to be the biggest eye opener with Anderson this season was with the ball in his hands more often this season, he proved to be an apt playmaker, averaging 4.5 assists per game. He has never been a big time scorer during his tenure at Memphis, but he proved that on nights when he isnt a scoring threat of any kind he can still be a major offensive factor. His 11-assist performance in a second round win over Maryland proved that statement to be true.

Defense will ultimately wind up being Andersons meal ticket in the long run. As has been mentioned in the past, the seniors size and wingspan allow him to cover any perimeter position and he has proven time and again to be more than up for the challenge of a tough scorer. He brings tremendous hustle to this end of the floor, fighting through screens and rebounding the basketball well. Anderson is a very smart defender, not often biting on fakes but rather playing with his feet and bodying up opponents when it is necessary. His combination of strength, intensity and lateral quickness makes it very difficult for players to beat him off the dribble.

At the beginning of the season we posed the question, will Anderson step up as a senior or continue to be a role player for Memphis. The answer has been a little bit of both. While he saw improvements in his numbers and offensive game this year, he was still not a main option for the Tigers when they had the basketball. Ultimately, Anderson may not stick in the NBA unless he improves his perimeter shooting significantly, but he will certainly play somewhere overseas where he has the potential to be a solid player. His size and athleticism make him an appealing prospect as does his defensive prowess. With a couple of weeks left until many of the pre draft camps begin, Anderson will have some time to work on his game before getting the chance to showcase himself in front of GMs and scouts.
Read full article

Joey Whelan
@DraftExpress
Antonio Anderson is coming off a solid junior season where he was a key contributor on a Memphis team that made it all the way to the national championship game. For his whole career, he has been a reliable role-player for the Tigers, where he has led the team in minutes played for three straight seasons a great testament to his stamina and the high regard that Coach John Calipari has for him. To play nearly 30 minutes a game on a deep team that stresses pressure defense and a free flowing up tempo offense is rather impressive.

At 23 years old (will be 24 before next Junes draft, a bit of a red flag) he is the most experienced player on the team and a lot will be demanded of him to get the Tigers back to the National Championship game.

Andersons strongest asset is certainly on the defensive end. At 6-6 and 214 lbs, he has the ability to guard three positions and is always matched up against the oppositions best perimeter player. He has a very long wingspan and combining that with his great lateral quickness, hes extremely difficult to score on. His work ethic and energy is also a factor as he gives everything he has and never gives up on contesting a shot or chasing down a loose ball. Anderson is as physical as you can be at the guard spot as he often fights through screens and does a good job denying passing lanes.

The improvements that Anderson will need to make are on the offensive end, particularly with his shooting and ball-handling skills. Anderson lacks the ball-handling skills needed to create shots for himself off the dribble, as he struggles changing directions with the ball and does not have much of a left hand to speak of. He also does not possess any type of mid-range either. Many teams chose to double off him and Joey Dorsey last season, as he is not much of a threat to score in the half-court. 28% of his offense comes in transition according to Synergy Sports Technology, where he is absolutely outstanding thanks to his terrific speed and explosiveness in the open court.

Beyond his ability to score off leak-outs in transition, Anderson is almost exclusively a spot-up shooter offensively due to his inability to create. 51.63% of his offense comes in this fashion, something opposing teams do not mind in the least bit. Anderson shot just 40% from the field, and 33% from beyond the arc.

He has shown no improvement in this area over his 3 years as his FG% has virtually stayed the same while his free throw shooting has dropped from 63% his first 2 seasons to 57% last year  very low for any perimeter player. His 3 point shooting has fluctuated from 36.5% his freshman season, down to 24.5% his sophomore year and 33.3% last season. All of these numbers will have to increase if hell ever get serious prospect consideration. Considering the fact that he shoots the ball on his way down after elevating off the floor, it seems somewhat unlikely that hell be able to expand his range to the NBA 3-point line.

One aspect of his offensive game this is outstanding is his ability to take care of the ball. Last year he had an incredible 2.62 assist/TO ratio, which was good for 5th in the country. He was 15th in fewest turnovers with 1.7 a game for his statistics per 40 pace adjusted, something that was likely influenced in part by his very small role offensively. Anderson was a point guard in high school and clearly has nice court vision, even if his ball-handling skills do not appear to have progressed much since then.

This will be an interesting year for Anderson. With the departure of Derrick Rose and Chris Douglas-Roberts to the NBA, will Andersons role expand? Or will he continue his steady play as a role player? Whatever the case may be, there is no question that his defensive abilities, versatility, selfless attitude, and the amount of experience hes garnered at the highest level of college basketball make him intriguing.
Read full article

Joey Whelan
@DraftExpress
Antonio Andersons sophomore season came to a disappointing conclusion, both in terms of individual and team play. Not only did he have a poor individual performance for much of the NCAA tournament (besides against Nevada), but his team blew what should have been a victory against Ohio State on Saturday. Anderson took quite the elbow from teammate Robert Dozier late in the first half, which left him bleeding from the face, and also seemingly taking him out of the rhythm of the game.

The Memphis sophomore brings a whole lot to the table in terms of playmaking skills for a 65 guard. He is able to play both the point and shooting guard positions, exhibiting outstanding ball handling skills and court vision when he has the ball in his hands. Anderson made some absolutely beautiful passes in the open court against Ohio State, always keeping his head up and finding the open man given the slightest of room to sneak a pass in. His terrific decision making skills are supported by a 2.68/1 assist to turnover ratio, which is better than virtually every point guard prospect in the country not named Mike Conley Jr. The excellent size that he possesses for a guard at 65 or 66 allows him to see over smaller guards, while giving them fits on the defensive end with his athleticism and length when he chooses to do so. The potential is certainly there for the Laurinburg Prep product, but consistency has been the issue that has plagued him throughout his career more so then anything else.

While exhibiting many outstanding physical abilities, it is clear that Antonio still has a whole lot of work to do in other facets of the game. His shot selection is awfully poor, exhibited by his 39.2% FG percentage and 25.5% accuracy from beyond the three point arc. With the ball in his hands, Anderson is noticeably right hand dominant, going away from his left hand at all available costs. He also does not exert consistent effort on the defensive end, despite the fact that he shows flashes of capably being a superb defender when it is all said and done.

It will be interesting to see how Anderson is able to fit in next year when Chicago Simeons Derrick Rose steps foot on campus at Memphis. Rose, Anderson, and Chris Douglas-Roberts will form one of the nations most explosive backcourts, but it is questionable how much Anderson will actually have the ball in his hands. Either way, playing alongside someone of Roses talent can do nothing but benefit Anderson, and fans should expect his scoring numbers to improve from the meager 7.9 points per game that he averaged this past season.
Read full article

Rodger Bohn
@DraftExpress
For some reason, Antonio, who is widely regarded to as a very good scorer, only decided to take one shot in the game. Scoring aside, I was very impressed with his ability to run a team at 6'5. He penetrated with ease and found his teammates for open looks. He will definitely be able to fill in for Darius Washington when needed, or even play along side of him. Don't let this game fool you, the kid can really play and will be a factor next year for Memphis.
Read full article