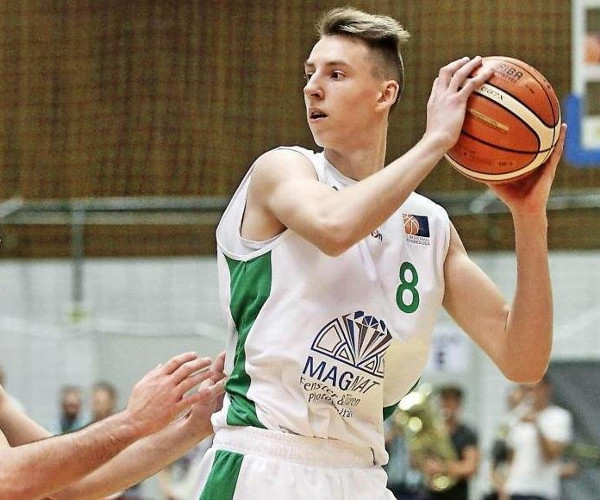 Mike Schmitz
@Mike_Schmitz
Lithuanian small forward Arnoldas Kulboka continues to grow as the 19 year old measured a hair under 6'10 in shoes with a 6'11.25 wingspan and a 206-pound frame here, all improvements on the marks he registered at this same event one year ago.  Kulboka has had a hard time adjusting to this setting coming off a strong performance in his BBL debut to close the season, as his jumper hasn't been falling, he's struggled competing against athletes and dealing with intense ball-pressure.
Read full article

Matt Kamalsky
@MKamalsky
Kulboka, who was on the winning end of Mushidi's best individual performance of the season when he scored 33 points for Germany against Lithuania in the FIBA U18 European Championship held last December, comes in less battle tested than many players here.  Putting up solid numbers averaging 14.6 points, 4.4 rebounds, and 2 assists per game in the German Second Division for Bamberg's second team, Baunach, the fluid, highly skilled scorer will look to bounce back from an uneven showing at U18s as his consistency and toughness will be under the microscope here. His upside as a super-sized wing with athleticism, shooting range and even some shot-creation prowess is undeniable, though, making him one of the most intriguing prospects here at the EuroCamp. He probably would be picked highest if the draft were held today among all those eligible in 2017.
Read full article

Bogdan Karaicic
@bhoops2016
Bogdan Karaicic takes a closer look at Arnoldas Kulboka's 13 point in 22 minute performance against Jena in the German BBL. This was Kulboka's very first game in the first division this season, after spending all season with Bamberg's second team, Baunach, in the second division.

Bamberg, ranked second in the league, won at Jena decisively, with Kulboka contributing 13 points (5-10 FG), 5 rebounds and 2 assists in 22 minutes of action. Kulboka has entered his name in the 2017 NBA Draft and is expected to participate in the adidas EuroCamp in Treviso next month, after which he'll have to decide whether or not to withdraw.

Jonathan Givony
@DraftExpress
Arnoldas Kulboka, 6'9", 18.9 years old, Small Forward, Bamberg, Lithuania
Strengths:
-Super tall. Measured 6'9 in shoes at the 2016 EuroCamp. May still be growing.
-Has a plus-3 wingspan
-Good athlete. Light on his feet. Very agile. Can play above the rim in space. Excels in the open court
-Smooth catch and shoot stroke. Can get very hot with his stroke and knock down a barrage of 3s. Career 38% 3-point shooter according to DX database, on large volume of attempts. Can also make a pull-up
-Has some interesting ball-handling moves and footwork in his repertoire. Can attack closeouts skill-fully at times.
-Has plenty of room to continue to improve, nowhere near maturation.

Weaknesses:
-Has a very narrow frame that may struggle to put on weight. Body hasn't changed much in the past year.
-Still learning how to use his athleticism to create high-percentage shots for himself and others. Struggles to get into the paint in the half-court. Not a brilliant passer
-Poor finisher around the basket, partially due to lack of strength, but also due to propensity for avoiding contact and lack of left hand. Struggles to draw fouls and finish in traffic. Settles for a lot of pull-ups and floaters.
-Very inconsistent from game to game. Was completely invisible for half the tournament, and very impressive in other moments.
-Poor defender at the moment. Struggles to play tough defense without fouling. Lets opponents drive straight through him, not offering enough resistance. Targeted by opposing coaches with set plays
-Very reactive to what's happening on the court. Not a next play guy. Gets down on himself easily. Puts a ton of pressure on himself

Outlook: Kulboka has significant talent and long-term upside at his disposal with his combination of size, athleticism and outside shooting prowess. When he's rolling and making shots, he shows you some flashes of passing, activity defensively, but is very reactive to the way the game is unfolding. Frame will need to fill out significantly to play a real role in the NBA, especially defensively, something that will likely take at least a few years.
Read full article

Getting to Know: Arnoldas Kulboka

Bogdan Karaicic
@bhoops2016
Lithuanian wing Arnoldas Kulboka discusses his strengths and weaknesses at the U18 European Championship, with accompanying video from the tournament.

DraftExpress
@DraftExpress
The other European 1998-born prospect on the initial roster, Arnoldas Kulboka is also certainly worth keeping an eye on. A late bloomer who has intriguing athleticism and creativity on the offensive end for a 6'9 small forward, Kulboka played this season with Bamberg's youth team, Baunach averaging 6.4 points over 15.5 minutes per game in the German 2nd Division. A skilled, explosive player, who impressed at the adidas Next Generation Tournament this season, NBA teams will definitely take an interest in the young Lithuanian here.
Read full article

Strengths:
-Has great size for a wing player at 6'9. Long wingspan (likely a little over 7-feet). Body seems to be developing nicely
-Fluid athlete. Plays above the rim with ease. Threw some some highlight-reel caliber dunks.
-Excellent potential as an outside shooter. Can make shots with feet set or off the dribble, even showed the ability to come off screens.
-Gets his shots off quickly and easily. Soft touch and beautiful follow through. Creates separation from defenders nicely. Just throws the ball in the basket from difficult angles
-Shows some impressive potential as a ball-handler. Big, swooping crossovers
-Creative player with good court vision. Will make some very flashy passes at times.

Weaknesses:
-Body is still a work in progress. Will take him another few years to fill out.
-Still working on becoming a more prolific scorer inside the arc. Very reliant on his jumper. Handle is flashy but needs to get much more compact to be utilized effectively in games.
-Tends to avoid contact at times around the basket. Will need to develop the mentality needed to take advantage of his superior athletic tools
-Lacks a degree of toughness
-Jumper is very pretty, but is still somewhat inconsistent overall in terms of results. Release can be sped up somewhat. Tends to elevate and shoot the ball on the way down at times.
-Not a particularly good defender. Partially a product of lack of strength, but also due to his average fundamentals and intensity level.

Outlook: Lithuanian who elected to sign in Germany this past summer. Has gained almost 15 pounds since arriving in Germany. May have been the breakout performer of the camp from an NBA standpoint. Has tremendous tools and talent with significant upside to continue to improve in all facets. Still in an early stage of his development, as somewhat of a late bloomer. Will need to continue to mature to realize his full potential.
Read full article

Matt Kamalsky
@MKamalsky
-Lithuanian wing Arnoldas Kulboka only played 9 minutes per game at the U18 European Championships this past summer, but did enough in his limited time to earn a spot in our writeup thanks to the significant potential he showed as a tall and athletic shooter. Kulboka moved shortly after the U18s from Lithuania to Germany, where he's now playing in Bamberg.
Read full article

Strengths:
-Has good size for a wing at 6-8
-Skinny, but has a nice frame
-Nice potential as a shooter. Solid form. Career 43% for 3 thus far
-Solid ball-handler. Looks very comfortable creating his own shot, even in small spaces
-Has very good footwork attacking closeouts
-Can play some pick and roll and find the open man off the dribble
-Looks talented. Clearly has some upside to grow into

Weaknesses:
-Frame has a long ways to go until it reaches full maturation
-Not a great decision maker at this stage. Takes tough shots pulling up in the mid-range. Turns the ball over more than you'd like.
-Not strong enough to finish around the basket effectively. Rarely gets all the way to the basket. Tosses up weak floaters inside the paint. Crumbles at the first sign of contact
-Release on jumper is a little slow
-Struggles to defend his position. Lacks strength, but also some toughness. A little bit naïve. Bites on pump-fakes

Outlook: Only played 9 minutes per game at the U18s, but flashed some hints of intriguing things to come in the future. Big wing who can handle and shoot. Raw prospect still at a very early stage of development. Someone to follow to see how he continues to improve down the road.
Read full article