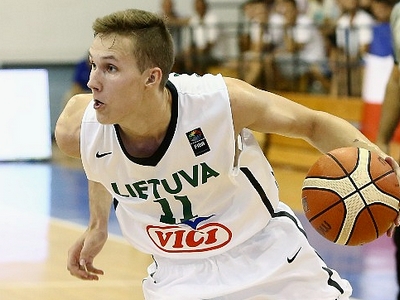 Strengths:
-Very interesting physical profile
-Great size for a wing at 6-8 or possibly 6-9.
-Excellent frame
-Good athlete. Can play above the rim. Strong first step. Smooth and fluid with movements.
-Can create shots for himself and others.
-Good ball-handler. Brings ball up at times, initiates offense
-Smooth and fluid with body control.
-Nice footwork on drives or attacking closeouts. Can execute spin-moves
-Can play pick and roll
-Solid passer. Unselfish. Finds open man, sometimes in impressive fashion
-Intelligent player
-Can post up smaller players
-Shows potential as an outside shooter. Made 38% of 3-pointers in Spain this past season
-Career 80% free throw shooter
-Good rebounder for position
-Competes on defense.
-Has already seen some spot minutes at the ACB level with Vitoria

Weaknesses:
-Not a great outside shooter. Jumper has a bit of a hitch, some wasted motion
-Career 33% 3-point shooter so far
-Has room to improve defensively, especially guarding the wing. Little bit upright in stance. Gets posted up. Bites on fakes.

Outlook: One of the biggest talents to come out of Lithuania in the last few years. Guard skills with forward size. Big enough to play some power forward, but is very versatile and can do different things with the ball. Rights are owned by Vitoria, who loaned him to the Spanish third division last season, where he saw solid playing time. Clear-cut NBA talent.

See our scouting report on Charalampopoulos from the FIBA U19 World Championship in Crete for a detailed breakdown.

Outlook: The tournament's best scorer at nearly 30 points per-40, one of the ten best offensive performances in the history of the tournament. Somehow shockingly came off the bench the entire time, and only played 20 minutes per game. Big combo forward somewhat stuck between positions. Has a lot of intriguing attributes though, and with the NBA's hyper-focus on outside shooting, will absolutely get looks as a niche prospect.

Outlook: Signed a three year contract with mid-level ACB team Obradoiro, which should give him more opportunity to find minutes at the senior level than he would have staying in Real Madrid. Shows potential in different parts of the game, and has been very productive in other settings, particularly the Euroleague ANGT, where Real Madrid won the championship.

Strengths:
-Physically mature wing player. Can bulldoze his way through opponents
-Good ball-handler.
-Can play some pick and roll
-Pushes ball in transition. Always in attack mode
-Strong enough to play the power forward position, which he often does
-Can play with back to the basket a bit
-Has impressive court vision
-Can find the open man. Averaged 8.7 assists per-40 at U18s
-Excellent rebounder for a wing
-Plays with great intensity
-Has very good timing blocking shots and getting passing lanes
-Can make tough shots, just takes way too many of them

Weaknesses:
-Average athlete. Struggles to finish over length
-Game is based mostly on strength and aggressiveness. Relies heavily on overpowering weaker players. What will happen when everyone catches up physically?
-Struggles to play off the ball
-Has a tendency to over-dribble when he is utilized as a point forward
-Shot-selection is very poor
-Shooting mechanics don't inspire great confidence. Shoots a push shot
-Career 28% 3-point shooter, but takes a huge volume of attempts each game regardless
-Career 56% free throw shooter. How much potential does he have to improve his long-range stroke?
-Goes through huge swings or productivity or inefficiency. You never quite know what you're getting with him
-Gets roasted defensively due to lack of lateral quickness. At his best when playing power forward, but not big enough to do that at the highest levels
-Body language is poor at times. Very emotional and reactive

Outlook: Boom or bust guy who is extremely productive in the youth categories. Extremely strong and versatile. Had a triple double at the competition. Some concerns exist about how his game will translate to the senior categories due to the physical superiority he currently enjoys.

Strengths:
-Has good size for a wing at 6-8
-Skinny, but has a nice frame
-Nice potential as a shooter. Solid form. Career 43% for 3 thus far
-Solid ball-handler. Looks very comfortable creating his own shot, even in small spaces
-Has very good footwork attacking closeouts
-Can play some pick and roll and find the open man off the dribble
-Looks talented. Clearly has some upside to grow into

Weaknesses:
-Frame has a long ways to go until it reaches full maturation
-Not a great decision maker at this stage. Takes tough shots pulling up in the mid-range. Turns the ball over more than you'd like.
-Not strong enough to finish around the basket effectively. Rarely gets all the way to the basket. Tosses up weak floaters inside the paint. Crumbles at the first sign of contact
-Release on jumper is a little slow
-Struggles to defend his position. Lacks strength, but also some toughness. A little bit naïve. Bites on pump-fakes

Outlook: Only played 9 minutes per game at the U18s, but flashed some hints of intriguing things to come in the future. Big wing who can handle and shoot. Raw prospect still at a very early stage of development. Someone to follow to see how he continues to improve down the road.

Strengths:
-Has great size for a small forward at around 6-9
-Long arms
-Frame is lanky right now, but is well proportioned and should fill out nicely in time, if he works on it
-Moves like a wing. Fluid
-Has a solid first step, particularly driving left
-Throws the ball in the basket occasionally from outside, leaving some hope he may develop this part of his game in time. 16/45 (35%) in 25 games we have logged
-Shows some potential defensively. Moves feet well on perimeter
-Only 16 years old

Weaknesses:
-Extremely limited offensive player. 6.1 points per-40 at U18s, shooting 21% for 2
-Cannot dribble at all. Only shoots jumpers, and doesn't even do that all that well
-Possesses a long, ugly shooting stroke. Needs time and space to get it off
-Fundamentals on defense aren't great
-Lacks the strength to hold his ground inside the post. Gets backed down.
-Somewhat stuck between positions defensively.

Outlook: A Russian version of Winston Shepard? Big, long combo forward who moves well, but is extremely raw on both ends of the floor. Doesn't turn 17 until later this month. Someone to watch to see if he develops his skill-level at all.
Read Next...