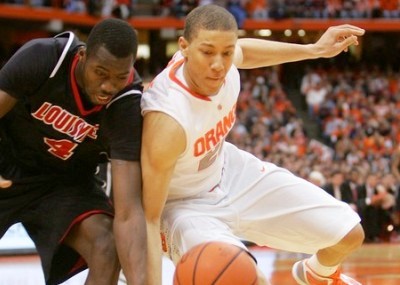 After a solid freshman season as a minor cog in the Orange rotation, Brandon Triche should have ample opportunity to expand his role as a sophomore with Andy Rautins and Wesley Johnson moving on to the NBA. Fluctuating minutes and production were common from game to game for Triche this past season, but it was due more to a talented roster than anything else.

Standing 6'4 with pretty good length and a well-built frame, Triche has decent size for a combo guard, though he leaves much to be desired from an athletic standpoint, not being especially explosive with his first step or his vertical leap. He makes up for this somewhat by playing with a high motor and displaying an excellent basketball IQ, but overcoming athletic shortcomings will always be a concern for Triche.

From a skills standpoint, Triche brought a nice foundation to the table as a freshman, especially when viewed in combination with his know how for putting the skills to use. Seeing plenty of time both on and off the ball in the Syracuse offense, Triche displayed a versatile package of scoring and passing.

Triche's greatest asset at this stage of his development is probably his spot-up jumper, flashing range to the NBA three-point line and showing excellent accuracy spotting up. He moves very well off the ball and does an excellent job being ready in stance for the catch-and-shoot. Triche doesn't fare nearly as well pulling up off the dribble, however, as his accuracy falls off considerably in these situations and he shows problems when contested due to a tendency to bring the ball in front of his chest before going into his motion. That said, he already has all the makings of an excellent spot-up shooter, and it will be interesting to see how his percentages hold up with an expected role expansion this season.

In terms of attacking the basket, Triche does a good job picking his spots, mostly attacking on spot-up drives when he has a good angle on his man, looking best when he has straight lines to the basket. In pure isolation situations, Triche shows a very strong handle and a pretty good command of advanced moves, though his first step is weak and he doesn't elevate very well in the lane either. His finishing ability at the rim is sub-par, though he has no qualms about throwing his body around to get to the free-throw line, while he also uses a right-handed floater often, but his accuracy will need to improve considerably on that over his next three years in school.

Triche gets a lot of his scoring in transition where his first step is less of a concern and he has more opportunities to display his strong ability to read lanes, his excellent body control attacking the basket, and doesn't have to deal with big weakside defenders contesting his shots.

In terms of ball distribution, Triche is an unselfish player who exhibits great court vision, but he doesn't appear to be headed towards a role as a full-time point guard. He gets most of his assists in simple situations, be it hitting open shooters, cutters in the lane, or drive-and-kicks after one or two quick dribbles.

Defensively, Triche shows a very good level of effort and fundamentals, though he seems to be noticeably lacking in lateral quickness, especially against point guards but against shooting guards as well. He does a good job doing the little things, however, namely closing out on shooters and keeping his hands up, really maximizing his ability despite his sub-par athleticism. Triche's lateral quickness concerns are also very much shielded in Syracuse's zone, where there aren't many isolation situations throughout the season, something that could hurt his long-term development here.

Looking forward, Triche appears clearly on the path to becoming an excellent college player, though his long-term potential as an NBA prospect is still very much up in the air depending on his development over the next three years. His spot-up shooting, passing, and high basketball IQ and motor are things that should translate well when the time comes, but how he supplements those things with the rest of his game will likely determine his long-term success. Continuing to work on his floater and pull-up jumper should be among his main priorities, while obviously doing everything to maximize his athletic potential as well.
Read full article