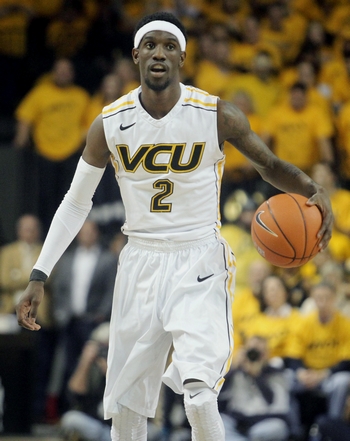 After losing starting point guard Darius Theus to graduation, VCU turned to Briante Weber to step into the leading role last season, seeing his minutes increase from 20.9 per game to 28.9 per game. Weber returns to VCU for his senior year looking to lead the Rams to the NCAA tournament for the fifth straight year, while cementing his status as a NBA draft prospect. Weber will have to sit out the regular season opener due to an off-court incident, but will be a key player for the Rams when he returns.

Even though Weber saw his playing time increase last season, he remained the same high-energy, ball-hawking defending point guard he was when he was on the court for fewer minutes. Although his steals per 40 minutes pace adjusted decreased slightly from 5.0 to 4.5, he remained the national leader in this category among qualified players. Part of the reason Weber was able to play only 20 minutes his sophomore season was foul trouble, but he managed to cut down his fouls from 4.2 to 3.2 per 40 minutes pace adjusted, allowing him to stay on the floor longer.

Weber's defensive ability comes from his unique combination of height, length and quickness for a point guard. At 6'2, 165 pounds with great length and speed, Weber is able to harass his opponent on the defensive end, using his quick hands and feet to pressure the ball handler and deflect passes, which makes it difficult for the opposing offense to flow. He parlayed these skills into the A-10 Defensive Player of the Year award for the second year in a row. He has a high motor to complement his athletic tools, which provides a strong base for his potential as a NBA guard.

While Weber is a defensive star, he needs to improve his scoring ability to show he is capable of not being considered an offensive liability at the NBA level. His physical tools give him potential to be a slashing guard, but he really struggles to score efficiently in the half-court.

Weber uses his speed well both in transition opportunities and half court sets to probe the defense and find openings, but isn't always able to take advantage of these opportunities as he converted just 45% of his field goal attempts inside the paint in the half-court according to Synergy Sports Technology, and 46% in transition situations.

Weber lacks strength in a significant way, as he possesses a narrow frame that makes it difficult for him to convert on the many attempts he creates inside the paint with his terrific quickness. He doesn't have great touch around the basket either, often just throwing up wild attempts inside the paint that don't even draw iron, which is something he'll have to work hard to improve on as he isn't good enough in other areas to compensate for being a sub-50% 2-point shooter his entire career at VCU so far.

His three point shooting needs even more work, as he shot just 24.4% on 41 attempts last season, after hitting 18 of 76 attempts the two seasons prior. Only a handful of guards the past few years have been drafted shooting such a mediocre percentage from beyond the arc.

Weber's poor shooting allows defenses to sag off him, which limits his penetration opportunities and hurts his overall offensive value. He won't need to become a deadly shooter, but starting to show an improved form will help him show he has the potential to be a floor spacer on the offensive end and open up room for himself and his teammates. He's been an excellent free throw shooter his entire career at VCU (career 78%), so perhaps showing some marginal improvement here could help convince scouts there's something to work with down the road.

While Weber struggles as a scorer, he has shown he is a willing and capable passer by finding his teammates when he breaks down the defense with his speed and delivering passes that allow his teammates to take advantage of the open space. He is an extremely unselfish and creative passer, whipping the ball ahead in transition and utilizing both sides of the floor impressively, showing very nice potential in this area. He averaged 5.0 assists per 40 minutes pace adjusted while taking care of the ball, averaging just 2.4 turnovers per 40 minutes pace adjusted. This leads to a pure point rating of 2.45 which ranks fourth among point guards among our top 100 prospects.

Weber has done a great job going from being a player without a single Division I scholarship offer as a high school senior to a legit NBA prospect four years later. He's undoubtedly a late bloomer physically and skill-wise, but must show some improvement on the offensive end in his final season of college basketball. While he will not need to be a go-to offensive player, being able to draw the attention of defenses will make him a more complete player and allow NBA teams to see he can run a unit. Weber has a great mix of physical tools and showing improvement on the offensive end should cement his status as a draft prospect.
Read full article 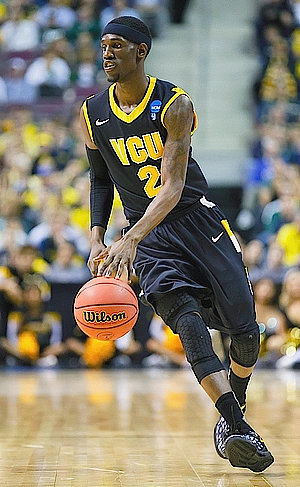 Playing on a VCU team with a deep guard rotation, Briante Weber didn't make a huge statistical jump during his second season with the Rams. With Weber's minutes only seeing a slight increase (from 18.7 to 20.9) the rest of his scoring oriented stats remained relatively the same.

Briante Weber remains an intriguing, albeit unconventional, point guard prospect, with his calling card continuing to be his pesky, high energy defense. Weber has led the nation in steal percentage during both of his collegiate seasons, with his 5.0 steals per 40 minutes pace adjusted the best number in our database last year. He won the A-10's defensive player of the year award last season and set VCU's school record at 98 steals, despite playing just over 20 minutes per game, and he is likely to end his time at VCU as the school's all-time career steals leader, needing only 82 steals to accomplish the feat.

The ability to force turnovers is obviously a big part of Weber's draw. He's equally adept at stripping his man of the ball as he is of playing the passing lanes, blessed with incredibly quick hands and great anticipation skills to go along with his good length and excellent quickness. He's also relentless, constantly in the offensive players' face forcing the issue. Weber does an excellent job of pressuring the ball early in the shot clock, slowing down the opposing point guard from getting into their set offense and frequently forcing them into mistakes in the process.

The constant pressure Weber puts on opposing team's ball handlers is a huge asset, but it does come with a costsomething that is built into VCU's philosophy as how they like to play. At 4.2 personal fouls per 40 minutes pace adjusted Weber is one of the more foul prone guards in our database, something that will increasingly become a problem with the graduation of Darius Theus and Weber's increased role in VCU's back court this season. The pressure can also lead to Weber getting beat if his man is able to get around the pressure, causing his teammates to have to rotate to cover up. Still, Weber's pressure defense is a huge asset to the Rams and one of his calling cards as a prospect.

His aggressive defense also shows up when he's off the ball, as he's very eager to go roam around hunting for steals, especially as he pinches down on bigs who may not be all that comfortable handling the basketball. Again, while the net result is still very much a positive and great boon to VCU's transition offense, it can at times put his teammates in prone positions as they have to rotate to help cover up when Weber comes up empty handed. This is, however, something Weber showed improvement on last year over where he was during his freshman season, as he seemed to have a better handle on how to control his aggression and when to pick his spots.

The same tools and energy that make Weber a good pressure defender also helps him in other facets on the defensive end. He moves his feet well defensively and does a good job using his length to help thwart dribble penetration. He does a good job of recognizing screens, although he could use some more upper body strength to help him fight through pick and rolls. Perhaps more importantly than his physical attributes, his constant effort and attention on this end of the court give coaches a great base to work with in order to make him a great overall defender.

Considering his ability to generate turnovers, it's perhaps no surprise that Weber's most consistent offensive contribution comes from transition opportunities, accounting for over 30% of his offense according to Synergy Sports Technology. Weber is quick to push the ball up the court when he comes up with a turnover or a defensive rebound, using his overall athleticism and quickness with the ball in his hands to take advantage of every opportunity possible and doing a good job of keeping his head up to find his teammates filling a lane.

Outside of that, the rest of his offensive game is very much a work in progress. In many respects, his jump shot took a step back from where it was as a freshman, which itself wasn't all that good of a base. According to Synergy, his efficiency fell in overall jump shots (0.632 points per possession, down from 0.789), catch and shoot (0.545, from 0.786), and off the dribble (0.667, from 0.821). While all of these are on very low sample sizes, as despite the fact that jump shots make up over 60% of Weber's attempts, he only played 20.9 minutes per night and only attempts 4.4 field goal attempts per game. That being said, the tape bears out that Weber has quite a bit of work to do before his jump shot becomes a consistent weapon for him, with a lot of extra motion both in his upper and lower body, particularly when shooting off the dribble.

Weber's athleticism and quickness with the basketball presents some intrigue off the pick and roll, and he shows a real knack for being able to split the double team and get into the lane. He did a better job of playing within himself when he got into the lane this past season, showing more willingness to kick the ball out to his teammates rather than force a shot in the lane like he had his freshman season, which was frequently out of control. His ball-handling could stand to improve, as he has a rather high dribble and struggles to execute many advanced moves with his off hand.

With the Rams having lost Darius Theus to graduation, Briante Weber will be asked to play many more minutes, and much more of a point guard role, than he has during his previous two years at VCU. Weber has a considerable way to go in terms of refinement of his offensive game before he can truly start taking advantage of his athleticism, but his incredible defensive production will keep him on the radar while we wait to see whether the rest of his game can come around.
Read full article