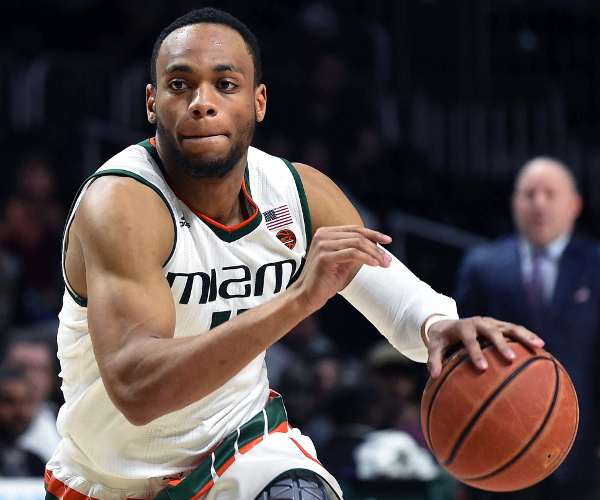 Mike Schmitz
@Mike_Schmitz
Although he played in the Jordan Brand Classic and ended up an RSCI Top-30 recruit, Miami freshman guard Bruce Brown has always flown slightly under the radar relative to many of his peers.

Despite his shredded frame, long arms, high motor, explosive first step, tendency to throw down violent dunks and his likely intentional Russell Westbrook look and demeanor, Brown wasn't a McDonald's All-American or a member of the Nike Hoop Summit team. He was never involved in USA Basketball, nor was he considered much an elite-level freshman coming into his first year at Miami as one of the oldest players in his class.

In part, the 20-year-old Brown was overlooked but he also wasn't the most skilled player on the youth circuit. A physical, hard-playing athlete who also thrived on the gridiron as a safety and wide receiver, Brown, cousin of UConn guard Jalen Adams, had quite a bit of room to improve his skill level and feel for the game in order to be considered a top-flight prospect.

We're now 24 games into his freshman season at Miami, and Brown has made great strides in his offensive game and is arguably the Hurricanes' most impactful player when taking into consideration his stellar two-way play. He's playing on the ball as a lead facilitator for long stretches, has proven he's more than just a slasher out of pick and roll, and is even shooting 37% from three on 65 attempts (91st percentile in catch and shoot efficiency according to Synergy Sports). For reference, in 62 EYBL games from 2013 to 2015 Brown shot only 99 threes at a 27% clip and knocked down only 61% of his free throws. As was the case as a youngster, Brown, who comes from a humble background with ten siblings, is still playing with tremendous energy and physicality on the defensive end while mixing it up on the glass.

Brown has cemented himself as a NBA prospect in the loaded ACC (although how early that will materialize remains to be seen) and has developed into a downhill, attacking combo guard who can facilitate, spot-shoot, defend and rebound. Here's an in-depth look at the areas where Brown has been most valuable for Miami thus far:

With all of that said, Brown still has quite a bit of room to improve offensively, especially when you consider that he's about a year and a half older than many of the top flight guard prospects in his class. His handle needs polish, his jumper is still streaky (especially off the dribble, 3-for-23 so far), he's not the finisher he could be given his tools (48.9% from two), and his decision making could use more work if he hopes to play more on the ball down the road at the NBA level. Here's a quick breakdown of the areas where Brown needs further improvement in order to maximize his potential:

The tough, explosive guard has found a way to think the game at a higher level and shoot it well enough from the perimeter in order to be considered much more than just a specimen who gets by on physical gifts. He can facilitate out of a ball screen, put pressure on the rim when he gets downhill, play above the rim in space, spot shoot at a decent clip, and defend multiple positions while making plays off the ball.

Brown has stepped into his freshman year at Miami with maturity and professionalism and has undoubtedly helped his NBA stock along the way as a tough, defensive-minded guard who can play out of a ball screen, attack the rim and make a shot  a style of guard that's becoming much more heavily sought after in the NBA.