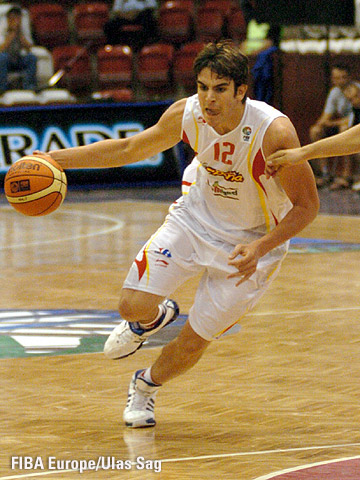 Luis Fernández
@DraftExpress
Carlos Suarez is coming back to life for MMT Estudiantes in this final part of the regular season, after a pretty forgettable campaign. The team is fighting to escape from the relegation zone of the ACB League, and Suarez is contributing with regular production. This past week he had 24 points and 3 rebounds in the loss against DKV Joventut, while delivered 13 points and 6 rebounds in the victory against Cajasol. Suarez is nicely combining his perimeter stroke, where he shows quick mechanics and the ability to come from a cutter and automatically get up for the shot, with his low-post game. As a 6-8 long-armed small forward with experience as an inside player, he feels quite comfortable taking his perimeter match-ups to the low post, showing nice footwork and a decent baby hook. Hes also a very good off-the-ball player, and knows when to cut in order to get open looks or to gain a position near the basket. On the downside, were yet to see him developing a more consistent off-the-dribble game, and he rarely uses his ball-handling skills to beat his opponents. Besides, hes a poor defender, suffering from limited lateral quickness resulting in opposing perimeter players beating him too easily, while he even suffers to properly contest shots or make defensive rotations due his poor athleticism. Suarez wont hear his name called in the draft, but he should become a solid act in Europe.
Read full article

Luis Fernández
@DraftExpress
Carlos Suarez is doing a good job taking advantage of the increased role hes enjoying in MMT Estudiantes since starting SF Hernan Jasen fell injured. This past week he delivered very solid back-to-back performances, although he finished with a sour taste, as both games ended in losses. Against Gran Canaria Grupo Dunas, he had 12 points and 5 rebounds, but really stepped up facing Tau Vitoria, with 20 points, 9 rebounds and 2 assists. Suarez emphasized his best offensive assets: his perimeter stroke, as hes a rather reliable spot-up three-point shooter with fairly quick mechanics (he combined 5/9 in both games), and his low post skills, cashing in off his length and skills (he played power forward when he was younger) against smaller match-ups. Were still missing significant off-the-dribble skills, a department that seriously hurts his potential and development. Hes not able to create his own shot or offense yet unless he takes his man to the low post, which is fine, but probably not enough for a high-class perimeter player. Anyway, hes not a great athlete, so it wouldnt be easy for him to beat his match-ups on a regular basis. However, hes a tough guy, smart, and a serious worker, so we still trust Carlos Suarez to become a very good player in the long run for international basketball.
Read full article

Luis Fernández
@DraftExpress
This small forward led the tournament in rebounds. He was the only Spanish player with some serious experience in the ACB League (the top domestic competition in Europe), and thats something that certainly provides toughness. Hes a highly regarded player in Spain given his intelligence and reliability playing the game as well as his hard-working attitude, but we still miss more offensive game out of him. He still doesnt seem capable of creating his own shot with any consistency. His ball-handling skills are not that good (he has a past as power forward), and his athleticism just decent. Hes more of a complementary player that knocks down his shots with good range when he receives them open, works on the defense and, obviously, in the rebounding department. He has no NBA potential, and we wonder if he has real stardom potential for Europe, although he will surely become an awesome role player, the kind of player every coach loves to have.
Read full article

Luis Fernández
@DraftExpress
Coach Pepu Hernandez surprised everyone by putting Carlos Suarez in the starting lineup. The 18 year old kid had shined in the last two games of the Euroleague's regular season, but those were meaningless games, as Estudiantes had run out their chances to qualify for the top-16 before he was given the green light. But the King's Cup is another story, and it speaks volumes about how satisfied his coach is with Carlos' work and level of performance on the court.

In the end he didn't play much, but enough to show some of his skills, particularly his reliable three point stroke (like Sergio, he converted one of his two attempts), some good passes, and his post-up game, which he wisely uses against smaller defenders, and where he shows nice footwork. He also tried to penetrate, without much success. There wasn't enough time for much more.

On defense, he was paired with Gelabale and Stojic, and still looked a little bit slow, as the Frenchman easily scored when attacking him the only time he tried. He needs to gain explosiveness to fight back against those quicker wings, and to improve his offensive array of weapons, especially to become more effective slashing and to be able to create his own shot.

Few kids this age draw such confidence about his future in Europe: it's clear that Suarez is a blue-chip player. But the concerns about a hypothetical NBA career are the same we expressed in the European Junior Championships reports: he's not quick or explosive enough. He has athleticism for the small forward position, but he's not particularly tall for that position. However, watching him play with the big guys, I feel a little bit more optimistic, and I can no longer rule out him developing into an interesting prospect. We'll have to watch him carefully.
Read full article

Luis Fernández
@DraftExpress
What an outstanding tournament for this kid! There were very few players in Zaragoza as focused and hard-working as the Spaniard, and he was a big reason for his team's success. So in the end, his selection to the all-tournament team came as no surprise, the right reward for his amazing performance.

Carlos is the perfect role player. He is a great defender, especially team-wise: he is one of those guys who seem to be everywhere on court. His activity and good positioning allow him to grab a great amount of rebounds, too. On the offensive end, he took full advantage of playing alongside Sergio Rodríguez. They are teammates in Estudiantes and, as you might supposse, they understand each other very well. Besides, Carlos is particulary good moving without the ball. Suarez has also quite a reliable jumper, up to the three point range. His release is quite fast because he doesn't need a full shooting movement, being able to realease his shot while barely bending his arms. He's the kind of player who scores a lot more points than you notice during the game.

The biggest knock on Carlos is his athleticism. I think he's faster than it seems, but still not fast enough. He lacks explosiveness. He probably will not be able to create his own shot at higher level. Summarizing, I don't see NBA potential in him, although he will probably be very good at European level.
Read full article