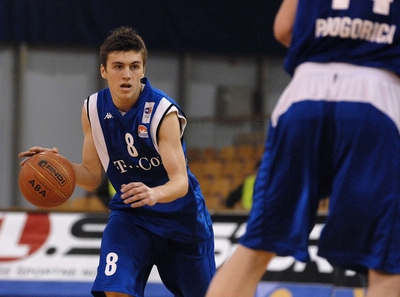 Weve been following Nemanja Gordic since early in the season, intrigued by some of his abilities. His excellent last week, right in the most important setting for Buducnost (the Adriatic League playoffs), is a perfect opportunity to introduce him here in DraftExpress. In the three games of the quarterfinal round, of which the team from Montenegro ended up losing 2-1 against Hemofarm, Gordic averaged 19.7 points and 2.3 rebounds while leading his teams efforts.

A combo guard at this point, Gordic shows a emphasis on his scoring tools over his limited distributing skills, relying on his very nice athleticism to emerge as a very serious slashing threat. Standing 6-4, his body still shows room for development, but he certainly enjoys nice physical tools to play the point.

Gordic is really quick off the dribble, a very difficult player for any opponent to contest. He clearly prefers to drive with his right hand (he needs to improve his left), but if his match-up tries too blatantly to deny him the right side, he wont hesitate to put the ball on the floor with his left and explode towards the basket. His first step is excellent and his footwork decent. However he sometimes loses control of the situation and finds himself in a dead end. When he attacks his opponents, his first and main objective is the basket, where he can use his athleticism to finish high with both hands, and not very often comes up with a kick-out pass. He also loves to run the floor in transition, catching his opponents off guard.

His athletic exuberance is also showcased in his shooting mechanics. Gordic creates very nice separation from his defender, releasing the ball from a pretty high vantage point both in his spot-up and pull-up jumpers. Already pretty effective with his long-range stroke, he should only improve working on his balance in the air and his shot selection, as he sometimes takes off-the-dribble attempts that are just too wild.

3078[c]Photo: ABA League[/c]
On defense, Nemanja doesnt look nearly as effective. He doesnt know how to translate his quickness into lateral mobility, and suffers staying in front of his opponents (indeed he often ends up running behind them). He needs to start bending his knees and not use his hands so much, as he sometimes ends up in foul trouble.

However, the biggest concern about Gordic revolves about his ability to become a real playmaker. Hes not a distributor by any means, and even his assist average of 1.5 per in the Adriatic League looks ridiculously low for a guy who spends a pretty nice amount of minutes playing the point. Its probably a combination of his game philosophy and perhaps poor court vision. One characteristic he does clearly show is that he usually needs to dribble before making any pass, which limits his ability to read situations and react quickly. He also fails to control the game, to really dominate the tempo.

Still, its not that serious when you consider that playing the point involves a long learning curve. At least, he has some excellent gifts to work with, so the potential is there. As a 1988 born, he has the potential and plenty of time to develop and sneak into some future draft. Well be watching closely.

Uros Tripkovic hasnt slowed down much this week, and delivered another excellent scoring effort, netting 26 points on Cibona to seal Partizans ticket to the Adriatic League Final Four. As usual, he relied on his perimeter stroke, on a superb 6/9 clip. This is the third time in two weeks that Uros scores over 20 points in a game.

Nikola Pekovic was anyway the most solid presence for Partizan in that quarterfinal round. In the first game against Cibona he had 19 points, 7 rebounds and 2 blocks, and improved in the decisive road outing for 22 points, 8 rebounds and 3 steals.

Carlos Suarez is coming back to life for MMT Estudiantes in this final part of the regular season, after a pretty forgettable campaign. The team is fighting to escape from the relegation zone of the ACB League, and Suarez is contributing with regular production. This past week he had 24 points and 3 rebounds in the loss against DKV Joventut, while delivered 13 points and 6 rebounds in the victory against Cajasol. Suarez is nicely combining his perimeter stroke, where he shows quick mechanics and the ability to come from a cutter and automatically get up for the shot, with his low-post game. As a 6-8 long-armed small forward with experience as an inside player, he feels quite comfortable taking his perimeter match-ups to the low post, showing nice footwork and a decent baby hook. Hes also a very good off-the-ball player, and knows when to cut in order to get open looks or to gain a position near the basket. On the downside, were yet to see him developing a more consistent off-the-dribble game, and he rarely uses his ball-handling skills to beat his opponents. Besides, hes a poor defender, suffering from limited lateral quickness resulting in opposing perimeter players beating him too easily, while he even suffers to properly contest shots or make defensive rotations due his poor athleticism. Suarez wont hear his name called in the draft, but he should become a solid act in Europe.

Nicolas Batum came up big against Le Mans biggest rival in the French LNB. The league leader paid a visit to Lyon-Villeurbanne, the second placed team in the standings, and got an important victory to solidify first place following the effort of Batum, who ended up with 22 points, 6 rebounds and 2 blocks.

Sam Van Rossom is a Belgium point guard who has emerged this season as an extremely solid presence for the domestic powerhouse Telindus Oostende. This past weekend he scored 21 points in the Belgium league leading Oostende over Dexia Mons-Hainaut, and leads his team in scoring on the season with 11.9 points per game. Standing 6-1, hes a pretty strong, albeit not particularly athletic playmaker. He stands out with his maturity and basketball IQ. The guy plays beyond his years, he knows the game, shows very nice positioning, and hes not afraid of making plays. A solid perimeter shooter, he shows range out to the three point line. He can also attack his opponent, preferably using his right, showing nice ball-handling skills and the ability to net floaters. A solid passer, hes not greatly creative, but can recognize opportunities on the floor. He struggles a bit on defense, where his athletic shortcomings get more exposed (and he doesnt even try that hard to make up for them). Born in 1986 and therefore automatically eligible, hes not draft material, but rather a nice player for the international scene.


State of the Prospect: Whos Not

Jure Lalic continues struggling in Zadar, and his tendency is even to receive less playing time lately. In the quarterfinal series of the Adriatic League against FMP, he averaged 2 points and 0.7 rebounds in less than 6 minutes per game. Lalic hasnt shown much development in the past seasons. Hes still a defensive liability, not particularly solid in the low post and pretty much lost outside of the paint. His lack of quickness and general athleticism seriously hurts his defensive mobility, suffering against big men who like to step outside or in pick and roll situations, while he doesnt look like the smartest guy around to make up for it with anticipation and ability to read the floor. Offensively hes more useful, primarily a low-post guy with decent moves down low, but a bit predictable since he almost always looks for the right-handed hook. He can also shoot the spot-up jumper with range out to the three-point line, and average accuracy. Still we miss some passing game, especially from the low post. Anyway, his poor season and limited potential basically put him out of the draft picture.
Read Next...