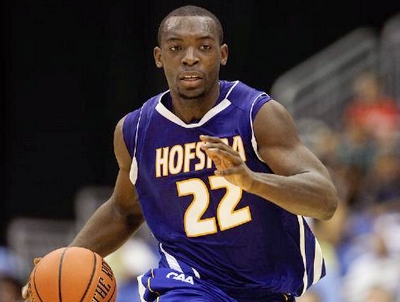 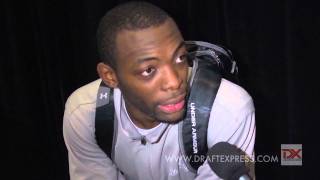 Joey Whelan
@DraftExpress
Perhaps it's only appropriate that Charles Jenkins' latest and perhaps greatest performance  a pair of buzzer beaters in an overtime win over William & Mary last Monday  was recorded on a home video camera before going viral to the tune of over 30,000 views on YouTube in a week.

A similar effort from Jimmer Fredette, Kemba Walker or any of the other elite scorers in the country would have yielded a horde of on-air praise, analysis and highlight packages. But Jenkins isn't privy to such treatment playing at Hofstra University. The tiny school is tucked away on Long Island, just outside the Mecca of basketball, much as the Pride's star player is just outside the national conscious.

He really is what college athletics is all about and I do wish he got more recognition, not only for what he does with the basketball, but also he's just an unbelievable kid, says Mo Cassara, Hofstra's first-year head coach. He takes it in stride, he's not out there looking for extra credit. He just wants to win games.

If winning games is the only concern for the 6-3 senior guard, it's been a successful final season at the college level for the scoring dynamo. His team (12-4 in the Colonial Athletic Association) is in a three-way tie for second place with perennial conference powers VCU and Old Dominion. But unlike the Rams and Monarchs, or even conference leader George Mason, the Pride feature the kind of weapon that has proven to be nearly impossible to scheme against. Not only does Jenkins rank fourth in the nation in scoring at 23.5 points, but his nearly five assists per game leads the CAA, making him one of two players at the Division 1 level to lead his conference in both categories.

It's that second number that may play the biggest role in Jenkins' aspirations of playing in the NBA, as his size will certainly dictate that he spend a good deal of his time filling the role of playmaker rather than go-to scoring option.

I have a lot of different sides of my game that people haven't seen, says Jenkins. As far as what I'm doing at Hofstra, it's definitely earning me recognition and that's something I want to continue to do. My scoring has opened a lot of eyes for people who didn't know I was capable of these things. It's a way for me to get my foot in the door and once there, a lot of other parts of my games will be exposed.

I do think he can play the point because he has great strength and he can pass the ball very well, adds Cassara. I think those things are really going to help him transition to that position.

But until Jenkins begins the whirlwind of individual workouts and camps following his senior season, his prodigious scoring pace will remain his single most impressive asset.

His nearly 2,500 career points  he's the active leader in the NCAA  is the mark that garners the most attention from fans and casual observers, but it is the versatility and efficiency in which he gets his offense that draws the intrigue of pro scouts. According to data from Synergy Sports Technology, Jenkins ranks as the second most efficient isolation threat in the NCAA (after Andrew Goudelock), scoring on over 50% of his attempts when going one on one (minimum 50 possessions). He also ranks in the top-10 in pick and roll situations and in the top-25 as a catch and shoot threat.

Amongst NCAA prospects classified as point guards in the DraftExpress database, Jenkins currently trails only Kyrie Irving (who played just 8 games this season) in both True Shooting Percentage, and Effective Field Goal Percentage. This speaks not only to the tremendous shooter that Jenkins has developed into over the course of his career, but also the impressive shot selection he has shown this season despite the need his team has for him to score.

A lot of times when coach tells me I need to take this many shots a game, I try to simplify it and put up shots where I'm most comfortable, he says.

Of course there have been just as many nights where the Pride coaching staff desperately wishes their star guard would put up even more shots.

Without question, there have been games where I'm almost begging him to shoot the ball, Cassara says. He's willing to do everything the right way. I firmly believe if he shot the ball 20 times a game he would lead the country in scoring.

That is where Jenkins truly sets himself apart from the other elite scorers at the Division 1 level  the sheer volume of shots. While players like Fredette, Walker, Providence star Marshon Brooks and even Charleston's Andrew Goudelock are attempting in the realm of 18 to 19 shots per game, the Hofstra senior has managed his eye popping scoring numbers on just 14.5 attempts. In fact, in 28 games this season, Jenkins has taken 20 shots only three times, and two of those games went to overtime.

Despite all of this however  factors that clearly point towards an individual who will try to make a name for himself by scoring at the next level  Jenkins has a firm understanding of his game and what will be asked of him at the pro level.

One thing that separates me from a lot of other guys is I don't force things, he says. I know I'm not going to get there and finish over a guy like Dwight Howard, but I have a pull up jump shot that I can rely on and I'm a great passer which a lot of people don't really know. People see my scoring numbers and that's really all they see, but I'm smart enough to know the ways I'm going to score there.

In the end maybe it is best that talk of Jenkins has been confined to YouTube clips and internet chat rooms. After all, he is college basketball's best kept secret.
Read full article 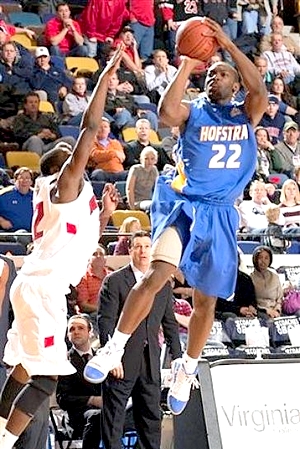 Hofstra guard Charles Jenkins established himself as one of the nation's best scoring guards as a junior, averaging 20.6 points per game on his way towards being named the Colonial Athletic Association Player of the Year. Though Hofstra has struggled early in 2010, Jenkins has continued to excel, including a 24-point, 4-assist, and 3-steal performance against North Carolina and a 27-point outing against Western Kentucky.

At 6'3, Jenkins is undersized for a shooting guard, but he has above average length and solid athleticism to compensate. While he is not overly explosive around the basket, he is very strong and has good quickness, both in the open court and off of the dribble.

Jenkins improved his offensive efficiency across the board as a senior to the tune of 24.9 points per 40 minutes pace adjusted on 60% shooting. He is an elite scorer from beyond the arc where he is currently shooting 43.8% on 3.2 attempts per game and where he shot an impressive 40.9% as a junior. Regardless of whether or not he can maintain his high shooting numbers this season, Jenkins shows consistent mechanics, a quick release, and terrific touch, which suggests that he will continue to be successful at the next level.

Jenkins is shooting a blistering 64.8% from inside of the arc while displaying a versatile scoring arsenal. His mid-range game is a major weapon, and he has improved his ball handling abilities significantly and is an excellent shot creator at this level. He looks more comfortable pulling up off of the dribble, but he is still at his best utilizing his quick first step and strength to get to the basket. He shows excellent body control and aggressiveness around the rim, as well, but lacks the raw explosiveness needed to go up and finish through traffic at times.

Though Jenkins is shooting the ball very well inside of the arc this season, he struggled as last year to the tune of an unremarkable 45.6%. Despite his strength and quickness, his lack of explosiveness continues to limit his ability to finish against big and athletic frontcourts. His aggressiveness sometimes results in tunnel vision, as well, and many of his 3.4 turnovers per 40 minutes pace adjusted are the result of over-ambitious forays into the paint. We must take into account the team he plays for, though, as besides Jenkins, they don't have many scoring options, making it easier for opposing defenses to key in on him.

Also of concern is Jenkins's position at the next level. Jenkins has solid court vision, but he is not a point guard at this stage. Though he is an unselfish player, he still looks for his own shot first and foremost and he rarely is asked to run the offense. This is not to say that a transition to the point guard position is impossible, but it is far more likely that Jenkins remains an undersized scoring guard at the next level.

Size will continue to be an issue for Jenkins on defense, as well, but his energy level will help him to adapt. Jenkins is a physical defender, always willing to scrap. He plays with solid energy, closing out on perimeter shooters and always attempting to disrupt shots, even if his man gets by him. Furthermore, his lateral quickness looks to be above average and, while he will not be a defensive stopper, he will not be a liability, either.

Charles Jenkins has the scoring instincts and overall talent to play in the NBA, even if he's surely not a lock to be drafted. He could find a niche, however, as an off-the-bench scorer such as Toney Douglas or Marcus Thornton. After performing well in games against North Carolina, Western Kentucky, and Nebraska, he must continue to score efficiently in conference play, while continuing to play unselfishly and aggressively on both ends of the floor. At the end of the day, he'll need to catch some breaks and fall into the right situation to make a team and find a role at the NBA level, as there have been many talented players in his mold who weren't quite so fortunate in the past. Even if the NBA is not in his immediate future, there are many teams overseas that could use his talents, and he could still continue to improve his cause playing in Europe or the D-League.
Read full article