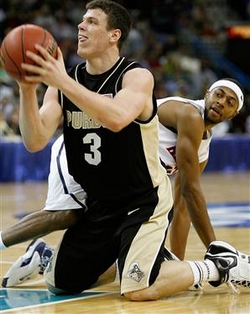 Joey Whelan
@DraftExpress
If youve never heard of a 6-3 stereotypical Indiana basketball product by the name of Chris Kramer, dont feel bad. Most people havent. The freshman combo guard doesnt shoot too often, doesnt get to the free throw line too often, doesnt create his own shot all that much, and rarely is responsible for highlight reel plays. He was easy not to notice in his debut season at Purdue, although that is most likely going to change over the next year or two, especially now that Carl Landry and David Teague have graduated and moved on to professional basketball.

The first thing that stands out about Kramer when watching him on tape is his outstanding toughness. You regularly see him sticking his nose in for offensive rebounds, diving on the floor for loose balls, drawing charges and generally playing the game with reckless abandon. Hes not afraid to take big shots (as his impressive 14 and 16 point outings in the NCAA tournament would indicate), and he doesnt back down from anyoneas we could see from the way he got right into 69 D.J. Whites face after the two got tangled up on one possession. Some might remember a certain play he made in the NCAA tournament against Arizona (pictured), going down to the floor to collect a loose ball, realizing that the shot-clock was running down, and calmly knocking down a 17-foot shot from his knees.

Offensively, Kramer seems to show a great deal of potential in his outside stroke, even though he only hit thirteen 3-pointers in his freshman year. He has fundamentally sound mechanics and a high arching shot, even if he could still stand to improve the quickness of his release. He can shoot the ball both from static situations or pulling up off the dribble, although his mechanics here arent perfectly fluid. Hes not an incredibly explosive player, but hes certainly quick (and surely aggressive) enough to get to the rim at the collegiate level, even though he often lacks a little bit of oomph to finish strong once hes there, and will at times get his shot blocked.

Defensively, Kramer is very solid. He ranks as one of the top ball-thieves in the country on a per-minute basis, a testament to his tough, in-your-face style of play, as well as his awesome instincts sniffing out the passing lanes. He is capable of putting excellent pressure on ball-handlers, and is usually in charge of guarding the oppositions top perimeter threat last year. He is very committed to locking down his man, but at times when matched up with quicker guards than him, his average wingspan and lateral quickness get exposed to a certain degree.

As a college player, there is a lot to like about Kramer. As an NBA prospect, though, there are still a lot more questions than we currently have answers for. Most importantly are positional concerns. At 6-3, he seems to show glimpses of potential to play the point guard spot, but nothing quite consistent yet. There are also some questions about his scoring abilitywhether hell be able to create his own shot on a regular basis. He has plenty of time to answer those questions, and he seems to have landed at Purdue at the perfect time, as the program is clearly on the rise these days.
Read full article