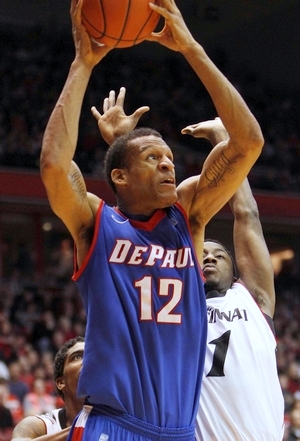 After winning Big East rookie of the year honors during his freshman season where he posted 14.3 points and 5.0 rebounds per game, Cleveland Melvin upped his per-game averaged to 17.5 points and 7.4 rebounds per game during his sophomore year, seeing extended playing time as he and fellow sophomore Brandon Young tried to turn around the long struggling DePaul program.

They had some success in doing so at the beginning of the season, as DePaul started the season off 10-4 for their best start in over a decade. The wins were largely against a very weak non-conference schedule, however, and the Blue Demons limped down the stretch on a 2-15 skid once conference play began, losing six Big East games they were either leading or tied at halftime.

Despite his individual scoring increase, Melvin struggled at times to shoulder such a heavy offensive burden. His true shooting percentage dropped substantially, from 54% his freshman season to 49% his sophomore year, which would be in the bottom 10 power forwards in our database. Melvin attempted to extend his range out to the collegiate three point line, connecting on only 22.9% of his over 2.3 attempts per game from beyond the arc. That inefficiency, combined with Melvin not getting to the line all that frequently  his 28% free throw rate ranks towards the bottom of our database for power forward prospects  created a fairly inefficient player, even considering the high burden he was asked to shoulder on the offensive end of the court.

Melvin is perhaps at his best in transition, where he does a good job running the floor and filling the lane on the fast break in DePaul's relatively uptempo offense. While Melvin appears to have only average explosive ability when jumping from a standstill he seems much more explosive when he gets a running start and does a good job finishing on the break.

In the half-court, Melvin has some tools but has yet to develop a go-to move. He moves well off the ball, doing a good job of finding seams and gaps in a defense. The amount of offense he created for himself in post-up situations fell substantially from his freshman season to his sophomore season. It was a fairly big portion of his offense his freshman year, at 19.4% of his offense according to Synergy Sports Technology, but that fell to only 11% his sophomore season and he was inefficient in these situations, with his 0.627 points per possession well below average. He has good touch on a right handed hook shot that he likes to use, but he can easily be dislodged by defenders and struggles to finish through contact. He also doesn't make use of his left hand, settling for turnaround jump shots when he tries to make a move over his right shoulder. Expanding his post game by developing a hook with his left hand and some counter moves would help make him less predictable and more effective in the post.

While Melvin shows some potential with his jumper, with decent touch out to mid-range, he is very inconsistent with his footwork, balance, hand placement and release point, and struggles overall as a jump shooter. This becomes even more obvious the further he gets from the hoop and when he shoots off the dribble, something which takes up far too many of his attempts considering how inefficient he is, although this is partly due to Melvin being asked to shoulder a higher offensive burden than he should because of DePaul's overall lack of talent.

While Melvin is relatively quick for a big man, he doesn't have the consistent jump shot or ball handling skills to really take advantage of that as a face-up threat. His ball handling is usually limited to one or two quick dribbles to setup a largely inefficient pull-up jump shot. If Melvin is able to increase his consistency with his jump shot and substantially improve his comfort handling the basketball he might have some untapped potential as a face-up threat.

On the defensive side of the ball, the 6'8" Melvin has enough length to contest shots in the post, and he does a fairly good job of playing defense early in the shot clock and working to deny position early. He lacks some lower body strength to continue to deny position, however, and adding weight would help him immensely if he hopes to defend against the stronger, more refined power forwards he would see at the next level.

On the perimeter, Melvin doesn't change direction all that well, and can struggle at times defending the pick and roll. This problem is exacerbated by not having the greatest awareness at times, as Melvin will regularly try to pick his man up on switches well beyond the three point line, where he doesn't have the foot speed to stay in front of the quicker guard. His overall awareness and recognition on this end of the court leave something to be desired.

His need to improve his lower body strength is evident on the defensive glass as well, where his 5.6 defensive rebounds per 40 minutes pace adjusted is in the bottom third of power forward prospects in our database, and an even worse number considering DePaul was one of the worst defensive rebounding teams in the country. He doesn't appear to be all that instinctive of a defensive rebounder, not showing great tracking ability or pursuit to recover.

As the focal point of the DePaul offense with Brandon Young, Cleveland Melvin is put in a position where he can put up big time numbers, but perhaps in a position that doesn't necessarily fit his strengths, and as such his weaknesses become even more pronounced. If Melvin is able to show some consistency in his jump shot and add a little bit of weight, and if DePaul is able to play competitive basketball in the Big East, Cleveland Melvin could improve his standing as a prospect.
Read full article