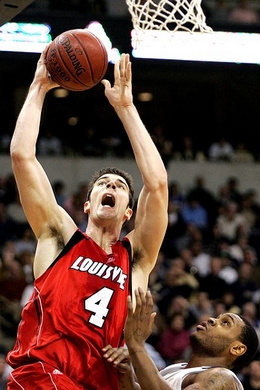 Jonathan Givony
@DraftExpress
David Padgett put on a passing clinic, rebounding from two underwhelming performances to show NBA executives in attendance just what he can bring to the table as an extremely heady high-post center who makes everyone around him better. He finally played a bit more aggressively looking for ways to make his presence felt offensively, not just looking to pass the ball unselfishly on every possession like he did previously. He showed nice footwork in the post to go along with his crafty head-fakes and ability to finish with either hand. He often lacks the athleticism to finish many of the moves he creates for himself, but hopefully he will be able to improve on that as his body gets healthier. Hes a really interesting player who would be well served to develop a deadly jump-shot teams need to respect from 16 to 18 feet.
Read full article

Joey Whelan
@DraftExpress
Two games into his senior season, David Padgett suffered another in a long line of knee injuries, this time breaking his knee cap, which many believed would be the end to his season and his college career. As he has done in the past, though, Padgett recovered, and defied the odds to come back just a month and a half later, allowing him to play a solid 26 games on the season. His many knee injuries certainly havent helped his athleticism, as hes not a very quick or explosive player, but he is both mobile and coordinated, while having enough overall athleticism to get by, especially at his size.

Despite shooting 60% from the field last season, Padgett somehow found a way to increase his efficiency from the floor even further, shooting 67% this season on slightly more scoring output. When he was out early in the year, Louisville wasnt really living up to expectations, but once Padgett came back and quickly got re-adjusted to the game, things turned around, and his highly efficient post game and superb basketball IQ certainly had a lot to do with that.

In the post, Padgett has a very large array of moves, and has for quite some time. His go-to move is still his right-handed hook shot, which he can convert with in a variety of ways, but he mixes in dropsteps, turnaround jumpers, up-and-unders, and other moves as well. One of the things Padgett is best with is faking a spin off one shoulder, selling it very well, and then turning back off his other shoulder, putting up a hook shot, which hes capable of doing with either hand. Padgett has always used an extensive series of fakes to get off his moves, but hes been more decisive with them this year, and quicker with his execution in general, which has certainly helped his efficiency, and is a critical stride he needed to make for his game to convert to the next level. Padgetts post sense is still outstanding, as he takes what the defense gives him incredibly well and rarely forces ill-advised shots, opting to reset the possession if he doesnt like whats there. Padgett has had problems scoring over longer, more athletic defenders in the past, which is something hes sure to see more of at the next level, and while he definitely still doesnt look completely comfortable in these situations, he had very efficient games in his matchups against Roy Hibbert and Hasheem Thabeet this season, scoring 18, 12, and 12 in the three games against them, all above his season average, while shooting over 60% in all of them. While Padgetts athleticism is definitely not ideal, his excellent coordination, mobility, and footwork help make up for that in the post, and he does show the athleticism to pull off moves such as drop-stepping from one side of the paint to finish with a reverse lay-up on the other side of the rim.

An area we suggested Padgett needed to improve on in our previous progress report of him was his mid-range jumper, which he rarely goes to, even though he shows good form and is fairly successful with it when he uses it. His 82% free-throw shooting in his past two seasons definitely left us encouraged about his potential there, though he inexplicably dropped to 66% from the line this year, which is puzzling to say the least. Regardless, its tough to fault someone for not showing a staple of their game more consistently when theyre as efficient as Padgett is, and this is something hell just need to adjust with at the next level, as hell definitely need to be more reliant on his mid-range jumper if he plays in the NBA.

As for the rest of his offense, you cant understate Padgetts ability to do the little things and how he applies his basketball IQ in all areas of the game. Lousiville ran a lot of their offense through Padgett in the high-post, as he shows good passing ability, hitting cutters and shooters alike. Even many of his turnovers were actually passes that went off the hands of his teammates. Hes also an excellent cutter without the ball, specifically in pick-and-rolls, where he reads the defense very well. Its also quite the common occasion to see Padgett moving around the perimeter setting screens, and directing his teammates to their spots on the floor.

On the defensive end, Padgetts great basketball IQ stands out as well, as he plays a very fundamentally sound game while showing great awareness, always making the right rotations. These rotations in combination with his size and timing allow him to block some shots, but hes not very dynamic here due to athletic limitations. In man-to-man defense in the post, Padgett shows great footwork and always keeps his hands up, forcing his man into tough shots, while also doing a good job not getting beat laterally. He can be pushed around by players with a strength advantage and shot over by players with a length and athleticism advantage, but he still makes them work for it. As for the rest of his defense, its clear that the multiple injuries in his career have taken a toll on him physically, as he really struggles defending the pick-and-roll and closing out on shooters, just not having the quickness to consistently make the plays. While he isnt forced to defend face-up players on the perimeter often, his lateral quickness there is also a concern. Padgetts rebounding is also a concern, as despite his size, hes never really excelled on the boards, especially on the defensive end. He did excel on the offensive glass last year, but hes fallen off there as well, and this year didnt even manage 5 rebounds per game total, though he did play 23.5 minutes per game. Of all centers in our database, Padgett ranks fifth from last in rebounds per 40 minutes pace adjusted.

Padgett is someone who has a good chance of attending the Portsmouth pre-draft camp, and if not that, he should get into the Orlando pre-draft camp as well. Hes not a lock to get drafted, and any chance of that will depend on how NBA teams feel about him after putting him through extensive physical examinations. Regardless, with his incredible feel for the game and high basketball IQ, he should get plenty of chances to make an NBA team, even with some of his limitations. If not, he should have a very successful career overseas, as long as he can manage to stay healthy.
Read full article

Joey Whelan
@DraftExpress
David Padgett has put together a solid three seasons at the college level thus far, his first for Kansas and the second two for Louisville. Because he sat out a year after transferring to Louisville, the senior will be 23 years old when he graduates in June. Padgett, hampered by various knee injuries throughout his young career, isnt the most athletic player, but he brings size, skills, and a great understanding of the game to the table. One of the most encouraging things to note about Padgett is that in each of his three seasons, his assist to turnover ratio, FG%, FT%, and points per field goal attempted have steadily increased, to the point where hes now one of the most efficient players in the NCAA.

Padgetts offensive game is almost entirely based within five feet of the basket, where he relies on post moves and easy lay-ups off cuts and offensive rebounds to get most of his points. His post game has a nice repertoire of moves, including a hook shot with either hand, a series of fakes with an up-and-under move, and excellent footwork and post awareness. He uses fakes and spins extremely well to create space against his defender, protects the ball nicely, and almost always puts up a good shot attempt. He recognizes double teams and knows when to pass out, rarely committing unforced turnovers. His go-to move would be his right-handed hook shot, which hell hit spinning off his man, going across the lane, or by just going over his man. Against the vast majority of college competition, Padgett is extremely efficient near the basket.

One of the biggest problems with Padgett comes when he faces bigger, more athletic competition, such as Georgetowns Roy Hibbert or Connecticuts Hasheem Thabeet, both players with NBA tools. Padgett has much less success against these types of players, having to adjust his shots when trying to go over them and getting things down with much less ease in the post. His athleticism is a major concern when looking at the NBA, as is his general slow demeanor going through his post moves. To Padgetts credit, while he clearly looks overmatched at times, he still will manage to use his craftiness to generate baskets even against tough defenders.

Padgett also gets a lot of his points by cutting to the basket or getting in position for offensive rebounds, mostly due to his outstanding court awareness. He reads defenses very well, and does a good job getting to open space in good position near the basket, where he finishes with good touch around the rim. Padgett doesnt show much in terms of a perimeter game, which is extremely strange given his remarkable 82.3% shooting from the free-throw line for a big man. He occasionally will put up a spot-up jumper from the 10-15 foot range, but doesnt go to it nearly enough, something hell really need to work on if he wants to play in the NBA, as a mid-range jumper would need to be a staple of his game.

Defensively, Padgett is very attentive with team defense and shows very good footwork and understanding defending man-to-man in the post, also putting in consistent effort fighting his man and contesting shots. While hes a very good offensive rebounder, Padgett doesnt bring the same level of play to the table on the defensive end. In terms of perimeter defense, Padgetts lateral quickness is sub-par, something that will hurt his chances of playing power forward in the NBA.

Padgett is an extremely efficient college player that could probably do a lot more at this level than hes asked to (he only averaged 9.5 points per game in 24.5 minutes this past season, on 60% shooting), but its tough to say whether his strengths will translate to the next level. His post game will be much tougher to use in the NBA, but his cutting, offensive rebounding, mid-range jumper, and general intelligence are things that he could be effective with in the NBA. There are some doubts surrounding him, though, including his upside as a 23-year-old draftee and his history of knee problems, so its no sure thing that hell be drafted. Still, with a good, injury-free season and a good showing in pre-draft camps and/or workouts, Padgett could definitely see himself drafted in the second round. If not, he should have a long, productive career overseas.
Read full article