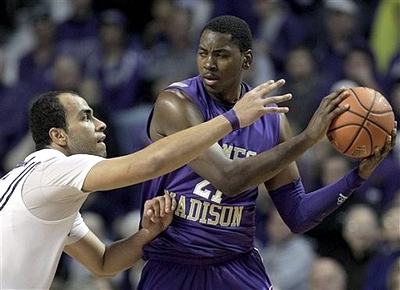 Denzel Bowles made a tremendous impact at James Madison during the 2009-2010 season following a transfer from Texas A&M, averaging over twenty points per game and establishing himself as a force in the paint in the Colonial Athletic Association. And while Bowles has had a similar senior season in 2010-2011 and showed many of the characteristics that make him an intriguing prospect, he hasn't made strides in the key areas where we noted that he struggled last season, most notably with his questionable motor, conditioning level and defensive ability.

As we mentioned before, Bowles has the size and talent to be able to produce at the mid-major level without always having to always give maximum effort. He's able to use his body to establish position in the basket area against smaller, less physically gifted players, and his outstanding hands, footwork, and touch help him finish and contribute to his impressive 58% shooting from the field.

Bowles plays like more of a traditional big man and seems to have a pretty good handle on the fact that he's most productive offensively if he's on the block or getting into the paint. Over 50% of his possessions have come in the post this season, and he's been pretty efficient, scoring .92 points per possession. This could be much better, however, if he didn't always insist on putting the ball on the floor after catching it in the post. We noted before the season that this led to him being very turnover-prone as a junior, and we saw much of the same when evaluating him this season.

He did show a bit more of his shooting ability in his senior season, attempting twice as many jumpers as he did as a junior, and connecting on a solid 48% of those attempts. His range doesn't look to extend past fifteen feet or so, but again, it's nice to see him knowing his limitations here and not trying to be somebody he's not. His ability to step outside of the paint and make a mid-range jumper should help him regardless of where he ends up playing professionally. Generally speaking, he seems to have a higher skill-level than you typically see from players his size, particularly in mid-major conferences.

On the defensive end, Bowles didn't show much this season to inspire much confidence in his potential to guard his position at the NBA level. His size makes him a presence in the paint in the CAA, but his fundamentals are poor, he doesn't move very well laterally, and his motor and toughness on this end are both inconsistent. Focusing more on this end and becoming a beast on the glass would really serve him well going forward, as he isn't talented enough offensively to overlook significant question marks about his defense.

Overall, Bowles senior season didn't show us much more than what we already knew about him. It's rare to find talented big men in his mold at the mid-major level, and he's a player who could still do quite a bit for his draft stock over the next few months as scouts get to see him matched up against stronger competition. He'll likely be at Portsmouth and have opportunities to showcase his game in workouts, and although his talent and skill level may impress some NBA decision-makers, perhaps the biggest thing for Bowles will be getting in shape and playing with consistent energy. Being only 21 years old, teams could hope that its only a matter of maturing and becoming more serious about his craft, something that they'll be able to learn more about during the pre-draft process.
Read full article

Bowles's dominance last season was impressive, but if he can improve his conditioning and play harder defensively, he could raise his stock quite a bit heading into next summer. If Bowles can make some strides in those areas and play James Madison to the top of the CAA, he could generate some nice buzz.
Read full article