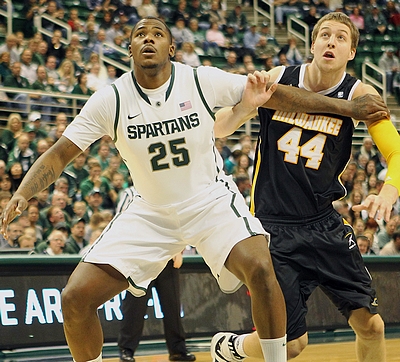 Being called upon as the first big man off the bench for Michigan State last season after two years in a bit role, junior Derrick Nix had some nice moments as a regular in the middle of Tom Izzo's rotation. The bruising big man offered toughness in the paint and a wide-body defensively playing alongside do-everything senior Draymond Green. With Green out of the picture, Nix will be called upon to step up his game on the court and his leadership off it. Getting off to a rocky start this offseason, Nix was arrested for marijuana possession in early April, but has gone above and beyond his sentenced community service to atone for the incident. Regardless of his transgressions, the rising senior has a golden opportunity to showcase his talents this fall.

The first thing scouts will note when evaluating Nix this season will be his weight. Having shed more than a few pounds since tipping the scales near 320 as a freshman, Nix's conditioning, should not be the limiting factor on his senior year that it was early in his career. He has more room to improve his body and still lacks great explosiveness and speed, but has become noticeably more mobile as his weight has treaded closer to 260. Ultimately, the Michigan native's ability to stay on the floor and play at a high level in extensive minutes will be key to his and his team's success this season.

Nix's importance this season goes beyond being the only rising senior from last year's team. On the offensive end, Nix used just as many possessions per game in the post last season (4.1, half his possessions) as Draymond Green, seeing touches one-on-one on the block regularly when he was on the floor. Unless Adreian Payne shows significant progress on the offensive end, it seems likely that Nix will see his post usage expand significantly as one of the only Spartans well-equipped to battle in the paint offensively on a nightly basis, giving him a chance to build on the 8.1 points in 19 minutes per-game he averaged last season.

Based on what he's shown in his career to this point, Nix has a number of tools that should serve him well as his role expands. First and foremost, his physical strength allows him to establish deep position on the block and bully his way to the rim once he receives the ball. He also does a nice job moving the ball out of the post, showing good vision and a willingness to find the open man. His post repertoire may not be glamorous, and is rooted in his ability to get two feet in the paint and get the ball on the rim, but it is effective as he shot 56% from the field last season.

Nix's ability to become a more consistent post scorer will be significant because he has not shown the ability to score away from the rim at this point in his career. Despite how well he shot on the block last season, Nix struggled against longer defenders at times and took some wild shots off of counter-moves. If he can develop a comfort level with his left hand and be a bit more decisive, he has the opportunity to be ever more efficient with the additional touches he'll see this year.

Away from the rim, Nix attempted just three jump shots last season, shot 58% at the line, and only flashed the ability to put the ball on the floor and score in limited doses. If he can become a bigger threat from the midrange, he could have a veritable breakout year, as he already has shown the ability to finish at a high level.

Defensively, Nix can hold his own against virtually any low block scorer in the country. He has a wide body, a low center of gravity, and competes on every possession. He lacks great lateral speed, but he shows very good anticipation, will take contact right into the chest, and isn't afraid to step out on the perimeter to contest shots. If Nix can make a bigger impact on the glass, where he averaged a meager 4.6 defensive rebounds per-40 minutes pace adjusted last season, and show quicker feet defending dribble drives from the midrange, he could have a terrific year on this end of the floor.

Derrick Nix may not have written much of his NBA resume at this point, and certainly doesn't have prototypical size, athleticism, or rebounding ability for the center position at the next level, but the former top-100 recruit has some promising tools. If he can become a bigger factor on the glass on both ends, improve his offensive skill level, keep his weight down, and take advantage of his opportunity to shine this year, he could emerge as one of the top seniors in the Big Ten this season, and a bona fide NBA prospect.
Read full article