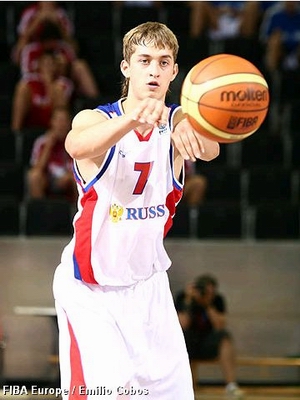 DraftExpress
@DraftExpress
Although he did a good job organizing his teams offense (he led all players with 6.1 assists per game), at this point you come to expect more than 4.6 points per game on very bad percentages (28% 2FGs, 20% 3FGs). Furthermore he only shot a total of 3 free throws over 8 games. Summarizing him briefly, hes still a decent athlete with good quickness and court awareness, a solid ball handler who can easily get by his match-up off the dribbles. Defensively he also shows good intensity.

Khvostov is another very talented Russian player whos missing that little something extra to take the next step in his development. A lot will depend on how much his shooting advances to make an important quality jump at the senior level. Possibilities for him to work on a bright future in Europe, but over the years he has lost his condition as NBA prospect.
Read full article

Luis Fernández
@DraftExpress
Back to his underwhelming performances at the youth categories, Khvostov couldnt elevate Russia from mediocrity, and didnt look quite like the intriguing player that surprised this past season with some nice outings in the Euroleague. Obviously he didnt dominate in this tournament, but he didnt even try. The best thing we can say about him is that he looked happy enough keeping a relatively low profile, filling the role of a distributing guard while saving a big chunk of his scoring efforts.

Anyway, regardless of his attitude, he doesnt need to shine much in order to showcase his talent on the court. Hes a player that feels the game, for whom basketball comes very easily. Feeling extremely comfortable with his dribbling, hes a point guard, perhaps not greatly athletic, but with enough quickness and excellent footwork to beat his match-ups on a regular basis and create good opportunities for him and his teammates. Khvostov sees the court very well, finding his teammates with consistency. He doesnt need to attack his opponents to make a good pass, and didnt look obsessed with adding definitive passes to his stat-sheet. However, despite finishing among the top-5 in assists, he could have led the ranking as his teammates wasted too many of his passes by missing open shots served up by him. He certainly looked unselfish, but lacked the fire and passion to really involve his teammates in a winning dynamic.

We saw some of his mid-range jumpers off crossover dribbles, a trademark shot for him, but considerably less usual than in past occasions. He showed nice accuracy from the perimeter, in general again proving to enjoy a very solid stroke. Streaky on defense, often visibly disinterested, this is nothing new in his showings at youth categories. Anyway, hes yet to grow physically, because he still displays a pretty skinny body.

Like many Russians, Khvostov is a question mark inside another question mark. You can see the talent there, but you can never assure that he will have the character, work ethic and mental strength to take advantage of his potential in the future.
Read full article

Luis Fernández
@DraftExpress
A naturally talented playmaker, Khvostov is a skinny kid with nice quickness who loves to play off the dribble. Hes a good ball-handler with both hands, and more than your typical quick guard who tries to explode his first step, he prefers to use fakes and crossover dribbles to get by his match-up. Quite balanced in terms of his passing or scoring attitude, hes a smart guy who recognizes good options to dish out the ball. Still hes looking more scoring-oriented than expected in Dynamo Moscow. Considering his youth and the level hes facing, he is quite fearless on the court, as he doesnt hesitate to attack the basket and go all the way for the layup. Still, perhaps his most typical move is the crossover followed by a mid-range jumper executed off the dribble, where he enjoys solid accuracy. In general, hes a nice shooter with range out to the three-point line, and solid mechanics. On defense hes as reliable as his strength allows him to be. He can usually stay in front of his match-ups, but suffers quite a bit going through screens. Besides, he takes care of the passing lines, coming away with a few steals in the process.

Of course, Khvostov isnt always free of mistakes, eventually forcing his actions too much, particularly in motion while penetrating, as his window of slashing opportunity sometimes closes sooner than he expects and he runs out of options in the drive. Still, legendary coach Dusan Ivkovic is patient with him and doesnt pull him off the court after every mistake. On the contrary, if Khvostov enters the game, chances are he will remain on court for a fairly extended period of time, even with the game on the line, which only helps build his confidence. This last week, he received his chance with the game tied in the beginning of the fourth quarter, and never left the floor until the game finished, helping to clinch an extremely important victory for Dynamo Moscow against Aris TT Bank in Thessaloniki, in the opener of the Top-16 round.

Khvostov is perhaps not a player who is oozing with potential, particularly because his athleticism doesnt look that great (although hes still physically underdeveloped and will be able to improve it), but he looks like a very nice point guard in the making, especially if he keeps displaying the same attitude he has been showing in this seasons Euroleague.
Read full article

Kristian Hohnjec
@DraftExpress
It all started with the opening Euroleague game of the season, when legendary coach Dusan Ivkovic decided to use teenage sensation Khvostov in a surprisingly close game against Euroleague newcomers Rhein Energie. Khvostov entered the court with more determination than even Ricky Rubio. He dazzled his opponents with his passion and killer instinct, earning fouls with his very quick movement, his nerve and quick first step. He should be moving more when without the ball, but he still found many shooting opportunities, even making an open shot, showing good mechanics and confidence. He was fought for every possession on defense, was coming from behind to steal balls and was using every inch of his body to prevent his opponents from slashing. He has a natural feel for the game, already knowing very well how to use his body to penetrate and being able to finish with his right hand, even when he is fouled. Well determined, yet not as team-oriented as one would expect given his young age, this game was the only one that Khvostov was a real factor for Dynamo. However, it was more than enough to notice his potential against senior competition. In other words, he grabbed his chance and never let it go.

As for his drawbacks, there are many holes to fill, but he isn't more than a kid and he has long ways to go. His thin frame may not be growing much. He is thin and weak and the bad news is that if he gains a lot of weight, he may be losing his nice mobility. As for his point guard skills, most would swear that Dimitriy can pass. But since we don't see it; they can only make this hypothesis, because he sees the court well. He is so confident with the ball on his hands and maybe thinks too highly of himself, meaning he doesn't really come out with that many assists, or at least as many as he should be providing his teammates with. A good idea would be to focus on that part of his game in the limited playing time he will be getting during the top-16 round and leave the offensive show for the Russian Superleague games. Right now, his task is to keep growing and improve his playmaking abilities, because otherwise, he may be seeing a step back in the following months of the year, especially with so many scouts checking his game in the upcoming U-18 Euro Championships.
Read full article

Luis Fernández
@DraftExpress
Our last feature coming from the 1989 excellent playmaking class, Khvostov is a talented player who already had left some drops of his remarkable skill set last year in the European U-16 Championships. But hes also a poster boy for the attitude of the Russian team, playing with (what appeared to be) not much commitment for the winning cause.

Khvostov is more of a classic playmaker than most of the previous guys mentioned. He can really pass the ball in various situations, showing very nice court vision. A good ball-handler, he also has good quickness to beat his man off the dribble. One of his classic moves is shooting off the dribble from the mid-range area, but he can also dish the ball taking advantage of split defenses. Hes a pretty nice shooter with three point range. Also a good performer in pick and roll situations, Khvostov can really play off the dribble.

Still immature physically, Khvostov is a skinny guy who needs to add some strength to his body. However, he has the right size for the position and solid, albeit not great, athleticism; hes not a high-flyer, but hes a fluid guy.

Khvostov sometimes looks a bit cocky, but its clear that he certainly has talent. Still, to get to the top level, he will need to use a lot more effort on court. Anyway, for a first-year junior, he hasnt fared that bad. Next year, he will be expected to become the go-to player in this team, and he will need to show some more leadership skills.
Read full article

Luis Fernández
@DraftExpress
There are little doubts that we face in Khvostov a very talented point guard, a guy with a natural flair to play the game. At 6-3, he enjoys nice size for his position, while he's quick, even if not an outstanding athlete. Being an excellent ball handler, he can really operate off the dribble going one on one against his defender or in pick and roll settings. He shows a sweet mid-range stroke after unbalancing his match up with some direction changes, although he hasn't been prolific in this department in the championship. He's also an excellent passer off the dribble in slashing situations, but also a nice one feeding from the perimeter. The guy has some serious court vision.

However, and this is where the comparison with his team kicks in, Khvostov shows a rather questionable attitude. He's a cocky guy with poor leadership skills and limited effort on the court. He rarely gets his teammates mentally involved and his defensive display is just below average. Of course, the poor Russian coaching hasn't helped him a bit, nor any of his teammates, to take this tournament seriously.
Read full article