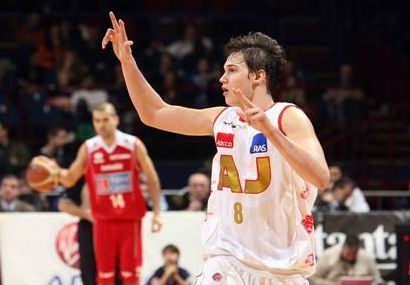 Last week we devoted our attention to the Spanish Kings Cup, but it wasnt the only Cup competition going around in Europe. Actually the biggest news draft-wise was happening in Italy, where Danilo Gallinari delivered an impressive exhibition in the Coppa semifinals, extended with another terrific showing in the Italian Lega this past weekend, which has left us no choice but to select him as Player of the Week.

Armani Jeans Milano faced VidiVici Bologna in the Coppa semifinals. It was a very disputed game where Gallinari took over the offensive load of his team in what has arguably been his best performance as a professional. With 27 points (9/12 from the field), 3 rebounds, 3 assists and 4 steals, he led his team into an overtime that unfortunately was resolved in favor of the Bologna squad. Not even Benettons incredible run in securing the Cup could eclipse his awesome performance, a hot issue these days in Italy. 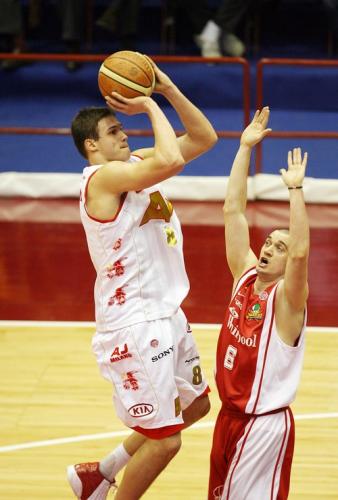 Obviously, this weekends game in the Italian League wont stop the buzz around him. Danilo scored 21 points and grabbed 3 rebounds to lead Milano to the victory against Whirpool Varese, which leaves his team comfortably placed in third position. With 10.5 points per game, hes the second best scorer on his team, only behind Joseph Blair.

Being only 18 years old, this is all flat-out impressive, and it only confirms our impression that hes currently the best under-20 player in Europe right now.

Gallinaris characteristics speak maturity any way you look at them, and hes still a guy with great potential. Hes really long, already in the 6-10 neighborhood, enjoys a good wingspan and a notable frame. Actually, hes a pretty strong player who holds his own against top international competition. Its interesting to note how in both games, Gallinari shot a combined 21/22 from the free-throw line. It speaks wonders about his free-throw shooting (obviously), but particularly about his ability to force fouls. Despite being only 18 years old, hes rather aggressive in terms of attacking his rivals, precisely taking advantage of that strength and frame. He uses his body really well while slashing, which paired with his footwork, ball-handling, ability to finish near the basket, basketball IQ and even his excellent size, helps him to easier see the court, allow him to keep perfect control of the situation and take good decisions in motion.

His incisive game might come as a surprise for anybody watching Gallinari for the first time, as the very first impression he usually leaves is a bit disappointing in terms of athleticism. But as we have stated often here in DraftExpress.com, its a deceiving impression, because and as soon as he gets into game situations, he showcases nice quickness and some hops. Hes surely not a top-notch athlete, but a very fluid one who is smart enough to maximize his athletic gifts. So at the end of the day, hes going to beat his match-ups off the dribble on a regular basis, while on the other end of the floor he proves to be a very reliable defender with nice lateral mobility.

A solid shooter, even with the ability to create his own shot, a nice passereverything is in place in Gallinaris game. The fact that hes such a big perimeter player, so talented and intelligent, leads us to think that he will be able to adjust to any level of basketball hes thrown in, even in a very athletic league as the NBA.

Dimitriy Khvostov, one of the few pleasant surprises in this years Euroleague when it comes to youngsters. The Russian point guard is the only 1989 European player seeing playing time in top international competition, and he hasnt looked bad at all. At least, he has certainly delivered a greater effort on court than what he usually displays in his junior performances.

A naturally talented playmaker, Khvostov is a skinny kid with nice quickness who loves to play off the dribble. Hes a good ball-handler with both hands, and more than your typical quick guard who tries to explode his first step, he prefers to use fakes and crossover dribbles to get by his match-up. Quite balanced in terms of his passing or scoring attitude, hes a smart guy who recognizes good options to dish out the ball. Still hes looking more scoring-oriented than expected in Dynamo Moscow. Considering his youth and the level hes facing, he is quite fearless on the court, as he doesnt hesitate to attack the basket and go all the way for the layup. Still, perhaps his most typical move is the crossover followed by a mid-range jumper executed off the dribble, where he enjoys solid accuracy. In general, hes a nice shooter with range out to the three-point line, and solid mechanics. On defense hes as reliable as his strength allows him to be. He can usually stay in front of his match-ups, but suffers quite a bit going through screens. Besides, he takes care of the passing lines, coming away with a few steals in the process.

Of course, Khvostov isnt always free of mistakes, eventually forcing his actions too much, particularly in motion while penetrating, as his window of slashing opportunity sometimes closes sooner than he expects and he runs out of options in the drive. Still, legendary coach Dusan Ivkovic is patient with him and doesnt pull him off the court after every mistake. On the contrary, if Khvostov enters the game, chances are he will remain on court for a fairly extended period of time, even with the game on the line, which only helps build his confidence. This last week, he received his chance with the game tied in the beginning of the fourth quarter, and never left the floor until the game finished, helping to clinch an extremely important victory for Dynamo Moscow against Aris TT Bank in Thessaloniki, in the opener of the Top-16 round.

Khvostov is perhaps not a player who is oozing with potential, particularly because his athleticism doesnt look that great (although hes still physically underdeveloped and will be able to improve it), but he looks like a very nice point guard in the making, especially if he keeps displaying the same attitude he has been showing in this seasons Euroleague.

Marco Belinelli continues to be red hot in the Italian League, and what is surely more important for him, Climamio Bologna has finally snapped a three-game losing streak with a victory against Upea Capo DOrlando. Marco went for 22 points, 4 rebounds, 2 assists and 3 steals. Its the second time this season in the Italian League that he manages to net more than half of his three pointers (5/9). In the last eight games of the domestic competition, he has always reached the 17-point mark, averaging 20.6 points in that span, while shooting an excellent 46.2% in three-pointers. Theres a clear and direct relation between his perimeter accuracy and his scoring production, because thats the foundation of his game at this point.

Zoran Erceg, after being a key part in FMPs triumph in the Serbian Cup, completed an excellent eighth-final round for his team in the ULEB Cup, with 23 points, 4 rebounds, 2 steals and 2 blocks in the second game (and victory) facing Gran Canaria Grupo Dunas. Erceg averaged over 20 points in this round against the Spanish team, and now Mario Austin and Hapoel Jerusalem await FMP in the quarterfinals.

Damjan Rudez scored a season high 26 points, adding also 5 rebounds, 5 assists and 2 steals in a loss against Zadar. Its one of the best games for Rudez in a campaign filled with up and downs, as he hasnt been able to find some consistency all season long. The situation of his team Split doesnt help either: with only two wins, they are tied with Geoplin Slovan for last position in the Adriatic League.

Uros Tripkovic seems to be in the process of recovering some scoring power in this disappointing season for him. He still averages fewer points than last year, but has at least scored in double digits in the last three games in the Adriatic League. This weekend he had a season-high 28 points, with 3 rebounds and 2 steals, leading Partizan to the victory over Zagreb, while leaving the team just one victory shy of the Balkan leadership.

Luksa Andric hasnt been able to transcend from a pure complementary role to something else. To see him executing any sort of move with the ball is becoming a rare luxury, while he rarely shoots the ball, so his scoring numbers are suffering from it. He hasnt been able to score in double digits since December 3rd, considering both the Euroleague and Adriatic League (meaning 16 consecutive games). Hes a fairly big guy, very mobile and who provides nice intensity, but hes not being able to translate these tools into useful enough prodction for his team.

Goran Dragic has been injured for a weeks now. He didnt play this weekend in the ACB League or in the previous game for Polaris World Murcia. He has a fracture in his finger, and will remain sidelined for a couple of months. In upcoming roundups, well try to take a look back at his current season in Murcia.
Read Next...