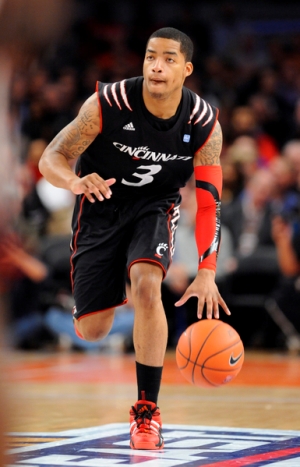 Lance Stephenson's decision to leave college after his freshman year opened up minutes on the perimeter for the Cincinnati Bearcats, with Dion Dixon being the primary beneficiary.

The 6'3 shooting guard saw his minutes increase substantially his junior year, from 15.8 minutes per game his sophomore year to 26.8, becoming a regular starter for the first time in his collegiate career. The guard responded well for the most part, increasing his scoring (18.1 points per 40 minutes pace adjusted, up from 12.3 the previous year), while substantially increasing his efficiency.

The main improvement in Dixon's game was his development as a set shooter, something he had struggled to do consistently in years past. According to Synergy Sports Technology, Dixon averaged 1.212 points per possession, a considerable improvement over the mediocre numbers he put up his freshman (0.805) and sophomore (0.719) campaigns. The improvement has allowed Dixon to more seamlessly fit into the offense, a key in projecting him to the next level as he does not appear to have the point guard skills to run a half court offense for an extended period of time. It also allowed Dixon to raise his efficiency considerably, from a 45% true shooting percentage his sophomore year to a much more respectable 54% his junior year.

The other main change in Dixon's role last year was that he played more minutes as a backup point guard than he had in years past, based more out of necessity than an expansion in his skill set and his ability to run the point. Cincinnati had very little behind Cashmere Wright at the point guard spot and relied on Dixon to handle the ball in the half court more than he may be suited for. Dixon is a good ball handler, and having the ball at the top of the key allowed him to be used in more pick and roll sets than he had in previous years, and opened up some scoring opportunities for him that were not previously there.

That being said, Dixon is far from a natural point at this stage in his development, and his pure point guard skills left something to be desired. With the arrival of incoming freshman GeLawn Guyn and Jeremiah Davis Cincinnati should have more options at backup point guard, and this should allow Dixon to play primarily as an off the ball scorer, his more natural role.

While this development should allow Dixon to play more to his strengths, it also makes it unlikely scouts will be any more assured of his potential to run an offense, even if only for brief stretches of a game, going forward. Standing at 6'3 with reasonably long arms Dixon has enough size to play stretches at the off guard position, but if he could show increased comfort running a half court offense it would be easier to find a role for him at the next level.

Dixon is fairly good at running out in transition, and this is where he probably shows the best recognition as a passer. He's a solid defensive rebounder for his size, and has the ball handling and quickness to lead the break.

In terms of driving to the basket, Dixon has an average first step but shows the ability to change direction and speed, with good body control, elevation, and touch around the hoop, although he could do a better job of drawing contact in half court sets, often times avoiding contact with finesse moves around the basket.

Defensively, Dixon can be a pest on the perimeter, playing in up in the offensive players face and possessing quick hands, but his size would be an issue at the next level if he is playing the off guard position as expected. He also tends to get lost off the ball on occasion, losing focus of his man, but this is something that can probably be corrected with the proper attention given to it.

Dixon's biggest problem may be the lack of one definable skill set that makes him stand out as a prospect and succeed despite his lack of a true position. He's a solid athlete, a pesky defender, has good body control and an improved pick and roll scorer, but he doesn't truly excel in any of those areas. Dixon's improvement last year, particularly as a catch and shoot player, has put him on the radar as a prospect. It's going to be imperative that he shows continued consistency as a set shooter, but an improved ability and comfort level running a half court offense, something he has yet to really show, would do wonders in projecting him to the next level.
Read full article