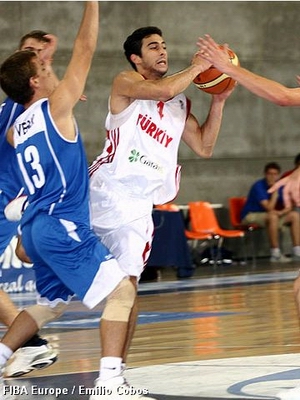 Bradley Thayer
@DraftExpress
Scouts love Balbay's energy-level, defensive effort and enthusiasm, and all mentioned how good of a teammate he was cheering on his fellow campers from the bench. He may not have swayed the tide on his NBA prospects just yet, but surely made himself some money with all the high-level European executives that were in attendance. To take the next step in his career, Balbay will need to become a better shooter and all-around scorer, but his performance here in Treviso was very positive.
Read full article

Luis Fernández
@DraftExpress
Turkey couldnt repeat the 2005 miracle winning the U-16 category. Actually, this summer they were far from contenders. The team wasnt that greatly talented then and it lacked some comparable potential to other squads. Balbay was the most important guy in 2005, but inserted in a well-oiled engine where many guys stepped up, his prominence on the team even grew for this championship.

Balbay was probably too much of a scoring point guard in this championship. He was the clear-cut go-to player, splitting defenses at will with his superb quickness and terrific footwork, and attacking the rim with aggressiveness, an outstanding leaping ability and great balance that allows him to hang in the air and execute creative layups with both hands and off contact. Besides some drive and dish stuff, we missed more distribution, more of a team-oriented game direction. As expected, he kept struggling with his perimeter shot. He can knock down short jumpers off the dribble, but his accuracy suffers as he gets closer to the three-point line.

As usual, his rebounding numbers are flat-out impressive for a six-foot player. Hes such an active and fearless player, with great athleticism and reactivity when it comes to getting off his feet, that hes very often the one coming away with the rebound. Hes equally intense on defense, showing excellent lateral quickness and aggressiveness attacking the passing lanes.

Headed to Texas, it will be interesting to see how they work on his flaws, as his strengths look rather American friendly.
Read full article

Luis Fernández
@DraftExpress
Little has changed in Balbays game. Hes the same old incisive and super-athletic guard. Consistently growing stronger, hes a penetration force that easily breaks defenses down looking for the opponents rim. Gifted with impressive legs, he can hang up in the air to perform acrobatic layups through contact with both hands, showing excellent body control in the air, while he can also dish the ball decently to open teammates. Very reactive on defense, he enjoys very good lateral defense and is very active in the passing lanes. Balbay also showed terrific activity fighting for rebounds. Always alert to the ball, he used his leaping ability perfectly well to grab a nice bunch of boards, even on the offensive end. Actually he enjoys such good leaping ability that sometimes he seemed to be playing volleyball when he managed to rebound his own missed shots.

On the negative side, hes yet to showcase any consistent shooting touch. Hes almost a non-factor from long-range distances. Also, he sometimes gets a bit out of control, and still needs to improve his distribution skills. Right now hes a bit one dimensional on the offensive end, always trying to go inside.
Read full article

Jonathan Givony
@DraftExpress
Of special intrigue to us was Brewsters new point guard, a 6-1 Turkish guard has yet to emerge on the radar screens of the recruiting services but has put together quite a nice resume playing at the Albert Schweitzer Tournament in Germany and U-18 European Championship this past summer. Balbay isnt really fully integrated on his team yet and only played 16 minutes in tonights blowout, but he dropped some heavy hints of his potential when he was on the floor, shooting 5-6 from the floor for 10 points. Hes certainly not your typical European as far as skills or athleticism goes, showing a great first step, excellent lateral quickness, and a pretty explosive vertical leap. He played very good pressure defense on Massanuttens point guard, coming up with a couple of steals to ignite his team in transition. He played both on the ball (not showing a ton as an organizer) as well as off the ball, where he really shined making sharp cuts to the basket and finishing with plenty of creativity and either hand. Speaking with him after the game, he seems to be very happy with his decision to play in the States, citing how much he likes the pretty New Hampshire area and saying that he enjoys playing with his teammates even though he surprisingly is coming off the bench. Balbay will be playing with Texas in 07-08 if he passes the TOEFL (test for International students) this year. He just recently signed. He would have been playing on this years team already but did not have the TOEFL score needed.
Read full article

Luis Fernández
@DraftExpress
After what Balbay showed in Mannheim early this year, these championships perhaps come as a big of a disappointment. He hasnt been able to keep some certain consistency in his game, highly contributing to Turkeys struggles all along the tournament, even if they finished in an excellent fourth final position. Still, being a first-year guy, its completely understandable. Next year, it will be the time to be more demanding with him.

The most outstanding characteristics of Balbay come from his amazing legs, probably the best in the tournament. Hes remarkably athletic, which he exhibits both in quickness and leaping ability, and extremely reactive. He gets on a regular basis to places where you dont expect him to get. He has also a terrific motor, staying active every single second he spends on the court. Physically-speaking, the biggest knock on him is the size. Although he seems to have grown a little bit from last summer, perhaps one inch, hes still around six feet; hes a relatively small guy, but extremely well built. Balbay shows excellent shoulders and a tough and ripped slim body. All in all, the combination of athleticism and physical set is not bad at all. He just needs the skills to go along with it. Does he have them?

Balbay is a terrific slasher. Its actually his go-to move on the offensive end. Hes an excellent ball-handler, and using his quickness, its quite easy for him to get by his defender. He can easily change gears and directions, being electric and rather unpredictable, delivering some impressive reverse moves at great speed. Then, his athleticism allows him to finish from high in the air, even using his body to gain space and deliver a layup. The guy enjoys an excellent hang time, which he uses, and abuses, on a regular basis. Balbay takes many decisions in the air, perhaps too many. He has that time advantage over his defenders to decide, but instead of using it as another resource to successfully sort out some complicated situations, he relies on it excessively. However, he gets a fair amount of good passes off the dribble, showing nice court vision.

For a small guy like him, the most glaring hole in his game might be his perimeter shooting, really poor for the guard standards. He has limited range, showing bad accuracy behind the arc. However, his shooting form does not look that bad. Theres certainly room for improvement there. A good defender, Balbay displays excellent lateral quickness and terrific activity, getting a high number of steals reading passing lines.

For Balbay, its a matter of gaining maturity and spreading his array of skills. He has some impressive characteristics that few guys share in the international scene.
Read full article

Luis Fernández
@DraftExpress
If anybody worked his way into consideration last summer, it was Dogus Balbay. The Turkish point guard was probably the best player in the winning team, and even if he's struggling trying to find some consistency in his game here at the junior stage, he certainly shows some very intriguing skills.

Balbay likely enjoys the most amazing legs in the tournament. He's athletic, reactive, electric we could say, but also very aggressive, making up for his limited size (he's listed at 6-0, although he could actually be an inch taller). Extremely quick and a very good ball-handler, he's a terrific slasher who breaks defenses down in restless fashion, being capable of finishing himself thanks to his excellent vertical leap as well as being a pretty good distributor for other teammates. However, he hasn't always taken good decisions, particularly in the blowout loss against Spain. Still not a reliable shooter, he's struggling behind the arc, and in general delivering a rather poor scoring effort.

On defense, he's the most active guy for Turkey, usually taking care of the best perimeter rival. Impressive lateral mobility, really quick hands, superb activity, he's all over the court, even chasing rebounds. He's a pretty significant thermometer for his team, and he will likely need to give his best in order to get the championship.
Read full article

DraftExpress
@DraftExpress
The reason why Turkey reached the finals. An extremely quick player, really high-class material, he loves to play fast, and his mind works as quick as his legs. Awesome in pick and roll situations, he enjoys an incredible ability to slash towards the basket, and excellent legs that take him really high. His reverse moves are perfect. He is left handed, and will be another very important player in the future. Despite being quite developed physically, hes only 17 years old. Also a very good defender.
Read full article