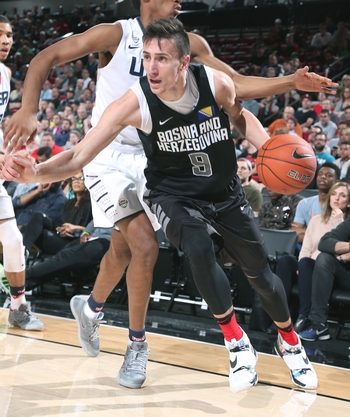 Strengths
-Good size for a wing at 6' 7 in shoes. Decent length with a 6' 9.75 wingspan.
-Has improved his frame. Now up to 195 pounds, 11 pounds more than he weighed at 2015 Eurocamp in June. .
-Fluid athlete.
-Creative passer. Can deliver the ball from different angles. Unselfish. Playmaking wing.
-Comfortable straight-line slasher. Good timing with fairly long strides. Has some craftiness as a finisher.
-Good basketball instincts overall. Able to read the ball off of the rim as a rebounder. Makes plays in the passing lanes. Smart cutter.
-Capable shooter despite some mechanical deficiencies. Can make a hesitation pull up or a spot up three. Slightly more comfortable off the bounce.

Weaknesses
-Frame still has room to improve.
-Very inconsistent shooter. Dips his body slightly to his left to get into his motion. Slow release. Unnecessary hitch just before his release. Turned down open spot ups due to lack of confidence in his jumper.
-Not a stiff but isn't a great athlete by NBA standards. Relies more on timing and creativity to get into the paint. Doesn't always explode to the rim. Will stop short for floaters.
-Can be loose with the ball. Turnover prone.
-Handle can improve to unlock his playmaking ability. A bit hunched with the ball. Not overly shifty.
-Playmaker on defense but is a bit hunched as an on ball defender. Has some struggles when on an island.
-Isn't all that engaged with his teammates.

Outlook Atic wasn't able to move the needle in a significant way at the Nike Hoop Summit. While he showed flashes, the 6' 7 playmaking wing wasn't able to string together enough impressive possessions to draw a huge buzz in the short-term. Atic is still an intriguing long-term prospect because of his size, playmaking ability and overall basketball instincts. A successful 2016-17 campaign could put him in better position going into 2017, but all in all he'll have to continue to evolve as a jump shooter and find more ways to score in the half court to do that.
Read full article

Atic doesn't have tremendous length relative to his height, but he has terrific size for a shooting guard nonetheless. He's gained 10 pounds since last summer as his frame continues to improve.
Read full article

Strengths:
-Good size for a shooting guard at 6-6 without shoes. Also has a solid 6-9 ¼ wingspan
-Fluid athlete
-Operated as the primary ball-handler and creator for Bosnia
-Pushes ball in transition. Plays a lot of pick and roll in the half-court
-Has a good first step. Plays with great pace.
-Drew 8.8 free throw attempts per-40 minutes
-Unselfish player with good court vision. Very good passer on the move. Enters ball into post nicely. Averaged 5 assists per-40 minutes at U18s
-Shows some touch as a shooter. Tosses in floaters
-Gets in passing lanes with timing and anticipation skills. Even comes up with some impressive blocks

Weaknesses:
-Only weighs 184 pounds. Needs to continue to improve his frame, which he already appears to be addressing
-Has very unorthodox shooting mechanics. Releases ball from side of head. Sometimes from fingertips.
-Took a lot of outside shots, but struggled to convert at U18s. Hit just 25% of 3-point attempts on large volume. Career 32%
-Hit just 57% of his free throw attempts at U18s. Career 60% FT% in 1600 minutes of action.
-Turned the ball over quite a bit at U18s (5 per-40, 19% TO%)

DraftExpress
@DraftExpress
Edin Atic is one of the youngest players here, but stood out nonetheless with his combination of skill and athleticism. He scored only 7 points in the first game shooting 3/11, but came up with 3 steals, rebounds, and assists while flashing the upside that has him penciled in as one of the more promising talents in the 97-born age group. A 6'7 shooting guard with impressive explosiveness, Atic is an opportunistic scorer who can put the ball on the floor a bit, shoot the 3, and make plays for other. Though he still needs to get stronger, this was a solid showing for him, which isn't entirely surprising considering he's already playing a rotation role in the Bosnian League for Spars Sarajevo, where he's holding his own, averaging 5 points, 3.7 rebounds, and 1.8 assists over 17.7 minutes per game. A force for Bosnia at the junior level, Atic is a player who figures to be a fixture on the radar of international scouts for quite some time considering he wasn't old enough to declare for the 2015 NBA Draft.
Read full article