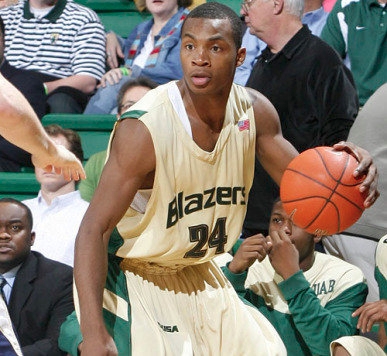 The Blazers have gotten off to a torrid 15-2 start this season, highlighted by wins over Cincinnati and Butler and are well on their way to challenging for the regular season Conference-USA title after winning their first three conference games. Part of the credit for the teams early success is due to junior transfer Elijah Millsap, who is in his first season with the program since arriving one year ago from Louisiana-Lafayette. The 6-6 combo forward and brother of Utah Jazz PF Paul has been a revelation for the Blazers, leading the team in scoring, rebounding and steals.

Millsap definitely possesses physical attributes that will attract pro scouts, starting with his length and well built frame. Dubiously listed at 6-6, but packing a solid 210-pounds and a terrific wingspan, he has the strength necessary to absorb contact on his way to the rim while still finishing plays in addition to being able to post up same size or small backcourt players. He is a very good athlete on top of that, showing the willingness to take advantage of his tools as well. Where he will really benefit against pro level competition though is in his tremendous body control that he has exhibited on a regular basis this season.

Millsaps offensive game is built around slashing to the basket at this point, something he does effectively against Conference USA-type competition. Millsap has decent ball-handling skills, exhibiting a low, controlled dribble that allows him to operate in traffic when attacking the basket in a straight line. His first step is quick enough that he can usually gain an edge against most college defenders, particularly when operating at the power forward position, where he currently finds the most success.

Not an amazing shot-creator when isolated on the perimeter in the half-court, Millsap has a tendency to push off with his free hand when executing spin moves and such, resulting a higher number of offensive fouls accumulated. As previously mentioned, it is Millsaps body control and ability to absorb contact that makes him such a handful in the lane, allowing him to get to the free throw line at a truly outstanding rate.

He seems to know where the basket is and does a nice job of staying square to the rim when flying through defenders in transition, but often looks out of control when operating in the half-court. Millsap ranks as one of the most turnover prone small forwards in our database, at nearly 5 turnovers per-40 minutes pace adjusted. Reeling in his aggressiveness and learning how to make better decisions with the ball will be very important for him moving forward.

Possibly his biggest asset would be his physical toughness, especially on the glass where he rebounds at an excellent rate, totaling 12.4 per 40 minutes, which ranks him amongst the top small forwards in our database. Hes a no-nonsense type player who is not afraid to throw his body around, something that certainly bodes well for his future.

There is still a good deal of work for Millsap to do as far as improving his perimeter game is concerned. He shoots a modest 32% from beyond the arc on just under three attempts per game, showing a smooth, quick release, but tending to fade away when firing. He looks comfortable shooting off the dribble at times, exhibiting a nice step back move on a regular basis, but his release tends to be a bit rushed and inconsistent against better defenders when on the move, and his shot-selection is just average at best.

Defensively Millsap is intriguing, showing great physical tools and aggressiveness, despite being somewhat of a tweener at this point. He posts nearly three steals per-40p, an excellent number, due to his length and anticipation skills, often jumping passing lanes for easy transition baskets at the other end. When faced with isolation sets against smaller players, he can make an impact thanks to his size and length, but doesnt appear to have great experience guarding on the perimeter, operating as more of a power forward collegiately. Continuing to hone his defensive ability will be paramount to his chances of cracking an NBA roster, as this will likely be his most primarily role if he is able to make it at the pro ranks.

Despite turning 23 this summer, Millsap is a player who may benefit from another year of school, not only because it will allow him to further develop his skill set, but it will give him the chance to make a bigger name for himself in the basketball community. He has proven himself as a solid but very inefficient scorer thus far at UAB, and his tremendous rebounding numbers will certainly win him the favor of many scouts. With that said, his game still has plenty of holes to it, primarily when looking at his ability to efficiently operate on the perimeter.
Read full article