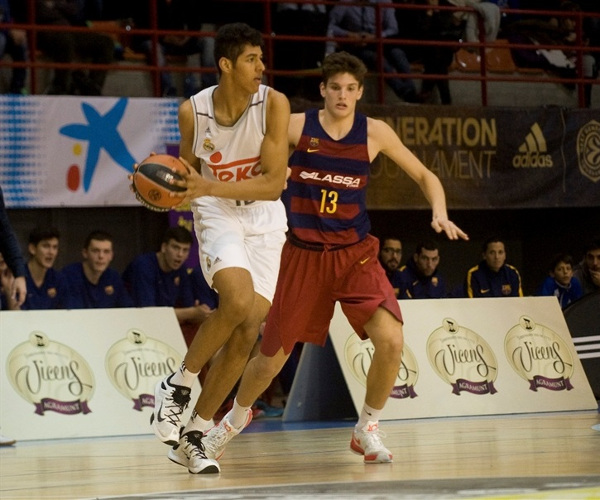 
Strengths
-Massive center prospect at 7' 3 with a 7' 4.75 wingspan, 9' 6.5' standing reach and 251-pound frame. Well-proportioned upper and lower body. Strong legs for a guy his size. Huge hands.
-More mobile than you'd expect. Can get up and down in transition once he gets momentum behind him.
-Solid hands. Has touch in mid-range spots. Sound mechanics on his free throw stroke. Should be able to develop a short turnaround game in time. High release point on his jump hooks. Touch with his right hand.
-Strong feel for the game. Knows who he is as a player. Well-coached. Doesn't try to play outside of himself. Can high low pass a little bit.
-Able to protect the rim by way of sheer size and length when he doesn't have to cover a ton of ground.
-Natural size makes him a factor on the glass - 12.2 rebounds per 40 minutes (lifetime).
-Professional approach. Great teammate. Going to compete and work to maximize his potential.

Weaknesses
-Not very quick twitch. Average leaper. Needs momentum behind him to get going.
-Struggles to cover ground defensively. Doesn't project as much more than a drop defender in pick and roll. Has a tendency to get stuck in no-mans land around the basket in rim protection situations. Instincts, awareness and reaction time can improve.
-Not all that physical as a post defender. Allowed smaller bigs to go through him at times despite his size advantage. Struggles reacting in time to the first move.
-Footwork is still a bit raw in the post. Gets knocked off spots. Fairly basic post repertoire - mostly right-handed jump hooks. Would benefit from a more consistent short turnaround, utilizing his high release point and touch. Holds onto the ball a split second too long on jump hooks. Can improve his left hand.
-Struggles to finish in traffic. Fairly anchored to the floor and isn't all that comfortable playing through contact.
-Nice feel but still learning how to playmake more consistently out of the post and from the perimeter.
-Upside is a bit limited by his average quickness, especially with the way the NBA is trending.

Outlook
Dos Anjos was rock solid all week in Portland, playing the game the right way, showing flashes of touch and making an impact on the glass by way of his size and length. Dos Anjos has come a long way over the years and is highly regarded in Spain as a very high character individual who really works at maximizing his potential. The 7' 3 Brazilian-born big man doesn't exactly fit the mold of a modern NBA center, as he's not going to be a switch candidate, stretch the floor, or play above the rim, but he's certainly draftable given his massive tools, approach to the game, touch, IQ and stashability with Real Madrid.
Read full article

DraftExpress
@DraftExpress
As big as Ikechukwu Obiagu is, Dos Anjos stands noticeably taller.  Among the taller players in our database all-time, Dos Anjos isn't quite as long as a player like Rudy Gobert or as physically developed as a prospect like Hasheem Thabeet, but still only 18 years old, his size allows him to be a difference maker inside and gives him intriguing potential moving forward as he gains experience, especially considering the strides he's already made to this point. His standing reach is among the longest measured in our database, comparing favorably to the likes of JaVale McGee, DeAndre Jordan and Gobert.
Read full article

Matt Williams
@DraftExpress
Scouts will also be keeping an eye on 72 Brazilian Felipe Dos Anjos, who had a strong showing at the NBA Basketball Without Borders Global Camp in February of 2016, and is in the midst of a solid year in the Spanish second division (LEB Gold) with Oviedo. Dos Anjos draws inevitable comparisons to Walter Tavares due to his similar physical profile, but is much further ahead of the late-blooming Cape Verdean big man at the same stage. Giants in Dos Anjos mold arent really en vogue in todays NBA game, but it will be very interesting to see what kind of progress the Brazilian has made with his already solid mobility and skill-level. If he can find a way to have a productive showing in an up-tempo all-star type setting, showing that the game doesnt move too fast for him against American athletes, particularly defensively, hell go a long way in helping his stock among NBA decision makers down the road.
Read full article

Outlook: Much improved Brazilian center who was brought to Spain when he was 13 years old. An interesting long-term project without a doubt. Not awkward or goofy like many young 7-footers his age. Has a lot of things you can't teach. Reportedly has made massive strides in the past year or two. Very productive at the junior level. Named MVP of the prestigious L'Hospitalet Euroleague junior tournament last month. Had his moments at this camp, even if he's obviously still a long ways away from reaching his full potential. Absolutely worth tracking to see how he continues to progress.
Read full article

Matt Williams
@DraftExpress
-Brazilian center Felipe Dos Anjos will be the tallest player in attendance. The 7'2 center from Real Madrid has impressed in junior play, winning MVP honors at the Adidas Next Generation Tounament in L'Hospitalet earlier this month, and is very well regarded in Spanish circles. His excellent size, length, mobility, budding skill-level and outstanding (although underdeveloped) frame will make him a prospect scouts will be monitoring closely in Toronto.
Read full article