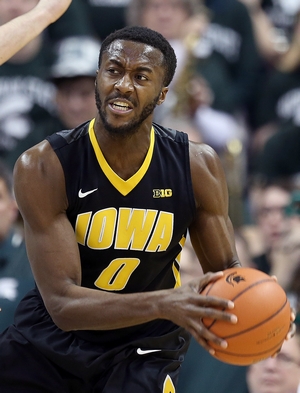 Gabe Olaseni flashed both his intrigue, and his limitations, during the semi-final round at Portsmouth.

A 6'10 athlete who picked up the game after a late growth spurt, Olaseni showed the ability to change a game defensively, altering any and every shot he could get within close proximity to. And with his athleticism, length, quickness, and constant effort, that was far more than the 5 shots he was credited with blocking on the night.

Olaseni also crashed the glass on both ends of the court, and regularly beat his man down the court in transition, a combination of his speed and effort.

Yet Olaseni's lack of polish on the offensive end was on display as well, shooting just 1-7 from the floor and committing 3 turnovers, trying to make a couple of passes from the high post that, while well-intentioned, were not necessarily within his current skill set.

Picking up the game late and not playing many minutes for Iowa, Olaseni is a relative unknown for somebody who turned 23 years old earlier this season. While his skill level still needs a lot of work, his defensive tools and effort level are hard to ignore.
Read full article

A converted soccer goalie, who only started playing basketball at age 14 in his home country of England after a massive seven inch growth spurt, Gabe Olaseni was considered somewhat of a reach for Iowa when they plucked him out of Sunrise Christian Academy in April of 2011, after most of their other recruiting options had dried out.

He didn't do much to dispel that notion as a freshman, playing just 90 total minutes all season, before finally entering the rotation in earnest as a sophomore, seeing just under 11 minutes per game, averaging 2.7 points and 2.6 rebounds per contest.

Olaseni's junior year was a major breakthrough, as although he saw only 17 minutes per game in Iowa's crowded frontcourt, he posted very impressive per-40 minute averages of 11.3 rebounds and 3 blocks. Olaseni established himself as a legit rim-protector and one of the best offensive rebounders in the Big Ten, providing Iowa with major energy off the bench and being a real difference maker in some crucial in-conference victories.

While still somewhat underdeveloped physically, despite turning 23 at the end of this calendar year, Olaseni has nice tools for a big man, standing around 6-10, with a reported 7-3 wingspan, and excellent athletic ability. He runs the floor like a man possessed, with long, powerful strides that regularly help him beat opposing big men up the court, and has very nice overall mobility and agility, including a very quick second jump.

Not a major factor in Iowa's offensive game-plan, the biggest portion of Olaseni's touches came via the offensive glass, where he ranked third among all collegiate basketball prospects last year by hauling down an impressive six offensive boards per-40 minutes. Olaseni's long wingspan, quick second (and third) jump, and outstanding energy level give him a major advantage here, and he regularly uses his length to get his hands on loose balls deep inside the paint.

He's also somewhat of a target off cuts and pick and roll finishes, as he has very quick feet to set screens on the perimeter and then dive to the rim with terrific purpose. Olaseni is a good, but not great finisher at this stage, as his lack of strength and raw technique makes it difficult for him to convert plays in traffic in the ultra-physical Big Ten. He shows some flashes of ability at times with a raw jump-hook over his left shoulder, but isn't much of a threat to score with his back to the basket due to his average frame and skill-level.

Olaseni's quickness and intensity level helps him draw a huge number of fouls relative to his minimal usage, as he got to the free throw line nearly seven times per-40 minutes last year, and hit 73% of his attempts once there, making him a very efficient offensive player. While he's improved as a free throw shooter, his shooting range doesn't extend very far outside the paint, as he only hit a handful of mid-range jumpers last season, sporting a bit of a hitch at the top of his release and just average overall touch.

Where Olaseni is most useful at this stage is on the defensive end, where his length, mobility and intensity level helps him make a solid impact in the variety of defenses Coach Fran McCaffrey likes to throw out, particularly in their zone. He contests shots very well both inside the paint and on the perimeter, and acts as a legit rim protector by averaging 3 blocks per-40 minutes, the second best figure in the Big Ten. His quickness is a nice asset to have on the pick and roll, where he can step out and hedge and recover nicely, and sometimes still make plays at the rim even when the ball is pushed inside on a slip.

Olaseni's lack of strength allows stronger big men to overpower him inside the paint at times, and he struggles somewhat stepping outside the paint and staying in front of opponents who can attack him off the dribble. He's a little bit of a tweener in that regard, as he lacks some height and bulk for the center position at the highest levels, but might look like a bit of a fish out of water trying to guard perimeter oriented power forwards full time. Olaseni is just an average defensive rebounder on top of that, pulling down 5.9 caroms per-40 on that end of the floor.

Olaseni is a late-bloomer, only seeing his first consistent action this past season as a 22-year old junior who is still somewhat raw on both ends of the floor, which certainly isn't ideal from an NBA standpoint. With that said, his length, athleticism and intensity level are coveted traits scouts look for in role-playing big men, which makes him someone teams will certainly want to look closer as he finishes off his college career.

With 7-foot Iowa native and former Top-50 recruit Adam Woodbury still in the fold and going into his junior year, it's unlikely Olaseni will see his minutes grow substantially from last year. It will be interesting to see what kind of progress he's able to make this season, as teams will be wondering just how much upside he still has left considering his advanced age, even if he's relatively new to the game still.
Read full article