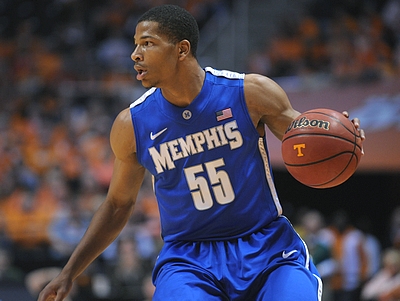 After bouncing around the junior college ranks during his first two collegiate seasons  Chipola during his freshman season and Garden City Community College for his sophomore being dismissed from both, Geron Johnson arrived at Memphis for his junior season hoping to put his past legal troubles behind him.

Johnson's physical and athletic profile presents a fair bit of intrigue, as the 6'3 ½ guard has a long wingspan (6'8.5", as measured at the Kevin Durant camp), strong upper body and incredible leaping ability. This makes Johnson quite a threat in transition, where he uses his speed and leaping ability to fill lanes with great effectiveness.

In the half court, Johnson has some intriguing, if incomplete, skills that could be developed over time. He gets a large portion of his offense in spot-up and catch and shoot situations, with mixed results. He gets good elevation on his jump shot and has good follow through, but struggles with consistency at times. He seems to have a little bit of extra motion in his lower body and can at times struggle maintaining his balance. That being said, he does have solid touch and this looks like something that could become more of a staple of his game with more repetition and better shot-selection, which is an issue with him at times.

Johnson also shows some potential working off the pick and roll as well, with a quick first step, strong dribble hesitation makes, and a real knack for splitting the trap and using that to get all the way to the rim, where he can elevate with a quick and explosive leap. His ability to shoot off the dribble is once again inconsistent but intriguing, with good elevation and follow through that could lead to future results if he is able to refine his balance and keep his form consistent.

Johnson is also a solid passer, often tasked with bringing the ball up the floor for Memphis and facilitating the offense in a combo guard role. He shows solid court vision and a good feel for making the extra pass and getting his teammates involved, posting a solid 4.6 assists per-40 last season, a good rate for a player who doesn't dominate the ball. Unfortunately he's also extremely turnover prone at the same time, coughing the ball up on a sky-high 27% of his possessions last season. For this reason it's unlikely that he'd be considered a point guard prospect at this time, even if his ability to create does add a degree of intrigue.

Despite his athleticism, Johnson struggles creating off of isolation sets, shooting just 26% according to Synergy Sports Technology. The biggest problem comes in the form of decision making and playing under control, as he frequently gets himself in tough situations, usually leading to a bad kick-out pass or low percentage shot. He also hasn't yet shown much ability to draw fouls at a high level, generating only 2.6 free throw attempts per 40 minutes pace adjusted and a free throw rate of only 0.23 free throw attempts per field goal attempt. Still, with his first step, athleticism, and body control, this could be an area where Johnson can improve upon down the line if he can do a better job of reading defenses, getting stronger at the rim, and making better decisions.

Johnson also shows strong potential on the defensive side of the ball. His 4.2 defensive rebounds per 40 minutes pace adjusted would be among the best marks in our top 100 database for shooting guards, as he shows good technique for a guard on the defensive glass and uses his athleticism to grab the ball at its peak. He also has very good lateral quickness, which combined with his long wingspan and solid upper body strength presents a good overall physical package, even despite standing just 6'3" in shoes and playing mostly off the ball. This frequently manifests itself in his ability to generate steals, as he averages a very good 2.3 per 40 minutes pace adjusted. His overall defensive ability is somewhat inconsistent, as he can at times struggle to fight through screens and can over-help occasionally, although both of these should be correctable with enough work and proper coaching.

Johnson's checkered past will undoubtedly be a major hurdle for decision makers to overcome when he's finished at Memphis, as he was kicked off of his previous two teams, from Chipola due to various incidents resulting from an arrest for possession of marijuana and from Garden City Community College due to alleged criminal trespassing, not to mention his multiple arrests.

That being said, if decision makers can look beyond Johnson's past  and he is able to stay out of trouble during his stay at Memphis  there is certainly a good amount of basketball talent underneath, even if still developing and somewhat inconsistent. Johnson's ability to stay out of trouble, as well as his ability to fit in with a deep guard rotation that now includes former Missouri guard Michael Dixon, will determine whether or not he is on the radar for the 2014 NBA draft.
Read full article