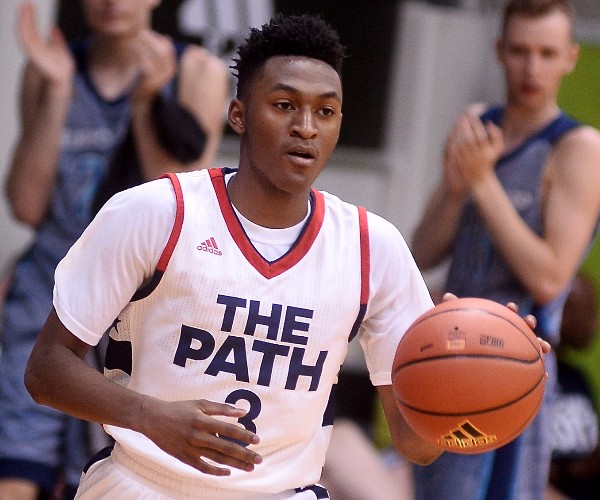 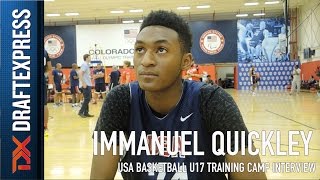 DraftExpress
@DraftExpress
Like Brown, elite 2018 point guard prospect Immanuel Quickley has packed on just 3 pounds from last year, weighing in at just 178 pounds.  However, at 6'2.5 with a 6'7.75 wingspan, Quickley had excellent size for a point guard to go along with his impressive athleticism.
Read full article

Mike Schmitz
@Mike_Schmitz
A 6'3 guard from Baltimore who has shot the ball well each of the last two summers on the adidas Gauntlet Circuit, Immanuel Quickley found his range early here, scoring 15 points on 5-9 shooting, including 3-7 from beyond the arc. Knocking down a spot up 3 from the corner and another off of a jab-step, while also making the defense pay for going under screens in the pick and roll, Quickley showed a strong all-around perimeter scoring arsenal.  He was perhaps even more impressive on the defensive end, applying great pressure on the ball and getting in the passing lanes frequently, showing impressive quickness.  Struggling a bit to finish inside and finishing the game with only 2 assists, still clearly adjusting to his new teammates and the intense half-court played by the older and more experienced European squad, Quickley has some things to work on in terms of his advanced playmaking and ability to read the floor, but made an outstanding first impression here on both ends.
Read full article

Strengths
-Very good physical profile for a point guard prospect who just turned 17 years old - 6' 2.5 with a 6' 7 wingspan. On the thin side (170 lbs) but has a good frame that will fill out nicely in time. Wide shoulders, proportionate upper and lower body.
-Fluid athlete with long strides. Likes to push in transition - 37.5% of his offense at the U17 World Championships and 26.7% of his offense at Adidas Gauntlet playing for Baltimore Elite U17.
-Solid first step. Able to play at different speeds and change directions impressively for his age. Uses sweeping crossovers going to his right or left. Not an overly flashy ball handler but has a nice foundation for this stage of his development.
-Shows potential as a facilitator - 7.0 assists and 2.6 turnovers per 40 minutes in seven Adidas Gauntlet games. Can see over the top, make a basic pocket pass, and drive and kick or dish.
-Should become a fairly reliable shooter once he raises his release point. Gets nice rotation, has touch. Shot 15-of-33 from 3-point range at Adidas Gauntlet. Can make an occasional rhythm pull up.
-Nice potential defensively due to his physical tools and solid effort level. Can cover a lot of ground on closeouts thanks to his long strides, fluidity and length. Will occasionally block jump shots. Quick hands, fairly sharp instincts in the passing lanes. Solid lateral quickness. Should become an impact defender as his frame fills out.

Weaknesses
-Had a poor showing at the U17 World Championships posting an 8.0 PER in six games while playing 18 minutes a game.
-Really struggles to finish in traffic and score inside the arc in general - 10.0 2P% (1-of-10) at the U17s and 29.2 2P% (7-of-24) at Adidas Gauntlet. More smooth than explosive, especially vertically. Doesn't absorb contact all that well around the rim. Can improve his off hand and add more craft in the form of speed finishes and floaters.
-Still learning how to put all of his skills together and use his fluidity, strides and ability to change speeds and directions in order to create for himself and others. Has a tendency to blend in at times. Can be more aggressive. Turns down open looks at times.
-Has some touch from the perimeter but is slow getting into his jumper and has a very low release point that leads to a wide variance of results. Needs to have time and space to get his shot off, which limits him in mid-range spots and while on the move. 4-of-16 from 3-point range at the U17s. 68.4% from the free throw line in 13 games in DX database.
-Could use some polish and experience in terms of his point guard skills. While he has some vision he tends to kill his dribble at times or telegraph passes. Jumps to pass. Not always as accurate as he could be with his delivery. Not very vocal on the floor. Can become more advanced of a pick and roll playmaker use both sides of the floor more frequently.
-Good effort overall on defense but he doesn't always fully sit down in a stance and slide like he has the tools to do. Not all that adept at using his body to contain penetration. Awareness off the ball comes and goes. Can improve fundamentally.

Outlook
Quickly was the odd man out of sorts during the USA's dominant run through the U17 World Championships. He was the only player to post lower than a 16 PER and didn't have much of an impact in his 18.4 minutes per game. His performance showed that he still has a ways to go in terms of shooting the ball consistently, scoring inside the arc, and becoming a more reliable point guard. With that said, this is only a six-game sample and there's still quite a bit to like about Quickley long term given his physical tools, potential as a shooter, ability to play different speeds, flashes as a playmaker and defensive potential. Quickly figures to end up at a high major program and is certainly worth tracking as he develops, regardless of his less than stellar performance.
Read full article