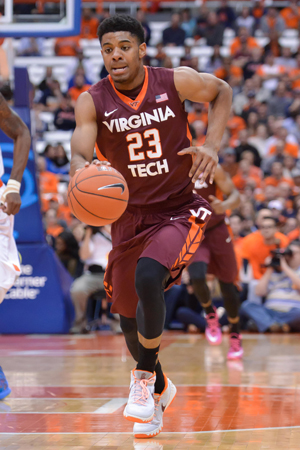 At the beginning of his high school senior season, Jalen Hudson of St. Vincent-St. Mary in Akron, Ohio announced his commitment to James Johnson and Virginia Tech. Five months later, Johnson was removed from his duties as head coach, replaced by Marquette's Buzz Williams, but Hudson elected to stay committed to the Hokies rather than reopen his recruiting process.

Hudson was not the most highly regarded prospect coming out of high school, as he not ranked as a top-150 recruit by any of the major scouting services. He played a variety of roles for Virginia Tech as a freshman, ranging from being tasked with bringing the ball up and getting team into their offense, to playing power forward in small-ball lineups, and everything in between. His minutes fluctuated wildly as well, as he played under 10 minutes in eight different contests, but saw as many as thirty minutes in other games, sometimes in the same week.

From a physical standpoint, there is a lot to like about him. He has a strong frame, long arms, and terrific athleticism, as he has nice quickness, a powerful first step, and is capable of finishing with impressive explosiveness around the basket. He does have average size for a shooting guard at 6-5, though.

Hudson proved to be a capable half-court shot-creator already as a freshman, which is somewhat rare among non-elite high school recruits. He can blow by opponents from a standstill without the benefit of a screen using purely his first step, and shows some developing ability to change speeds and keep defenders off-balance. He converted an impressive 57% of his 2-point attempts last year, and got to the free throw line at a nice clip as well. He can finish with both power and finesse, demonstrating nice touch on his floaters, and had a number of extremely impressive dunks in the half-court as well.

Hudson is still learning how to harness his shot-creation skill, which is certainly not that surprising considering he played the entire season as an 18-year old in arguably the most competitive conference in college basketball. He looks somewhat wild at times with his drives, simply lowering his head and trying to bully his way into the lane, renders him somewhat turnover prone. His passing ability and all-around decision making needs work, as evidenced by his extremely poor -4.98 PPR and negative assist to turnover ratio.

As a jump-shooter, Hudson was somewhat of a mixed bag as a freshman. He shows promising shooting mechanics, particularly with his feet set, getting nice elevation, with a quick release and good follow-through, and is capable of creating good looks for himself off the bounce as well. His shot-selection again, leaves a lot to be desired, though, and he tends to shoot somewhat of a line-drive jumper when he's contested and rushing his shot. Hudson converted just 28% of his 3-pointers as a freshman and 64% of his free throws, but the potential he showed as a shot-maker on occasion leaves some room for optimism.

Defensively, Hudson was not consistent at all as a freshman, which is likely the biggest reason why he often struggled to get off the bench for a team that went 2-16 in the ACC. When he's fully engaged and locked in to the task, Hudson can be a solid defender using his strong frame, length and athleticism. Unfortunately, that rarely seems to be the case, as he often looks stuck in half-speed, not playing with any real urgency. He gets beat off the dribble too frequently, will close-out in a lackluster fashion on the perimeter, and look slow to react to plays developing off the ball.

Considering his size, Hudson will likely need to develop into a lockdown defender to give himself a real chance at becoming an NBA player. Fortunately for him, he's in the right place to do so under a highly respected defensive coach in Buzz Williams, who sent a number of players to the NBA as the head coach of Marquette, many of whom are noted for their toughness.

Jalen Hudson showed his potential in small glimpses last year, scoring 32 and 26 points against Wake Forest and Duke respectively. He was also very up and down, which makes sense considering his lack of pedigree coming into college. With starting wing Ahmed Hill out following knee surgery, and another part-time starting wing electing to transfer, Hudson should have an opportunity to see more playing time if he can earn the trust of the coaching staff. His athleticism, ability to create his own shot and the fact that he's extremely young for his class could certainly him some NBA looks as his career moves forward.
Read full article