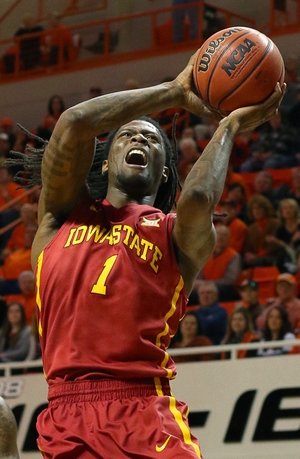 DraftExpress
@DraftExpress
-Jameel McKay isn't the tallest or bulkiest big man you'll find at just 6'8 without shoes and 210 pounds, but his 7'3 ½ wingspan and 9'1 ½ standing reach are both outstanding. That should allow him to comfortably continue to play the center position for whichever team he ends up with next, provided he can add some strength.
Read full article

McKay became eligible for the Cyclones in December and made an immediate impact, providing Iowa State with a much needed interior presence, especially defensively. McKay would work his way into the starting lineup by the end of the year and posted averages of 11 points, 7.6 rebounds, and 2.6 blocks on the season, helping Iowa State repeat as Big 12 Tournament champions, and winning All-Conference 3rd team, All-Defensive Team, and Defensive Player of the Year honors in the Big 12 for himself.

The defensive side of the court is McKay's calling card at the moment. Despite being only 6'9 McKay was able to block 3.2 shots per 40 minutes, pace adjusted, thanks in large part to good defensive positioning and excellent timing. His team defense goes beyond just blocking shots, however, as McKay is an excellent off the ball defender, making quick, decisive reads, timely rotations, and overall providing excellent help defense. That same effort, quickness, and good technique help McKay defend the pick and roll well, although he wasn't asked to do so all that frequently for the Cyclones.

McKay's physicality and effort help him defend the post as well, although his size presents some problems here, as he was frequently undersized for the position, both in terms of height and weight. McKay is wiry strong, and looks to have a frame that can add some mass to it down the line, but he did struggle at times to hold his position against some of the bigger competition he faced last year, and wasn't especially prolific as a defensive rebounder, averaging just 6.4 caroms per-40 minutes.

On the offensive side of the court, McKay is mostly an off the ball player, although a valuable one at that. He's a strong offensive rebounder, pulling down 3.7 offensive rebounds per 40 minutes, pace adjusted, with an 11.9% offensive rebounding rate. McKay is quick in space and is constantly fighting for position, and he has good hands and a quick jump which allows him to convert these opportunities at a high rate.

McKay also moves very well off the ball, both in pick and roll situations and also cutting to the hoop. McKay is a quick, agile big man who sees lanes opening up and finds holes in defensive rotations. He has good, soft hands to catch most passes and is quick off of his feet. While not an incredibly explosive leaper in traffic, McKay has decent touch around the hoop and doesn't shy away from contact.

Iowa State did try to use McKay as a post-up threat towards the end of the season, but to limited success. When McKay had a size mismatch in his favor he was able to take advantage, with enough touch on a hook shot over either shoulder to be somewhat effective. He also has a speed mismatch on most nights when defended by taller players, and at times was able to use that to his advantage to get to the hoop. That being said, when matched up against capable defenders, McKay's lack of polish down low really showed, and he was frequently forced into tough, out-of-control shots, as he simply lacked the diversity and overall skill level to combat them.

Another area where McKay needs to improve is from the perimeter, as Synergy Sports logged just four jump shots for him on the season, and the 59.8% he shot from the charity stripe doesn't inspire much confidence that the perimeter game is simply an unused asset in his arsenal. With McKay's struggles in the post against taller competition, being able to force his man to guard him away from the hoop, then take him off the dribble, could be a source of offense down the line, but he'll have to show considerable improvement in both his perimeter jump shot and his ball handling capabilities to truly make use of that quickness.

Despite being undersized for the next level McKay, who will play his entire senior season at 23 years of age, has a combination of quickness, effort, basketball IQ and shot blocking ability that gives him some potential as a role player. If McKay could continue to develop his frame, add some much needed muscle mass to take more of a beating down low, and continue to expand his skill-set, it would help convince decision-makers that he has enough of an all-around game to make the most of his role at the next level.
Read full article