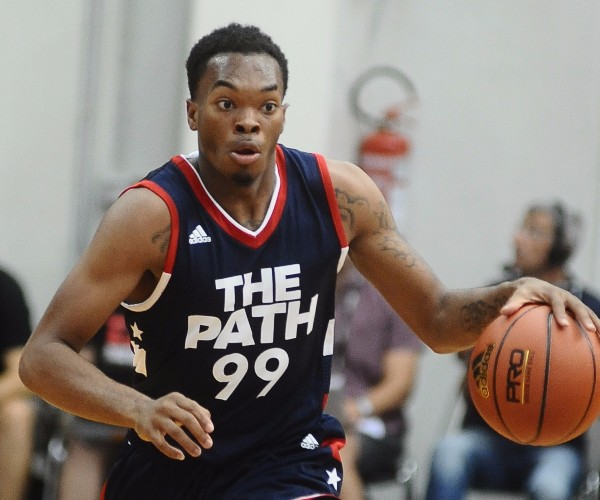 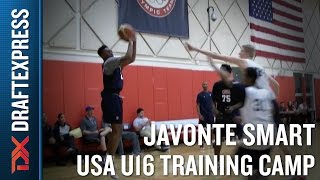 Strengths
-Excellent physical profile for a point guard prospect - 6' 4.5 with a 6' 7 wingspan and a strong, proportionate 190-pound frame. Can handle contact around the rim. Good rebounder.
-Not overly explosive but has a strong first step from a standstill
-Has improved his ability to change speeds and directions. Uses hesitation crossovers and in and out crossovers to beat the big defender. Strong hang dribble game. Can play out of ball screens effectively.
-Has the size to see over the top of the defense and facilitate - 6.9 assists and 1.9 turnovers per 40 minutes at FIBA U17 World Championships. Can use either hand to pass. Shows some occasional flair with no look drop off passes.
-Capable, although inconsistent, shooter out to three. Best with his feet set.
-Very good on ball defender thanks to his size, length and quick feet. Playing with good effort on the defensive end of the floor. Does a great job using his body to contain penetration. Should be able to guard smaller two guards as well in time. Good instincts playing the passing lanes.

Weaknesses
-More smooth than explosive. Lacks an extra gear. Needs a ball screen to get by an elite defender. Has to rely on his size and touch around the rim, where he made 6-of-13 shots at the U17s. Average leaper. Can add more crafty ways to finish around the rim. 42.9% from 2-point range at the U17s and 36.1% from 2-point range in 41 games in our database.
-Capable shooter but isn't all that consistent - 5-of-20 from 3-point range at U17s and 46-of-177 (26.0%) according to 41 games in our database. Flat-footed stroke from three. Doesn't get into his shot that quickly. Low release point. Ball comes off the side of his hand at times. Doesn't get that tight of rotation.
-How is he going to score efficiently in the half court? What's his bread and butter? 10.6 points per 40 minutes at the U17s. Doesn't get much separation in shot creation situations. Can add more ways to get to his pull up jumper. Improved handle but is still figuring out how to use it to get to high percentage spots on the floor.
-Doesn't get to the foul line all that often - 2.5 times per 40 minutes at the U17s.
-Can improve as a decision maker. Will settle for deep jumpers early in the clock or telegraph passes on the perimeter. 3.2 turnovers per 40 minutes in 41 games in our database. Feel for the game and basketball IQ are still progressing. Can be indecisive at times.
-Gets a bit loose with the ball. Commits unforced errors. Not the most vocal guard out there.
-Can get lost off the ball on defense

Outlook
Smart struggled to score efficiently at the U17s, posting the second-lowest PER on the team (16.0) while shooting 42.9% from 2-point range and 25.0% from 3-point range. The 17-year-old Baton Rouge native showed that he has room to improve his shooting stroke and shot creation abilities in the half court to make up for his so-so athleticism. Although he wasn't a prolific scorer, Smart still did some really nice things as a playmaker and defender. Albeit not dramatic, he's made strides in his game over the course of the last year and certainly has enough intrigue to continue evaluating thanks to his physical tools and overall versatility.
Read full article

One of the youngest players at the Nike Global Challenge, having just turned 16 in early June, Smart wasn't overly aggressive and in turn was one of the least productive players at the tournament filled with plenty of players two years older than him.

The 6' 4 guard posted a 1.6 PER and shot only 2-for-20 from the field, but even with his poor tournament from a production standpoint, the 16-year-old's blend of physical tools (very good frame, 6' 7 wingspan), court vision and potential as a shooter stood out in his 66 total minutes.

Smart shied away from contact in the paint and struggled to get it going from the perimeter, but he was able to show glimpses of the type of player he could very well turn into with one or two more years of experience. Smart is smooth with the ball and very comfortable playing at different speeds, an excellent skill when combined with his above average court vision when on the move. Smart also gets good rotation on his jumper despite his low release point.

Defensively, Smart has a ways to go in terms of awareness, activity and aggression, but as his experience-level and confidence both continue to increase, Smart should develop into one of the most talented point guard prospects in the country with potential on both ends of the floor.
Read full article

Mike Schmitz
@Mike_Schmitz
Javonte Smart (#5 Future150) looked an almost completely different player than the one we saw in October, as he's grown over an inch and appears to have made great strides with his skill-level. He's now a big point guard standing over 6-4 in shoes, with nice length (6-7 wingspan), a great frame, and terrific athletic ability. Smart is capable of operating at different speeds and changing gears in highly impressive fashion, being extremely difficult for opposing guards to contain in pick and roll situations. He finds the open man unselfishly, uses his body impressively to create space, and can throw in floaters with very soft touch.

His shooting stroke has nice potential, even if his release point is low, he was still able to knock down shots with his feet set and off the dribble throughout the week, which is something that is considered one of his biggest weaknesses. He's got great potential defensively with his size, length, and quickness, and overall looked like one of the best long-term prospects at the camp if he continues to progress.
Read full article