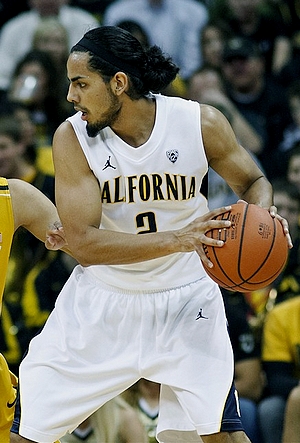 Coming off an All-Pac-10 first team selection and back to back All-Pac-10 defensive teams, senior guard Jorge Gutierrez has turned himself into an effective all-around player and key contributor for the California Golden Bears. His numbers (18.6 points, 6.5 rebounds, 5.9 assists, 1.7 steals per 40 minutes pace adjusted), while not a huge leap from his junior year, are very solid across the board and should once again have him in the running for an All-Pac 12 nomination.

Standing 6'3 with a solid build for a point guard, Gutierrez has been playing mostly a combo guard role at California, splitting running the offense with newcomer Justin Cobbs, a transfer from Minnesota. Gutierrez has good ball-handling ability and court vision, especially when he gets into the paint and in transition, doing a nice job on the drive and dish. While still not a pure point guard, he has improved his playmaking ability considerably since arriving at Cal, particularly in terms of cutting down on turnovers, which was a major issue in the past.

Gutierrez has solid quickness, changes direction well with the basketball and has a good feel for finding open spots in the defense, but his lack of explosiveness leads to some struggles to finish around the hoop. According to Synergy Sports Technology his 1.064 points per possession when finishing at the rim ranks just above the 40th percentile of college basketball, and it's likely he could have more problems finishing around the rim in the NBA.

Gutierrez struggles to make shots consistently from the perimeter, hitting just 32% of his attempts this season, down from 33% last season. With time and space, Gutierrez is capable of making jumpers with his feet set, but his mechanics seem to fall apart when rushed or pulling up off the dribble. His average touch may make it difficult for him to develop into a knock-down shooter in time, but it's imperative that he continues to improve in this area considering his limitations in other areas.

On the defensive side of ball is where Gutierrez shines, leading a very good California team on that end of the court. He moves his feet well, but most importantly displays a consistently high level of effort, intensity and awareness on this end of the court. He does a good job moving his feet laterally, fights through screens, rotates well and has very good hands. If there's one potential worry on the defensive end it's that at times he can get too aggressive on defense, gambling too much and getting himself out of position.

How much of this defensive ability translates to the next level largely depends on what position he ultimately ends up playing. He'd have good size and length to defend the point guard position, but would clearly be at a physical and athletic disadvantage if asked to play off the ball. Regardless, Gutierrez' willingness to defend gives him a leg up over some other players who are focal points at this level.

Gutierrez doesn't stand out in any individual area on the offensive end, as he simply is not a very skilled player, although he has worked hard to become an effective collegiate contributor. Considering that he does not possess jet-like speed, is not a great shooter, and is already 23 years old, it's tough to gauge what role he might be able to play in the NBA.

What Gutierrez does have going for him is excellent intangibles, effort level, and basketball IQ, something that he has already translated into becoming an excellent defender at the collegiate level. It's not out of the question that a team falls in love with his toughness, defense and attitude and asks him to fill a spot at the end of a roster, but it appears more likely that he'll need to find a niche in mid-level Europe.
Read full article

Jonathan Givony
@DraftExpress
There was not a player in attendance who was more fun to watch for basketball purists than Jorge Gutierrez, a scrappy combo guard from Mexico. While he did not stand out in any one particular facet of the game, he was able to do a little bit of everything and displayed all of the intangibles that college coaches dream of. Any time that Findlay Prep ran into a jam, he seemed to always find one way or another to pull them out of it, whether it be through drawing an offensive foul, coming up with a steal, or setting up a teammate for an open scoring opportunity. Actually an adequate scorer, Gutierrez showed off a decent first step and the ability to finish at the basket with either hand consistently. Although he did not hit any three pointers this weekend, he did prove that he could hit the 18 foot jumper on a consistent basis.

All weekend long, Jorge was placed on the most talented perimeter player that his team was matched against. Boasting excellent lateral quickness, toughness and defensive awareness, he showed his credentials as a lockdown defender. We would love to see how he plays without his Rip Hamilton-style face mask, since you could clearly see that it was bothering him all game long, even if it didnt stop him from making big plays.

With the vast majority of the nations top prospects already committed, do not be surprised to see Gutierrez land at a high major program near you. The defensive presence, basketball IQ, and intangibles that he presents make him enviable to virtually any coach looking for a guard to help his team. Presently Texas, New Mexico, UNLV, and Colorado State appear to be in the running for Gutierrez, but expect that to change if he is able to continue his outstanding play the remainder of the season.
Read full article